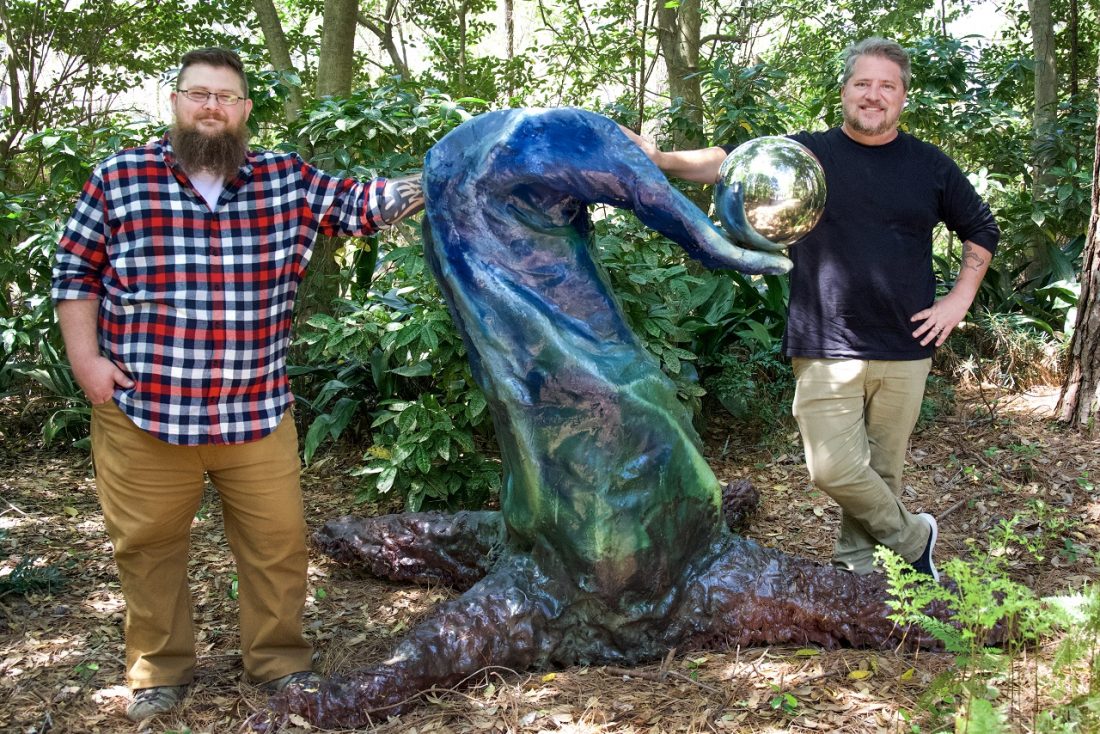 When Augusta University alumnus Scott Hardigree and his wife, Stephanie, purchased their North Augusta home with a luscious and expansive garden last year, their majestic yard inspired them to open their doors to a unique opportunity for local art students.

“I was an art student at Augusta University, but back when I first began it was Augusta College,” said Hardigree, who is the founder and CEO of Email Industries, an email marketing services company based in Augusta. “I was actually a communication major with an art minor. My goal was to cobble together a graphic arts degree, which I was pretty successful in doing. I graduated in 1997 and by then it was Augusta State University. Then, I started my first business in 1999.”

Over the years, Hardigree has stayed connected and involved with the local art community, especially in downtown Augusta.

“When my wife and I moved into our house in North Augusta, I began thinking, ‘Wow, wouldn’t it be great to reach out to the art department and work with the students to get some cool sculptures for the garden,’” Hardigree said, explaining the house’s gardens were developed by the former owner, artist Mary Alice Woodrum. “She had a passion for landscape architecture and really transformed this property. I believe we have something like 1,800 exotic plant species here. We absolutely love it. We feel like we’re sort of like living in a piece of art.”

Hardigree thought the sculpture students at Augusta University would be equally inspired by the tranquil gardens at his home.

“First, I thought it would be a great opportunity to develop some new sculptures in the garden,” he added. “And, the other side of that coin was, for the art students, it is a project that would look pretty cool on their resume.”

Hardigree began working with Scott Thorp, chair of the Department of Art and Design at Augusta University, and sculptor and art professor Brian Rust to develop a class project that would allow sculpture students to design and pitch a garden sculpture for the Hardigrees’ home.

“We agreed to donate $1,000 a year for a few years, and $750 of that goes to the student chosen to create the sculpture and the rest of it goes to supplies,” Hardigree said. “So, last semester, the students came out and they did a tour of the property. Afterward, they developed their ideas for their sculptures and made their presentations to me and my wife.”

While several of the proposed sculptures were impressive, Hardigree said one art student’s project immediately stood out from the crowd.

Senior art major Aaron Cummings’ design of a giant wave that had a base shaped like the roots of a tree simply spoke to him.

“When Aaron was here touring the property, he asked a lot of questions, like what were some specific things that I like,” Hardigree said. “I told him that I love trees and I grew up surfing in Florida at Fernandina Beach and I love waves. So, when the time came for the presentations, not only did we like what Aaron presented, he also had a 3D rendering of the sculpture, which was cool. You could tell he had put a lot of thought into the sculpture.”

After touring the Hardigrees’ extensive property, Cummings said the idea for his sculpture quickly came together.

“When Scott gave us a tour of the gardens, he was talking about the inspirations that he had when they decided to buy this property and a lot of it stemmed from when he grew up in Florida near the beach,” Cummings said, pointing to the many palm trees and tropical plants located on the property. “But he also really liked the magnitude of the trees and the density of nature around the home. So, I just kind of merged them together.”

“When you are at school and in class, you’re doing the assignments to get grades, but this was real. This sculpture is now a part of their home,” Cummings said, smiling. “And to see my sculpture go from about this 7-inch 3D model to a five-and-a-half-foot sculpture was awesome. It was really validating to be doing something not as an assignment, but doing something out in the community. It was a great experience.”

This is the second time the Department of Art and Design teamed up with a private individual in the community to give sculpture students this kind of real-life opportunity, Rust said. Turner Simkins, president of North Augusta Riverfront Company and the developer of Hammond’s Ferry in South Carolina, was the first to collaborate with Rust’s sculpture installation class.

“The whole concept behind installation is it’s often very site specific, so the students are designing the sculpture for a particular place,” Rust said. “Scott’s property is perfect because it’s like a huge, botanical garden that wraps around his house.”

The garden setting allowed him and his students to study the space and discuss the different elements that could impact an installation.

This time around, Rust said the project started early enough that the students were able to plan a budget, make a proposal and design the sculpture all within the same semester. Once the Hardigrees chose Cummings’s sculpture, the entire class came to help him complete the sculpture on time.

“It was nice that not just Aaron, but everybody in the class got to experience it,” Rust said. “They all got to experience the theoretical end of creating a sculpture and the design element of it. The students also got to see that people can actually make a living making sculptures. There are public commissions happening in every single state in this country. There are artists competing on the national and international levels all the time, so this class is about trying to teach by doing and giving all of the students a very real experience.”

Rust was thrilled to hear that the Hardigrees are planning to continue to participate in the sculpture class and offer this same competition in the years to come.

“Scott said he really wants to do it again because they have such a big piece of property and he was very happy with the whole process,” Rust said. “We definitely welcome the collaboration.”

Hardigree said he can’t wait to see what the next group of art students will design after visiting his gardens.

“I can honestly say Aaron exceeded my expectations and this project is super rewarding for me,” Hardigree said, adding that his daughter is also currently a student at Augusta University. “Looking back, the art department at Augusta University really helped me in my career by teaching me about visual problem-solving, so I want to be involved in this sculpture project in the spirit of giving back.”

He added, “I think it’s important to pay tribute to the people and places that have helped you succeed along the way. And the art department definitely helped me succeed in life.” 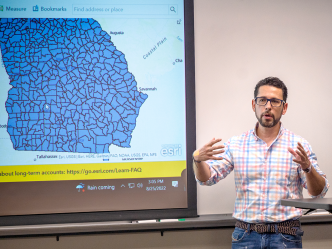