Scientists work to improve the diet and energy of failing hearts 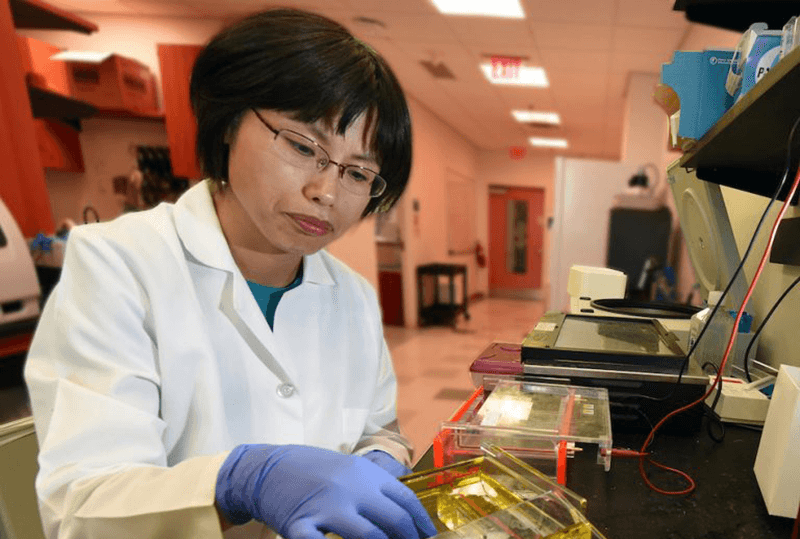 Our hearts use fat for fuel but as with the rest of our bodies, it’s all about balance.

Both too few and too many of the small lipid droplets that our heart cells burn for energy can cause heart failure, said Dr. Weiqin Chen, molecular biologist in the Department of Physiology at the Medical College of Georgia at Augusta University.

Chen wants to know if the dynamics between a gene that’s a known fat regulator and a protein that makes the lipid droplets available for energy hold clues for new ways to intervene in this common heart malady.

BSCL2 is a central regulator of fat metabolism for the body, including how much white, beige and brown fat we make. The protein ATGL, or cardiac adipose triglyceride lipase, helps determine how much lipid our heart cells can burn for energy. Chen’s lab has some of the first evidence that BSCL2 is a regulator of ATGL as well.

“Nobody has yet identified that this gene is critical in maintaining homeostasis of lipid accumulation in the heart,” she said. But there is human evidence that it might.

Mutations of BSCL2 gene are associated with Berardinelli-Seip congenital lipodystrophy, a rare condition in which patients essentially have no body fat. Since they lack normal fat deposits, fat ends up circulating in the blood, depositing in and on major organs like the liver and heart. Despite their trim state, patients often are insulin-resistant, at increased risk for diabetes, have high levels of circulating fats, called triglycerides, heart failure, liver failure and more.

In these individuals as well as mice where the gene is completely knocked out, Chen can no longer find the small lipid droplets inside heart cells that the heart needs for energy to beat. These lipids are still present in other major organs, like the liver. She thinks that distinction is a clear indicator that the gene has a specific function in the heart. A new $2 million grant from the National Institutes of Health is helping her determine just what it is.

“The hearts of the mice become bigger but do not store as much lipid as normal mice,” Chen said. Ironically, the heart also becomes more active at burning the lipids. In fact, the heart literally burns itself out.

“The heart becomes like a little fireball burning energy,” Chen said, and that ties back to ATGL.

Lipid burning for energy, called fatty acid oxidation, actually increases when BSCL2 gene activity decreases or ceases – as it does in her knockout mice –  because ATGL expression increases.

When scientists knock out the BSCL2 gene throughout the body or just in the heart, ATGL just keeps liberating the lipids that are there, and the heart becomes inefficient because it ultimately has insufficient energy, Chen said.  While the heart normally can also pull in lipids circulating in the blood, in this scenario the heart cannot pull in enough to sustain its function and begins to fail.

Impaired ATGL expression seems to have the same bottom line for a different reason: without sufficient ATGL, heart cells collect too many lipids, which also leads to heart failure.  “They work oppositely but have the same phenotype,” Chen said.

As the heart starts to fail in both cases, it temporarily shifts to glucose, a quick energy source that requires less oxygen use than lipids, but which normally provides only about 30 percent of the heart’s energy.  Fetal hearts actually use glucose as their primary energy source, but they don’t have to work as hard since some of their future functions, like pumping blood to the lungs, are provided by the mother.

However, mature cell powerhouses simply don’t function optimally on glucose and, like the lipids the heart manages to extract from the blood, the simple sugar cannot sustain heart function long term.

Chen notes that heart specific BSCL2 gene knockouts have the most severe resulting heart dysfunction, which also supports her theory of a direct link between the gene and ATGL.

Now she and her research team are working to better understand how lipid use is regulated in the heart and how improper regulation can lead to heart failure. While mutations in the BSCL2 gene or ATGL are unlikely in most of us, it could be that common problems like chronic stress can negatively impact their interaction and balance. “You have to maintain balance,” Chen said, whose ultimate goals include helping to do just that.

Increased lipid burning and freeing have been associated with heart failure in obesity and diabetes.