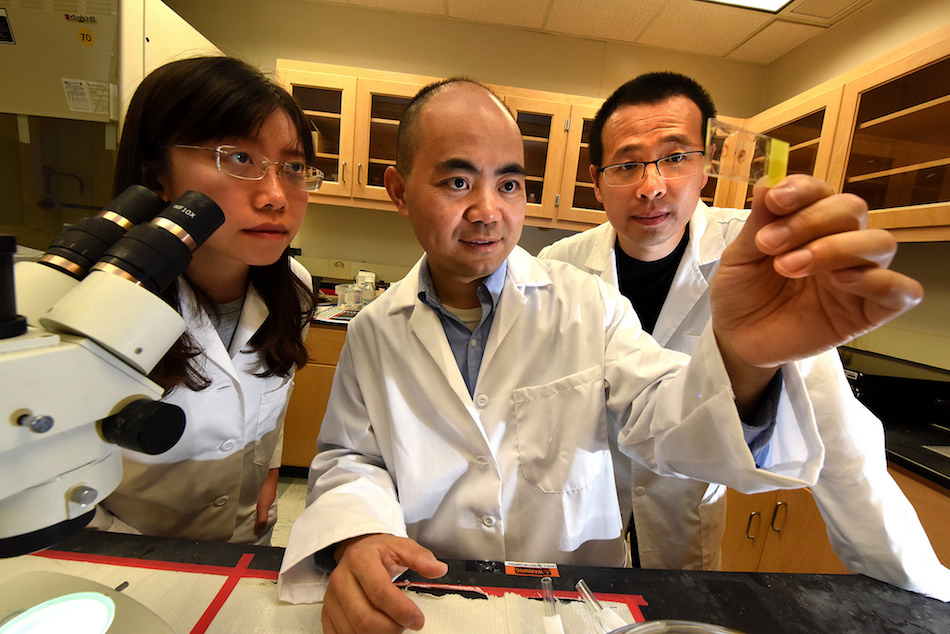 With age, the chromosomes of our cardiac stem cells compress as they move into a state of safe, semiretirement.

The typically long, coiled strand of DNA inside each youthful stem cell gets shorter and dense as we age, literally leaving less room for it to be cut or otherwise damaged and die, said Dr. Yaoliang Tang, cardiovascular researcher in the Vascular Biology Center at the Medical College of Georgia at Augusta University.

“If you condense it, it’s less responsive,” Tang said. “The cells look like they fall asleep,” he said of a scenario that plays out in aging stem cells all over the body. But that protective, condensing strategy also means a preconditioning treatment that will help stem cells make new blood vessels for starving heart muscle doesn’t have good access either.

Tang is principal investigator on a new $1.5 million grant from the National Heart, Lung and Blood Institute that is enabling him to restore the youthful length to the DNA just long enough to his get preconditioning therapy inside. Then, his research team will see what that does to the stem cell’s ability to revascularize heart muscle following a heart attack, improve heart function and possibly help avoid worsening disease.

“When the chromosome is open, it will make the cells wake up,” Tang said. His early evidence suggests that the rejuvenated stem cells will respond better to a short period of hypoxia – or reduced oxygen levels – that encourages them to make things that are good for the ailing heart. This includes vascular endothelial growth factor, or VEGF, that will pave the inside of new blood vessels; endothelial nitric oxide synthase, or eNOS, that will help blood vessels dilate; and placental growth factor that is highly expressed in the embryo and will also aid development of new blood vessels, called angiogenesis.

With age, the number of cardiac stem cells – which can form a myriad of heart tissue from actual heart cells to the blood vessels that feed them – decreases. Inside those that remain, expression of the enzyme EZH2 goes way up, which appears to contribute to the cells’ semiretirement. The drug DZnep, already used in patients to open up the DNA of cancer cells  and make them more vulnerable to cancer therapy, is one way to temporarily rouse the stem cells. Tang notes this shows there is a “druggable” target so his study findings should translate well to humans. MCG researchers also are using molecules called small interfering RNAs, or siRNAs, to ablate the enzyme EZH2 and see what happens.

Tang’s goals include learning more about how EZH2 is regulated and how it in turn, essentially turns down the responsiveness of aging stem cells. While his next round of studies will likely follow how many actual new heart cells are made by the temporarily rejuvenated stem cells, this time his focus is the growth of new blood vessels that will help reperfuse the ailing heart and would be essential to survival of any new heart cells.

His team will follow the mice one to two months to see what happens after cell transplantation, said Tang, noting that the response should be fairly rapid. Adding a fluorescent tag to the transplanted stem cells will enable them to see where the cells go, and sophisticated imaging technology will enable them to examine perfusion of the mice’s working heart. In his early studies, Tang has already watched the aged chromosomes extend then retract when treated with DZnep. Now his team is doing studies in both younger and aged cardiac stem cells to enable continued comparison of the two populations. In fact, Tang is optimistic their approach will also enhance the efficiency of the younger cells as well.

Tang was first author on a 2009 paper in the journal Circulation Research that showed a period of hypoxia, or low-oxygen levels, prior to transplant improved the ability of transplanted cardiac stem cells to reach the ailing heart and improve heart function.

Inside the heart, stem cells are accustomed to oxygen levels that are about five times lower than the ones they will experience when taken out of the body in preparation for a transplant. His hypoxia preconditioning takes oxygen levels even lower, to embryonic levels, when stem cells were busy making entire organs. The low-oxygen environ appears to put the cells into action mode, activating the protein CXCR4, which in turn, activates signaling pathways that enable beneficial things like cell growth and division and work as a sort of homing system so the stem cells can find their way back to the heart after transplant.

Those first studies were done in a younger mouse model. But typically it’s older patients who have heart attacks, and older stem cells, the researchers would find, were not as responsive to the hypoxia preconditioning, likely a reason that limited experience with cardiac stem cell transplants has not yielded the benefit to patients that laboratory studies would have indicated, Tang said.

Tang, an MD/PhD, who worked as a cardiac surgeon in China for more than a decade, says the cardiac stem cell therapy should one day be a good adjunct therapy for coronary bypass surgery patients and potential stand-alone therapy for patients with lesser ischemic heart disease or heart failure to rebuild the heart’s microcirculation, perfusion and function. The technique of reopening the chromosomes of aged stem cells of all types could also improve the efficacy other types of stem cell therapies, Tang said.