Scientists look for answers to taste loss with COVID 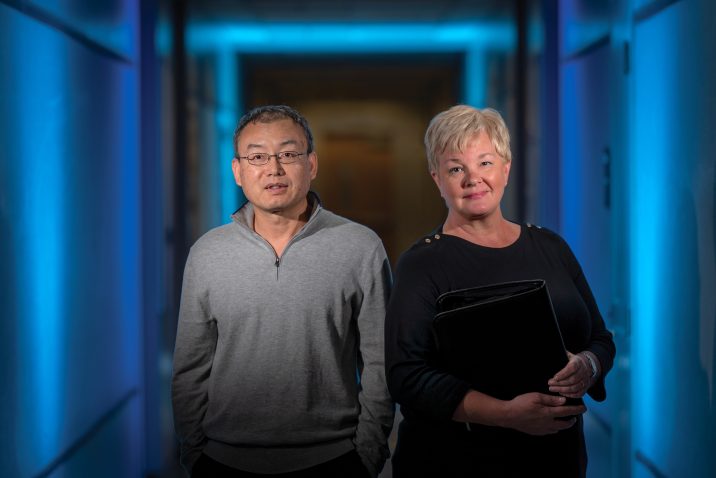 Up to 80% of individuals who’ve had COVID-19 report temporary or lasting changes in their sense of taste, and scientists are working to better understand the biological basis of why, including whether our taste buds are a direct virus target.

“We don’t know much about why this is happening,” says Dr. Lynnette McCluskey, neurobiologist and taste researcher in the Department of Neuroscience and Regenerative Medicine at the Medical College of Georgia at Augusta University.

In fact, it’s not certain that the tongue and taste buds even have the now well-known ACE2 receptors found on cells in the lungs, heart, kidneys, intestines and brain, which the spiky SARS-CoV-2 latches onto to gain access inside our cells, where it takes over their machinery to help produce more virus, McCluskey says.

That is part of what makes the new two-year, $423,500 Exploratory/Developmental Research Grant from the National Institutes of Health both timely and needed, McCluskey says of the new award she and Dr. Lin Gan, director of the MCG Transgenic and Genome Editing Core and Georgia Research Alliance Eminent Scholar, just received.

Their preliminary data suggests that both ACE2 and TMPRSS2, probably the most prominent molecule to help the virus infect cells, are highly expressed in the taste buds of lab animals, which would help explain why taste, like lung function, is such a common target for this virus.

“ACE2 expression really shows the potential for SARS-CoV-2 infection and we are going look at it using Lin’s mice from the taste buds all the way to the brain,” says McCluskey.

ACE2 is essentially unchartered water in taste research, she notes because, prior to the pandemic, it had been considered an “unimportant player.”

Rather the focus has been on the related ACE1, or angiotensin converting enzyme, which does as its name implies: cleaves the hormone angiotensin I to produce angiotensin II, a powerful constrictor of blood vessels, to help regulate fluid volume as part of the body’s renin angiotensin system. Subsequent studies have found it also has a role in taste function, especially modulating our taste of salt.

Taste studies of ACE2 to date have yielded interesting but early information, the scientists say. A recent small human cadaver study indicated that ACE2 is present on type 2 taste cells, which are the ones that sense the basic tastes of sweet, bitter and umami (savory), as well as the taste stem cells. While it’s known that human and mice ACE2 are distinctive, in fact mice cannot be infected with SARS-CoV-2, there are conflicting findings about whether ACE2 is even present in the taste buds of animals, never mind what they are doing there in mice or man.

“This is an exploratory, high-risk, high-reward grant,” McCluskey says, that should enable them to help grow more evidence either way.

Gan was among the first scientists to use CRISPR to remove mouse ACE2 DNA and replace it with human ACE2 material. The model reflects the mouse’s natural expression of ACE2, which will help answer questions like where ACE2 even is and what it’s doing there. As an example, they are going to use just a piece of the virus’ spike protein to attach to the human material to learn more about how or if that changes taste, a common method for exploring the binding of a virus without handling the intact live virus.

A second model enables them to remove ACE2 from any single tissue type they choose, like the lungs or tongue, to better understand what it does naturally throughout the body and any role it may play with infection, Gan says.

That model will also enable the scientists to really hone in on what ACE2 is doing, if anything, in taste buds. They want to know what happens to the number and function of taste cells when ACE2 is missing, and check to see what happens to the sense of taste, McCluskey says. If it’s present, they suspect its normal function is messed up by the viral infection, as it is in the lungs, which can become overwhelmed with inflammation, a mechanism that at the right amount is protective against an infection.

They know, for example, that ACE2, which normally sits on the cell surface, normally has an anti-inflammatory role, which is lost when the spiky virus binds to it. So they are looking at what happens to inflammation levels when ACE2 is missing, says McCluskey, one of a small number of taste researchers in the nation also trained in immunology. She and others have established that inflammatory cytokines are upregulated with other infections, sickness or injury, which can directly affect taste function.

It’s been known for decades than an upper viral respiratory infection, for example, can lead to taste loss, but that only happens in an extremely small percentage of patients, McCluskey says. “This is night and day. We have not encountered anything like this.”

Gan’s third mouse model fluorescently labels ACE2-expessing cells so the scientists can better see where they are throughout the body and potentially trace them from the tongue to the brain, a connection essential to us being able to enjoy our favorite pizza or milkshake.

The fluorescent tracing will enable them to see specifically where or if the receptor is present in the different taste cell types present, which include some that just support the other cells, those type 2 cells and type 3 cells, which are important for sensing sour and also for sending information to the nerves that connect with taste buds and ultimately to the brain, McCluskey says. The fact that they have developed the mice and are breeding them enables them to examine possible ACE2 expression starting with development, she adds.

“We don’t know which of those cell types have ACE2 receptor if any,” she says. “We want to know is there the potential for viral infection. Is it changing neurons in the brain that sense taste? Is that a mechanism for long-term taste loss or is it completely in the periphery,” she says, referencing the tongue and taste buds. “Are we changing the stem cells so that is why people with long-term taste loss don’t get their sense of taste back?”

At this juncture, they are not certain if taste cells are even lost with infection and if regeneration is happening if they are.

An early hypothesis for SARS-CoV-2’s impact on taste was that it was smell that was affected and taste loss was secondary, McCluskey says, noting that the sense of smell and taste are connected all the way up to the brain and probably simultaneous. “There are cells in the brain that light up only in response to taste and smell,” McCluskey says.