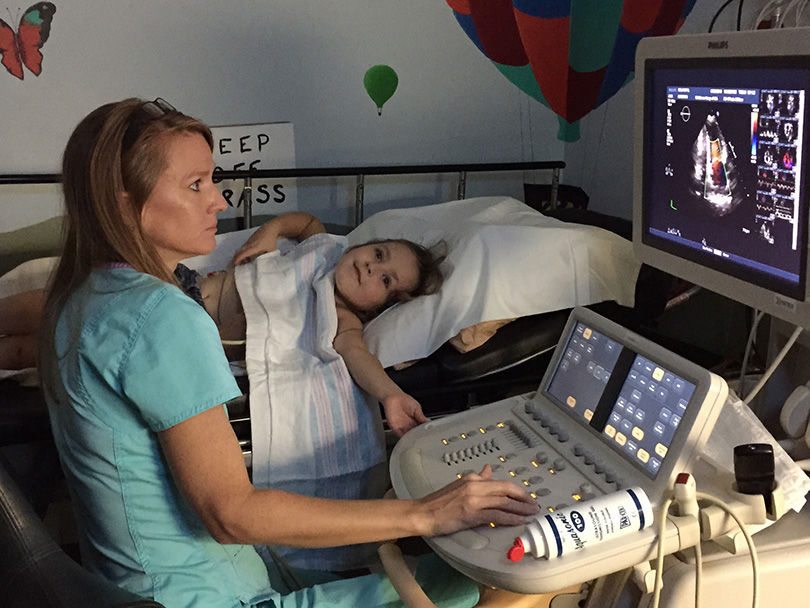 “She’s ready for her ‘jelly belly,’” her mom Hayley Belk said. “That’s how she describes it. She actually gets excited about going.”

Opal’s “jelly belly” comes from having gel applied to her chest and tummy for her routine echocardiogram, a noninvasive ultrasound that produces images of her heart. The Children’s Hospital of Georgia was recently reaccredited for another three years by the Intersocietal Accreditation Commission for high-quality performance in pediatric echocardiography.

“Echocardiography is an indispensable and powerful tool for evaluating a child’s heart,” said Dr. Henry Wiles, one of four pediatric cardiologists at Children’s Hospital of Georgia. “It not only gives a detailed picture of the heart’s anatomy, but also provides information on the function and strength of the heart, as well as the severity of blockages and holes in the heart.”

Opal is one of about 40,000 babies born in the U.S. each year with some form of congenital heart defect, which can range from holes between chambers to very severe malformations, according to the American Heart Association. Congenital heart defects are often diagnosed in infancy, or even before birth. But some are harder to detect than others and may not be diagnosed until later in childhood or even adulthood.

“Early recognition and repair of these defects not only saves lives, but allows us to repair the heart for a healthy and long life in children,” Wiles said.

Opal was just a few hours old in November 2010 when her medical team in Burke County determined that she was in immediate danger. She was quickly transferred to the Children’s Hospital of Georgia, where a pediatric cardiac sonographer performed an echocardiogram to check her heart.

Opal was diagnosed with pulmonary atresia, a condition in which the blood doesn’t properly flow from the right ventricle into the pulmonary artery and on to the lungs. She was essentially missing a pulmonary valve, and her body was being depleted of oxygen. To correct the problem, a pediatric cardiothoracic surgeon had to cut open her chest and insert a shunt into her heart.

Since then, the little girl from the community of Alexander, Ga., near Waynesboro, has had two additional open-heart surgeries and a cardiac catheterization procedure to close an atrial septal defect. But you wouldn’t know it, as Opal has more energy than her two sisters most of the time, according to her father, Rodney.

“She is very active. The only time I notice her getting really tired is at bedtime – when she’s ready to go to sleep, she’s out fast,” he said as he watched the monitor record her heartbeats.

CHOG’s cardiac sonographers perform about 3,000 echocardiograms each year, including 300 fetal echocardiograms, where the heart is studied while the baby is still in the womb. CHOG is the only hospital outside the Atlanta area that is accredited to perform all three methods of echocardiography, including fetal, pediatric transthoracic and transesophageal.

The transthoracic echocardiogram, the most common type, views the heart by moving a transducer to different locations on the chest or abdominal wall. During a transesophageal echo, a probe is passed down the esophagus, which often produces the clearest pictures of the heart, because the sound waves of the probe are not blocked by the lungs and bones of the chest wall.

CHOG has maintained IAC accreditation for more than 16 years – a seal of approval for patients that a facility has been carefully critiqued on all aspects of its operations considered relevant by echocardiography experts. For a list of accredited health care facilities, visit intersocietal.org.

The 154-bed CHOG is the second-largest children’s hospital in the state, providing the highest level of pediatric critical care and neonatal intensive care, as well as a wide range of general and complex health care for children. CHOG was recently ranked the nation’s top performing hospital in pediatric quality and safety by Vizient, Inc., a consortium of the country’s academic medical centers. Visit facebook.com/GAChildrens or follow on Twitter at twitter.com/GAChildrens. 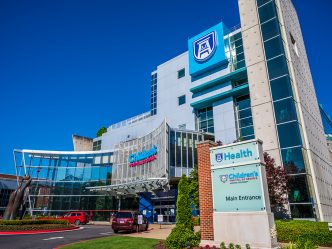 Written by Denise Parrish
Medical Center employees: Get a head start on retirement
FacebookTwitterPinterestWhatsApp
Reeves named to board of directors for AAFP