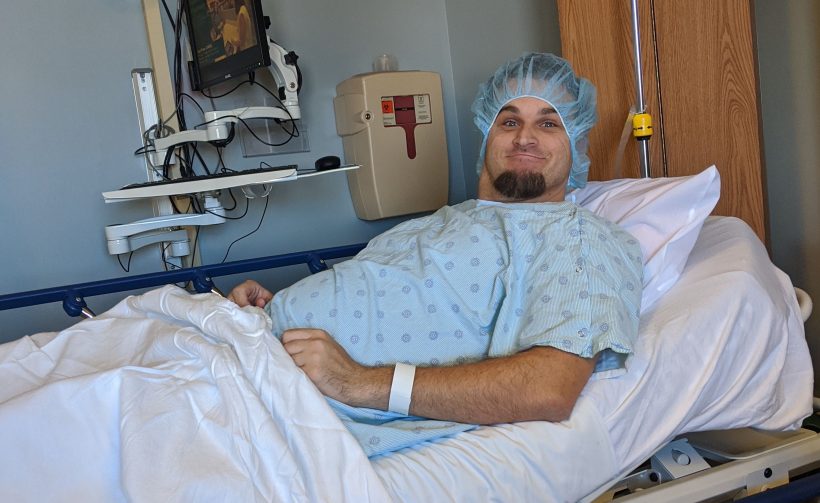 Vance Courtney noticed earlier this year that he had a sharp pain in his shoulder. Picking up the lightest bag of groceries would cause him immense pain.

Originally, Courtney was told there was nothing that could be done for it. However, it had been misdiagnosed, as he learned upon meeting with Orthopedic Surgery Shoulder Specialist Dr. Stephen Parada at Augusta University Health.

“He was able to see that the muscle had been ripped off and was just hanging there,” Courtney explained. “He said it was a rare situation and most people miss it. But he found it and diagnosed it.”

In March, Parada performed a rare surgery on Courtney, who does IT work in Grovetown, Georgia, and he was out of the hospital and home that same day.

Courtney’s malady was so rare that many orthopedic surgeons might go their whole career without seeing a patient with it. The ligaments that hold the ball of the shoulder had torn off the ball side instead of the socket side which is much more common. Without the correct type of the MRI, the injury usually goes unnoticed because it is so rare. The surgery to fix the torn ligaments involves going through small poke holes around the shoulder and putting the camera inside the shoulder joint and then repairing the ligaments back to the ball side of the ball-and-socket.

“He explained everything for me, all the possible negatives that could happen,” Courtney said. “When I started having issues with the healing process, he got me some things to work on, and I got back to the normal healing schedule.”

Courtney has seen enormous progress since the operation.

“I’m already jet-skiing and getting back to an active lifestyle. I’m looking forward to white water rafting and other activities where I can use my shoulder.”

Sgt. Andrew Morris, a soldier based at Fort Stewart, Georgia, ran into another rare, complicated issue.

“When I first got to Fort Stewart, I already had recurring shoulder dislocation,” Morris said. The issue came from falling off a tower at Fort Campbell in Kentucky.

The surgeon there performed an operation early on in Morris’ time on base but was unsuccessful. However, the surgeon’s mentor was Parada, and it was recommended Morris see him.

“He had a problem that a lot of our soldiers in the Army have which is their shoulder dislocates,” Parada said. “Sometimes it dislocates so much that it actually wears away the bone at the front of the socket.

“The surgery we do to take care of that is a really cool surgery that one of my buddies who was also a military orthopedic surgeon in the Navy invented, and he and I have done a lot of research on perfecting this surgery,” Parada said. “It’s not a very common surgery right now and part of that is because it’s a very challenging surgery. Patients come from all over to have this surgery. It isn’t done routinely in a lot of places.”

Parada performed the surgery on Morris which involved taking a piece of an ankle bone and cartilage from a donor cadaver and using it to rebuild the front of a socket where the missing bone is.

“He explained to me that [the operation] was a relatively new procedure but they had a good overall success rate,” Morris said.

Now over six months later, Morris, like Courtney, is back to physical activity: “I won’t be back to 100 percent but I’ll be pretty danged close to it.”