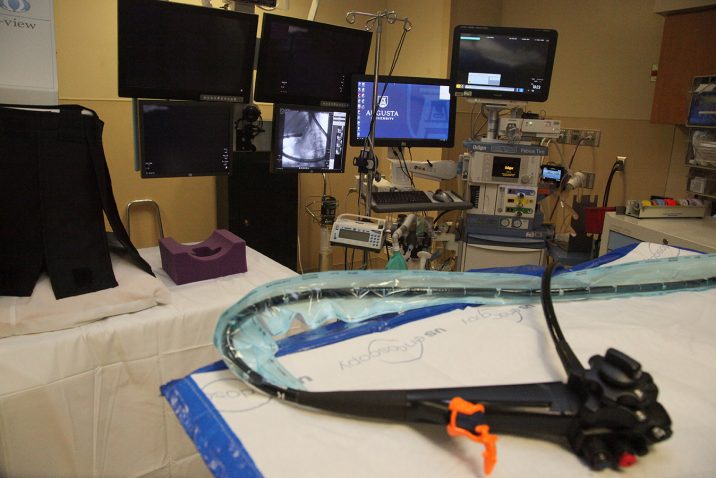 Let’s be honest, most everybody shares the same reaction to learning they have to undergo a colonoscopy. However, Kenneth J. Vega, MD, has made it his mission to turn anxiety, fear, and stress about the procedure into peace, calmness, and relaxation about the experience.

“Yes, preparing for a colonoscopy can be a complicated process for some,” said Dr. Vega, chief of Gastroenterology and co-director of the Digestive Health Center at Augusta University Health. “But, there are strategies I share with all my patients that can make it a much better experience.”

You may not know, but March is Colorectal Cancer Awareness Month. According to the American Cancer Society, colorectal cancer is the third most common cancer diagnosed in the United States for both men and women. Research shows it is the second most common cause of cancer death for men and women. However, did you know that undergoing a colonoscopy allows doctors to detect changes in the colon before a person can develop cancer?

“As we are moving through a patient’s colon, we are looking for polyps,” Vega said. “These are bumps, some large, some small, we find inside the colon. If not removed, they can transition into colorectal cancer.”

National guidelines are currently changing based on recent information showing increased colon cancer in patients under 50 years old. The American Cancer Society now recommends screening to start at age 45 for everyone. Also, the United States Preventative Services Task Force (USPSTF) is revising its recommendation currently. A USPSTF draft statement now recommends screening to start in all at age 45. A test should then be repeated every 10 years if there is no family history of colon cancer or polyps. However, if you have a family history of either colon cancer or polyps then the test should occur every five years. According to the American Cancer Society, colonoscopies are one reason the number of men and women dying from colorectal cancer has decreased for the last several decades. For those who had colorectal cancer at the time of their colonoscopy, the procedure allows doctors to find cancer at earlier stages, increasing a patient’s chance of living a longer, healthier life.

“As a gastroenterologist, I’ve been performing colonoscopies for over 25 years,” Vega said. “Also, I have undergone the procedure myself three times now. Having that personal experience allows me to give my patients insight into what to expect from preparing for the procedure to the recovery after they arrive home.”

Vega said his first tactic for a better colonoscopy experience begins with the laxative formula patients must drink to clean out their colon. According to him, this has also changed with a new, better-tolerated preparation compared to the gallon of laxative used previously. The new preparation consists of Miralax powder mixed with 64 oz. of Gatorade. Start drinking the new preparation around 4 p.m. the day before their procedure. You will drink it every 20 minutes. Starting the process at 4 p.m. will mean you will finish between 9 p.m. and 10 p.m. that evening.

“Following this schedule means you should be finished emptying your colon no later than midnight,” Vega said. “This will allow patients to get a good night’s sleep for their procedure the following morning. A colonoscopy is a much more enjoyable experience if you are rested.”

The procedure itself can take between 30 minutes to an hour. After the patient is sedated, a doctor begins by inserting the scope into the rectum, moving it through the four sections of the colon until it reaches the cecum, which connects to the end of the small intestine. Once it reaches this area, the doctor begins removing the scope while looking for and removing any polyps.

“Drinking the laxative formula and having a clean colon allows me to not miss any polyps during the procedure,” Vega said.

To show how important having a colonoscopy can be for preventing colorectal cancer, Vega shared a story of a patient who kept putting off the procedure.

“I did that person’s procedure in 2002 when the patient was 56-years-old,” he said. “In all, I found 30 polyps during my examination of the colon. Four of those were large and aggressive enough to be transitioning into cancer.”

Vega said he talked with the patient about having surgery to remove the section of the colon where those aggressive polyps were found.
“Now, he sends me birthday and holiday greetings all these years later,” Vega said. “There’s nothing better than taking out something you know would have turned into something bad. Knowing you came at the right time and for me to be able to help you in the best possible way is very satisfying.”