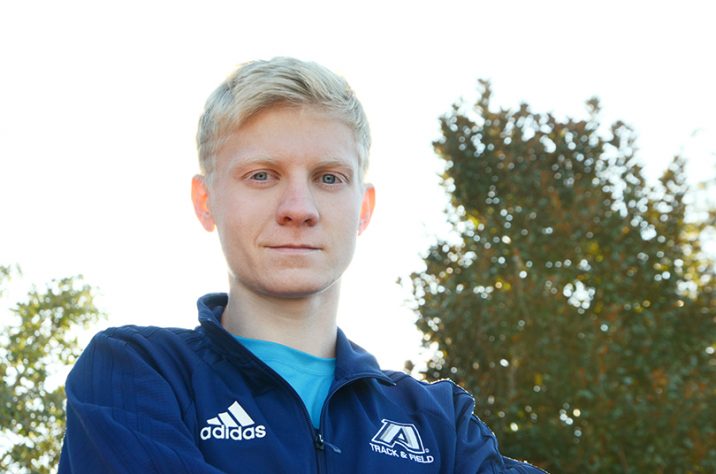 For the second year in a row and only the third time in the program’s history, the Augusta University men’s cross country team will race against 33 other squads at the NCAA Division II National Championships in Slippery Rock, Pennsylvania, on Saturday.

In 2017, they finished 23rd, a result that disappointed the team.

“We went pretty well out there, but they didn’t run their best race,” said Head Coach Adam Ward. “I think they really regret it not being as maybe mentally and physically in tune as they probably could’ve been.”

This year is different.

With one senior, three sophomores and nine freshmen, the Jaguars are one of the youngest teams to compete at the Nationals in Pennsylvania. Although younger than last year’s team, the Jaguars are mentally stronger to take on the big stage this year — something they will definitely need in order to face the Slippery Rock course and the weather conditions.

At the NCAA Southeast Regional, a qualifying for Nationals that took place at the University of North Georgia earlier in November, the Jaguars ran a tough, but relatively flat and fast 10K course.

“It was muddy, cold. Besides that, the competition was fierce, too, but we persevered and ran really good through,” said Kimball, who placed sixth and was the first Jaguar to cross the finish line.

Augusta placed third of 21 teams and qualified for Nationals with 98 points, only behind the University of Mount Olive with 73 points and Queens University with 32.

The Slippery Rock course could turn out to be tougher than that of North Georgia. The hills will test the runners’ physical and mental strength. A bigger challenge perhaps will be the weather. The Jaguars will have to run in 45-degree weather, most likely in the rain and with 12-mile-per-hour winds. For teams from up north, that condition may not be a problem. For most Southern teams, however, it will probably be.

Not for the Jaguars.

“Everybody has to deal with the same stuff,” Ward said. “If we can just be a little more mentally tough than some of the other teams, then we will be fine.”

And the team has done a lot of mental preparation for this race, running three days a week at 6:30 a.m. in cold, sometimes freezing weather. And Ward makes sure his runners don’t fully cover up for morning practice. He wants them to feel the cold and adapt to it. The team understands the importance of this mental training.

“A tiny percent of it is fitness, and the rest is just the mental preparation that it takes to be able to perform the best you can,” said senior Noah Hulett, who placed seventh at the Regionals this year, finishing only three seconds behind Kimball. “I sincerely think we are tougher than a lot of the other guys out there.”

Part of the mental preparation also comes from having experienced the big stage in 2017. Hulett, who ran at the Nationals last year, looks at the Slippery Rock course as a way to seek redemption.

“Last year, we didn’t race our strongest, but it was our first year on the big stage,” Hulett said. “We just didn’t have that feeling that we belonged. Now, we are going into the race knowing we belong there.”

This feeling of belonging is exactly what Ward wants to instill in his young team.

“This is what we prepared for and trained for all season long,” said Ward, who was voted the best coach of the Southeast Region in 2018 for the first time in his 15 seasons at Augusta University.

He wants his runners to trust they can go back to the Nationals every year and improve their results each time. In 2013, the first time Ward took his men’s squad to the Nationals, the Jaguars finished 31st. In 2017, they placed 23rd.

Ultimately, the goal is a national title.

But to get there, the Jaguars need to be mentally tough and believe they can achieve that goal.

Written by Arthur Takahashi
Noon Arts concerts return to the Lee on Dec. 6
FacebookTwitterPinterestWhatsApp
Coffee with a Cop is heading to Health Sciences Campus