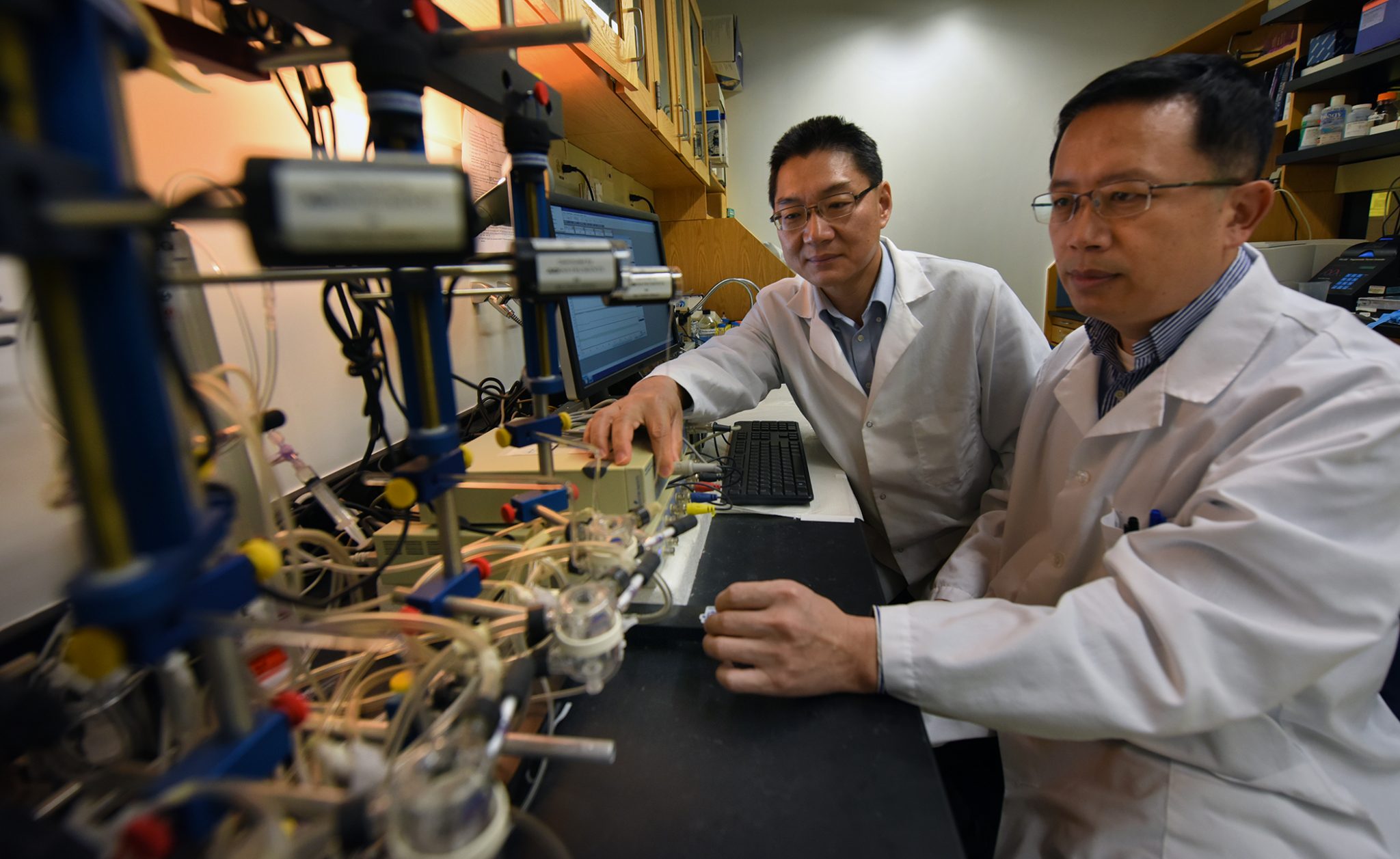 AUGUSTA, Ga. –  A new and early target for treating pulmonary hypertension appears to be an enzyme that’s normally key to energy production but destructive in the face of this high blood pressure inside your lungs.

It’s called PFKFB3, an enzyme that helps us use glucose as an energy source. But when smoking, air pollution, congenital heart defects and other factors start driving pressure inside the lungs up and oxygen levels down, called hypoxia, PFKFB3 levels soar and so does the damage that narrows the passageway inside the blood vessels in our lungs.

“Hypoxia is a major cause of a lot of pulmonary disease,” says Dr. Yunchao Su, pharmacologist in the Department of Pharmacology and Toxicology at the Medical College of Georgia. In the short term, hypoxia constricts the pulmonary muscles that enable us to inhale and exhale, Su says. In the long term, it thickens the blood vessel wall, narrowing the passage for blood. In the early term, it also increases levels of PFKFB3, particularly in the pulmonary artery that takes oxygen-poor blood from the body back to the lungs for an oxygen refill.

“In response to hypoxia, we should grow more blood vessels but we cannot,” says Dr. Yuqing Huo, director of the Vascular Inflammation Program at MCG’s Vascular Biology Center.

Instead hypoxia increases PFKFB3, possibly to increase energy levels for the work at hand, but instead it contributes to a state that leaves patients short of breath, dizzy, with swollen legs and abdomens, a racing pulse and potentially deadly heart failure.

“If you look at the X-ray or other lung image of a patient with pulmonary hypertension, you will see the vascular system is really, really reduced,” Huo says.

Su and Huo are co-principal investigators on a new $2.2 million grant from the National Heart, Lung and Blood Institute that is helping them further explore how that damage gets done and what happens when they reduce PFKFB3 levels.

They already have documented high levels of the enzyme in smooth muscle and endothelial cells in both humans with pulmonary hypertension and in the lungs of animal models.

They have also seen that when they cut PFKFB3 levels essentially in half, it appears to protect mice from pulmonary hypertension, including significantly decreasing harmful inflammation and proliferation of the blood vessels in the lungs. It also reduces levels of platelet-derived growth factor, which regulates cell growth and division, and vascular endothelial growth factor, which should have helped make more blood vessels. It even helps smooth muscle and endothelial cells resume their natural ability to die when something is amiss with them.

All this downstream curtailment that results from reducing PFKFB3 levels is why the scientists are theorizing that the enzyme has an early and key role in pulmonary hypertension, a status that makes the enzyme a logical treatment target, they say.

The new grant is helping Su and Huo further explore the role of the enzyme by using a PFKFB3 inhibitor to block it, and by studying mice with the enzyme knocked out of the vascular network in the lungs. They are looking at whether one way PFKFB3 does its damage in endothelial cells is by activating the gene NLRP3, known to promote inflammation and growth factors.

They are exploring how lactate, or lactic acid, – the same stuff that makes your muscles sore when you exercise, is a byproduct of energy production and is increased by high PFKFB3 – elevates calpain. That’s a protein Su studies that is activated by growth factors released by lung tissue chronically stressed from exposure to irritants/toxins like cigarette smoke and air pollution, which worsens inflammation and the destructive vascular remodeling.

They also are looking further at whether mice with PFKFB3 deficiency in smooth muscle and endothelial cells will experience less vascular remodeling.

Current treatments for pulmonary hypertension include many of the same used for heart conditions such as digoxin to help the heart pump, diuretics to reduce fluid volume and oxygen along with drugs to help keep blood vessels from narrowing and help produce more vasodilators, according to the Pulmonary Hypertension Association. Lung or heart-lung transplants are another option when other treatments fail. The condition often occurs in concert with others, and can start with other types of heart or lung disease, according to the Centers for Disease Control and Prevention. Sometimes there is no clear cause. It can occur at any age, including in newborns, although risk increases with age. It’s more common in women and blacks.

Most cells in our body use an efficient process called cell respiration, in which oxygen is used to generate ATP, the body’s primary energy fuel. Also efficiently, mitochondria, powerhouses in the body, both use and make ATP. But vascular cells – and tumors alike – instead take the less efficient route of using glucose to make energy. Much of the research on PFKFB3 has been in cancer.