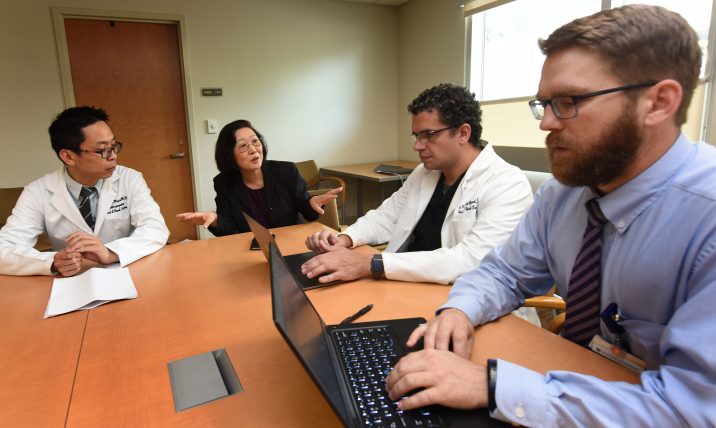 A checkpoint may delay travelers but it can help give cancer free rein by suppressing the natural immune response that should destroy it, researchers say.

Now they want to learn more about how the enzyme CD73 — an abundant checkpoint in our body that helps keep our immune system from getting out of control — is helping often-aggressive head and neck cancers thrive.

CD73 is found in all cells and in abundance in the supportive microenvironment of head and neck cancers. High levels already are associated with poor prognosis in the most common type of these cancers.

Immunologist Dr. Yan Cui and colleagues otolaryngologists Drs. Michael Groves and J. Kenneth Byrd want to know more about where high levels originate with the long-term goal of blocking them.

One way CD73 appears to support cancer is by converting the cell fuel ATP, or adenosine triphosphate, which typically works to activate the immune response, back to adenosine, a natural compound that inhibits it, says Cui, a member of the Cancer Immunology, Inflammation and Tolerance Research Program at the Georgia Cancer Center and professor in the Department of Biochemistry and Molecular Biology at the Medical College of Georgia at Augusta University.

Cui is principal investigator on a $420,000, two-year Exploratory/Developmental Research Grant from the National Institute of Dental and Craniofacial Research that is providing more insight into how CD73 supports cancer.

Most of the help seems to come from the environment the tumor has built to support itself, called the tumor microenvironment.  Cui has shown that in the microenvironment, stromal cells like fibroblasts, express high levels of CD73, which helps create a perfect storm that ultimately helps cancer cells survive. These cancer-associated fibroblasts seem to be particularly adept at making CD73 and Cui has found high levels of fibroblasts can mean low levels of T cells, key drivers of the immune response. In fact, Cui has seen in some head and neck cancers a large number of immune cells clearly present and clearly not functioning. “They are there, but they are tolerant,” Cui says, while in other tumors, immune cells are just MIA.

“CD73 very rapidly gets rid of the ATP and changes it to the immunosuppressive adenosine,” says Cui of the powerful immune checkpoint. “Adenosine, in turn, can inhibit T cell function; in very high concentrations it can even kill the T cells,” she says.

Cui and physicians in the MCG Department of Otolaryngology who treat these patients, hope their studies of fresh surgical specimens will turn around that scenario so that CD73 production by stromal cells is reduced and T cells can regain their focus.

“If we better understand the process, we can design how to target those processes, interrupt those interactions to reverse suppression and enhance immune activity,” Cui says.

Their focus, squamous cell cancers, comprise about 90% of head and neck cancers and occur on the mucosal surfaces inside our head and neck, like the lining of the mouth, nose and throat, according to the National Cancer Institute. They are generally categorized by where they start, like in the oral cavity, which includes the lip, tongue, gums and pretty much most of what we can see when we open our mouths wide.

The often-aggressive cancers affect about 60,000 people annually with human papillomavirus, the most common sexually transmitted infection in the nation, having now surpassed smoking and drinking as a cause of these cancers today.

The cancers are particularly tough to treat when they have spread locally or regionally, Cui says, with survival rates of less than 50%. Metastasis, to even a single lymph node, moves the cancer from early to advanced stage and can cut your survival rate in half, says Groves, MCG otolaryngologist and a coinvestigator on the new study.

People may come to see Groves after a few weeks of hoarseness and he discovers one small, comparatively treatable tumor on the vocal cords. Patients also come with a massive neck tumor and trouble breathing by the time they get to the emergency room. “This is a very heterogeneous group,” Groves notes.

To get a better idea of what different cell populations are doing, they are looking at the interaction and distribution of stromal cells and immune cells in recently removed human cancer specimens. They are measuring CD73 expression by the different stromal cell types and looking at how CD73 is modifying the immune response, in this case to benefit the tumor. They are looking at the function and gene expression of individual cells.

“It’s important to know these types of interactions so you can identify targets,” Groves says.

“Everything in our body is a balance,” Cui notes, and indefinitely blocking CD73 could definitely have bad consequences like enabling autoimmune disease by enabling the immune system, rather than the cancer, to go unchecked. But the researchers think temporarily blocking CD73 may help improve treatment response and survival for some of these patients and the current study should provide more evidence of whether that’s true.

There already are some small molecules that can suppress CD73 function used in the lab by researchers like Cui, and some of the inhibitors are being used in early phase clinical trials for other tumor types, she says, but results are not yet known.

Checkpoint inhibitors are an emerging type of immunotherapy that block proteins that can block the immune response to cancer. More established targets include proteins like PD-1 and CTLA-4, which can be produced by both immune cells and cancer cells. Like CD73, some cancer cells have a lot these proteins. But so far at least, existing checkpoint inhibitors have not been very successful in treating head and neck cancers specifically, the researchers say, and generally speaking are used for palliative care when a cancer returns after more standard therapies, says Groves.

Standard treatment for head and neck cancer can include surgery, chemotherapy and radiation, and can mean patients lose their ability to chew, swallow or speak, says Dr. Calvin Myint, fourth-year resident in the MCG Department of Otolaryngology and a member of the research team.

Acknowledging the genetic heterogeneity of even the same tumor type in the same location and stage in two different people, the researchers hope another thing these and other studies will do is enable physicians to determine as early as possible the aggressiveness of a patient’s tumor. That can help steer physicians away from more aggressive therapies — and their more aggressive side effects — when possible, Myint says.

“You have to figure out what is best for that patient at the moment in time they present,” Groves says. For example, there is now evidence that a combination of chemotherapy and radiation therapy, versus surgery as well, is best for tonsil cancer that has spread to the lymph nodes because the destruction of tissue from surgery can be extensive and survival with chemotherapy and radiation is just as good, Groves says.

Higher CD73 levels also have been associated with shorter survival from breast cancer and with more aggressive, migrating breast cancer cells. In a bit of a vicious cycle, tumor cells seems to be very good at producing CD73 and hypoxia, or low oxygen levels, and cell death that happen with cancer can produce more.

The tumor microenvironment is basically the body resources like normal cells, including immune cells, blood vessels and molecules in the vicinity, cancer coops to support itself.

It was previously thought that stromal cells inside the microenvironment just provided literal support to a tumor. “Now we understand they have much more function than just holding the tumor together. They have an immune regulatory function,” Cui says.

Groves expects to see head and neck cancer rates continue to increase along with HPV infection rates until HPV vaccines begin to significantly impact spread of the virus.

He always tells patients there are certain things that can’t be controlled like the genetic makeup of the tumor, the response of the tumor and the patient’s body to treatment and how advanced the disease was when the patient presented. Factors they can control include not delaying surgery or missing treatment appointments, and taking overall care of themselves like eating well, drinking plenty of water and getting plenty of rest. Groves is hoping the work of Cui and other basic scientists will help move some of the uncontrollable factors into the controllable category.