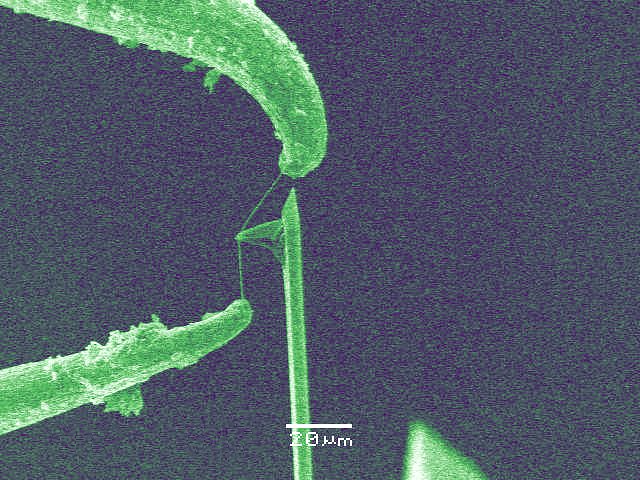 Right now, you may know someone living with pancreatic cancer. Due to the nature of the tumor, there may be no chance of removing it surgically. But one option that could make a big difference is the NanoKnife system. It uses the power of electricity to destroy the tumor, leaving vital blood vessels in tact that could be damaged during surgery.

“The key is using electricity and something called irreversible electroporation,” said Dr. Jim Kruse, director of surgical oncology at the Medical College of Georgia.

Electroporation involves electricity and pores. Kruse and his team use the NanoKnife system to shock the cells inside a person’s tumor. The electric current causes pores inside those tumor cells to open and stay open. Keeping those pores open causes the cells to die out over time, killing a person’s tumor.

“If you use too much electrical current on a tumor wrapped around a person’s pancreas, you can burn holes in nearby body parts such as the intestine,” Kruse said. “If you use too little, the pores close and the tumor keeps growing. So you really have to find that sweet spot for how much current is enough.”

Kruse said he and his team at the Georgia Cancer Center have used the technique for patients with multiple GI cancers, including pancreas, liver and rectal cancers as well as a rarer group of cancers called sarcomas. While the long term effects of this system are not fully known, there are a growing number of studies showing that it may provide better cancer control in specific circumstances when the tumor is localized to a region.

Kruse and the team are currently participating in a national study looking specifically at pancreas cancer and are developing local studies on its use in other cancers. They hope to make this new technology available to patients previously considered inoperable.

The NanoKnife system gave Valerie Austin a longer life. She was diagnosed with pancreatic cancer in March 2014. At first, Kruse wanted to remove the head of her pancreas, leaving the body and the tail. But, during the surgery Kruse discovered Austin’s tumor was wrapped tightly around critical blood vessels.

Kruse said 75% of the patients with a pancreas cancer similar to Austin’s are not able to have surgery. But the NanoKnife system offers a second option, because electricity is focused on the tumor itself. Doing so leaves the blood vessels intact and flowing like normal.

“It can increase a person’s average life expectancy from about 1 year to around 2 and a half years, in carefully selected patients with tumors that haven’t spread yet” he said.

While Austin’s tumor has returned and she’s going through 25 rounds of radiation, she is happy with the work Kruse and the Georgia Cancer Center staff have done to help her survive for four years since being diagnosed.

“This center is awesome. Dr. Kruse, Kim Luckey, nurse navigator for the gastrointestinal cancer team, and the rest of the staff have been supportive since the beginning,” she said. “They really care about their patients.”

Written by Chris Curry
Caught in the Act of Good Teaching Award celebrates inspiring teachers
FacebookTwitterPinterestWhatsApp
Click the link, fill out the form and let everyone know how you’re bringing your A Game