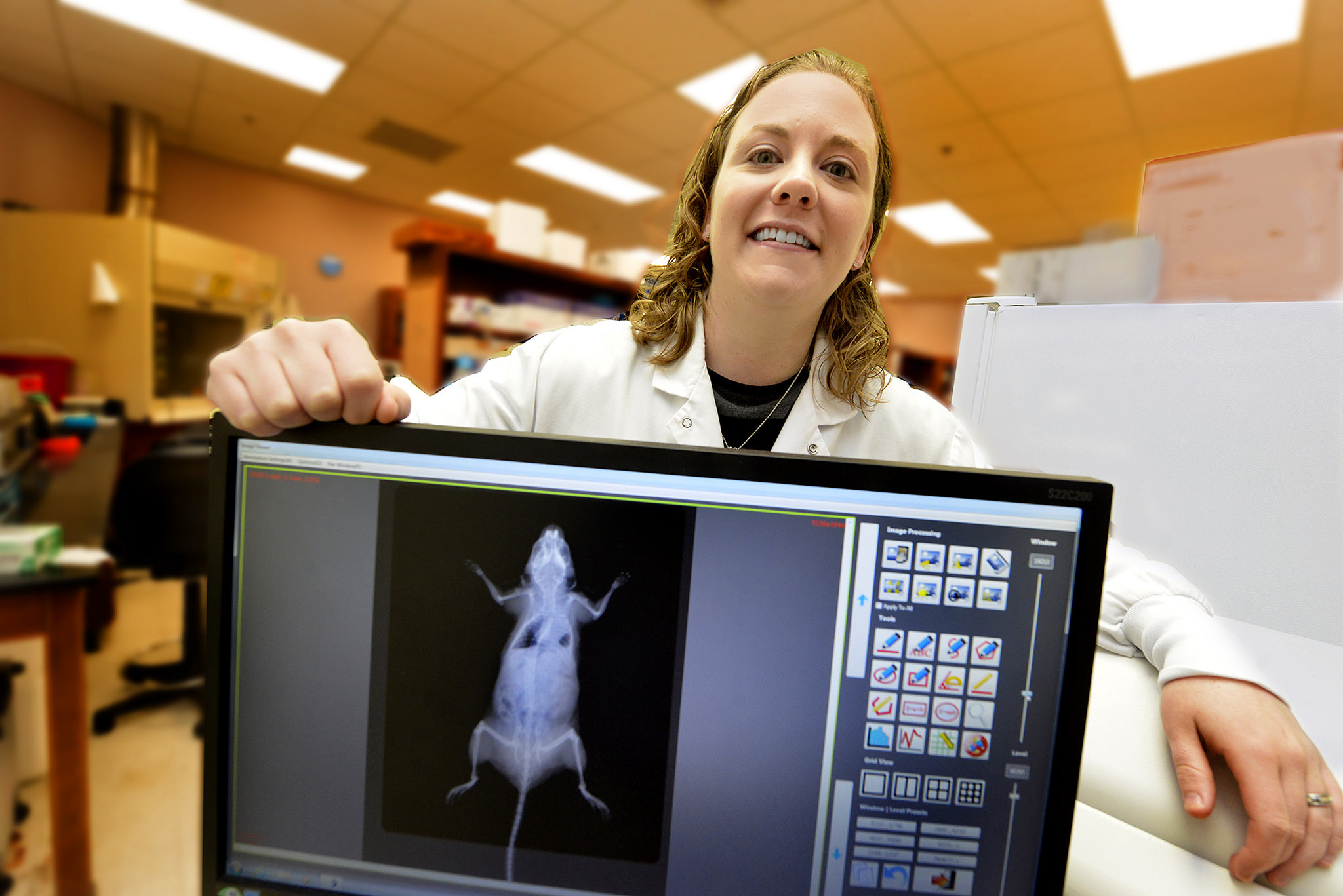 One mouse with weak bones appears to have a strong metabolism, even on a high-fat diet, scientists report.

While weaker bones are clearly not a good thing, scientists suspect that, somewhere in the conversation between the genetically engineered mouse’s skeleton and the rest of its body, there may be an answer that helps obese individuals avoid some of the worst ravages of this health epidemic.

“But within the last 10 years or so, people have really started to understand that there is more to the skeleton than that and, in fact, it has a really important endocrine role in the body as well,” said McGee-Lawrence, biomedical engineer in the Department of Cellular Biology and Anatomy at the Medical College of Georgia at Georgia Regents University.

She calls bone’s metabolic impact a “new frontier” and its exploration important for getting a total picture of what bone does. Mounting evidence of its function as an endocrine organ also may point toward new ways to intervene in obesity-related type 2 diabetes.

“If we can understand, not only the role of fat and the pancreas, but the role the skeleton plays in this process, we can come up with new avenues for treatment,” said McGee-Lawrence, a corresponding author of the study in the journal Molecular and Cellular Endocrinology.

McGee-Lawrence’s bone studies had her looking at the molecule Hdac3, an important regulator of gene expression found throughout the body that can turn gene expression up or down. When her research team deleted Hdac3 specifically from the skeleton, they were not surprised to find the mice had weaker bones, but they were surprised to find the mice had major metabolic adjustments.

“We were not really sure what to make of the phenotype when we first saw it,” she said. The mice got more interesting as they looked further and found that although the knockout mice ate a normal amount of food compared to controls, they had less body fat and a low fasting-glucose level, an indicator that their body is using glucose, its key energy source, efficiently. The mice also are efficient users of insulin, a hormone produced by the pancreas that is essential to cells using glucose as energy.

One of the first signs of type 2 diabetes in mice and humans is reduced insulin sensitivity in the liver and their Hdac3 knockout’s liver was very sensitive to insulin.

They started with a logical suspect, osteocalcin, which is made by bone-making osteoblasts and is the most recognized bone-derived molecule known to affect insulin secretion and sensitivity. Their mice surprised them again because osteocalcin levels actually trended low in the Hdac3 knockout.

So they looked to the liver, which has a major role in digestion, managing metabolism, and storing energy reserves. “The knockout mice are making something that is good for their metabolic rate,” McGee-Lawrence said. “What’s coming from the bone and talking to these other organs?  If we can figure out what that molecule is, then that is your starting point for coming up with a new therapy,” McGee-Lawrence said.

They suspect part of the magic may be a molecule that helps the liver maintain healthy insulin sensitivity, and that molecule could be osteoprotegerin, or OPG. OPG is also made by osteoblasts to help decrease the amount of bone broken down in the skeleton. “It’s a good molecule,” she says, whose function in the skeleton is mimicked by the drug denosumab, one of the newer generation osteoporosis drugs.

The Hdac3 knockout mice have high levels of OPG, another surprise the mice provided scientists. Others have shown that, in addition to its role in the skeleton, OPG can travel in the blood to the liver where it reduces inflammation, and that reduced liver inflammation means improved insulin sensitivity, which made OPG a good suspect.

“Is this OPG molecule our missing piece of the puzzle to explain why the Hdac3 knockout with weak bones has a great metabolism?” she said of their ongoing studies. If the answer turns out to be “yes,” that could mean an existing drug has a new usage in directly addressing obesity’s high profile role as a leading cause of preventable diseases, including type 2 diabetes and the cardiovascular and other problems that typically follow.

McGee-Lawrence notes the irony that her knockout mice have weaker bones but higher levels of a molecule that aids bone strength. But these mice don’t have weaker bone because of higher resorption, which OPG addresses, rather they are not building enough bone, the other side of the healthy bone equation, she said.

The jury is still out on whether denosumab could affect metabolism; nothing has jumped out from retrospective analyses of osteoporosis patients taking the drug, but this question would have to be addressed in a specific patient population, such as individuals with pre-diabetes, McGee-Lawrence said.

The research was supported by the National Institutes of Health, The Minnesota Obesity Center, and the Mayo Clinic Center for Regenerative Medicine. Collaborators include Drs. Thomas A. White, Nathan K. LeBrasseur, and Jennifer J. Westendorf at the Mayo Clinic. McGee-Lawrence came to MCG from the Mayo Clinic in August 2014.