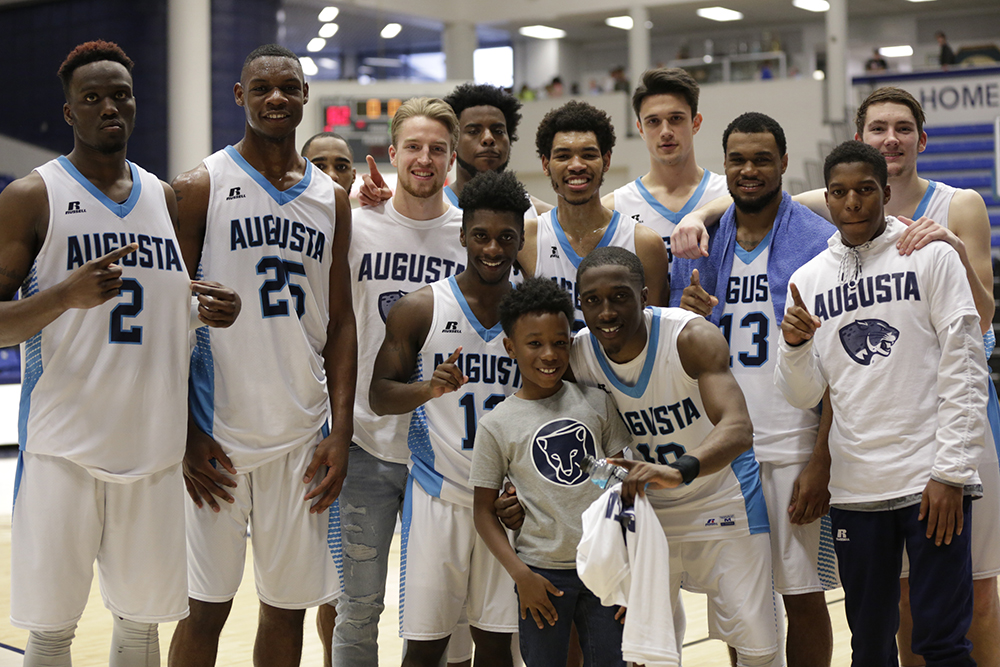 The Augusta University men’s basketball team hosted the 2017 Homecoming Celebration and Senior Day on Saturday afternoon in Christenberry Fieldhouse and won an 82-66 Peach Belt Conference game over the Lander Bearcats.

AU Athletics honored the 2017 seniors from cheerleading, pep band, and the basketball teams. Men’s hoops celebrated the historic career of senior guard Keshun Sherrill prior to the game!

Augusta moved to 21-6 overall and 13-5 in the Peach Belt and Lander went to 10-16 and 7-10 in the league. In his final regular-season game in the Berry’, Sherrill shined with 29 points, three steals, three assists, and two rebounds. Junior Tamryrik Fields added 12 points and sophomore Aaron Boyd 10 points in the victory.

The Jags forced Lander into 12 turnovers and only committed eight, while they outrebounded the Bearcats 29-25. Augusta shot 53.7 percent from the floor (29-of-54) and went 16-for-18 (88.9 percent) at the charity stripe. They dropped 41 points on Lander in each half.

Lander also shot over 50 percent with a 52 percent mark and they went 10-14 (71.4 percent) at the free-throw line. Augusta made eight three pointers to Landers four. The Bearcats had four in double figures with TJ Knight leading the way with 12 points.

Sherrill buried a three pointer to ignite the crowd and take the first lead. He responded for another trey three minutes later as Augusta held the advantage. Lander hung around and stole a 16-13 lead on back-to-back layups with 11:30 on the clock, but the Jags rallied to take the lead and never trailed the rest of the way.