Lu named chair of Department of Neuroscience and Regenerative Medicine 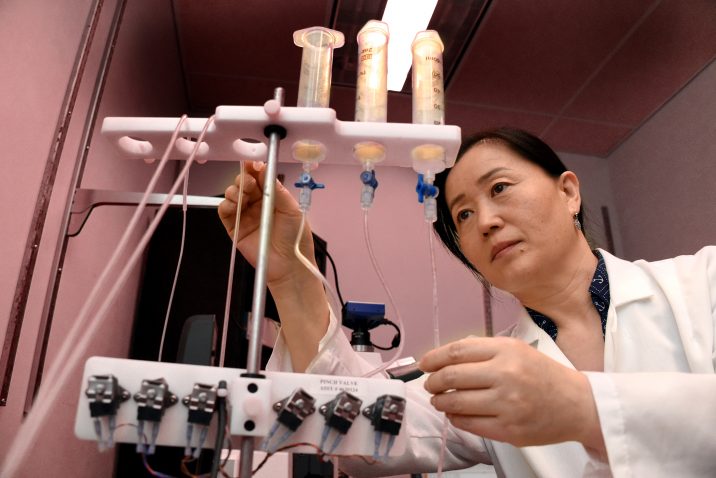 Dr. Xin-Yun Lu, pharmacologist, molecular behavioral neuroscientist and Georgia Research Alliance Eminent Scholar in Translational Neuroscience at the Medical College of Georgia at Augusta University, has been named chair of the MCG Department of Neuroscience and Regenerative Medicine.

Lu, who studies novel therapies for depression and PTSD and is pursuing innovative ways to understand the development and progression of Alzheimer’s, will begin her new job July 1.

”We aggressively recruited Dr. Lu to MCG because of her reputation for the relentless pursuit of new and better ways of understanding conditions that are all too common, like depression and PTSD, and identifying potential new treatment targets that could one day better help millions,” says Dr. David Hess, MCG dean. “In her two years with us, she has proven to be that innovative investigator who continues to broaden her scope, most recently to include Alzheimer’s. She has proven as well to be a natural leader and collaborator across other disciplines like vascular biology.”

“Georgia Research Alliance recruits Eminent Scholars into research clusters that span the entire academic research enterprise throughout the state,” says Russell Allen, CEO and president of the GRA, says. “In the two years since her coming to Georgia, Dr. Lu has shown her strong ability to collaborate with her peers in the neuroscience and regenerative medicine space.”

Lu’s research focus includes adiponectin, a signaling hormone made by fat cells and secreted into the bloodstream that helps regulate glucose levels by increasing the breakdown of fatty acids, which reduces insulin resistance. Low adiponectin levels are associated with diabetes, obesity, cardiovascular disease and cancer.

Lu has established connections between low levels of the hormone and depression as well as PTSD, and identified adiponectin as a therapeutic target for both. Additionally, Lu studies the satiety hormone leptin, also secreted by fat cells, that appears to also impact emotion. Her scientific team has evidence in an animal model that chronic stress raises levels of stress hormones and decreases leptin levels. Her research suggests that giving leptin has a similar effect as an antidepressant.

Her recent work has also focused on SIRT1, a gene that is involved in the firing of the brain’s excitatory neurons, which is decreased in depression. Lu’s lab showed that directly activating SIRT1 may help turn around classic symptoms of depression like social isolation and loss of interest, at least for males.

Lu’s work is currently supported by three grants from the National Institutes of Health, including her most recent $3.5 million award to examine whether our aging fat cells are important to the onset and progression of Alzheimer’s. Her lab has evidence that as we age, our fat becomes less efficient at producing adiponectin, which helps support the growth and survival of neurons and helps regulate their activity.

She has been consistently funded by the NIH for more than a decade and is corresponding or first author on nearly 40 peer-reviewed journal articles.  She is a regular member of the NIH Neuroendocrinology, Neuroimmunology, Rhythms and Sleep Study Section and an elected member of the American College of Neuropsychopharmacology.

Lu is guest associate editor of PLOS Genetics, academic editor of PLOS ONE and guest field editor for the International Journal of Neuropsychopharmacology. Lu’s honors include an Independent Investigator Award from the National Alliance for Research on Schizophrenia and Depression. She is an avid educator and mentor for graduate students and postdoctoral fellows.

She earned a medical degree from Binzhou Medical College in China; a doctorate in pharmacology from Washington State University and completed a postdoctoral fellowship at the Mental Health Research Institute of the University of Michigan Medical School in Ann Arbor.