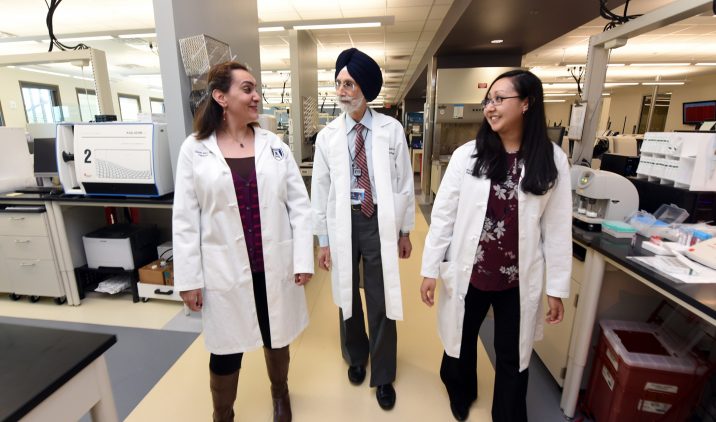 About 10% of patients who come to complex care hospitals may have low levels of folate and other indicators of malnutrition, investigators say.

To ensure those patients are identified and helped, those who present with gastrointestinal problems, chronic kidney disease or sepsis — all associated with malnutrition — need to have their folate levels tested on admission, they report in the journal Laboratory Medicine.

Singh and his colleagues were trying to come up with a recommendation for whose folate levels should be tested because of testing inconsistencies he was finding at AU Medical Center, the Augusta-based adult teaching hospital for MCG, including what happened when a low folate level was found.

Evidence of malnutrition they found in those with low folate levels included 25% with a lower serum albumin, the main protein of the liquid portion of blood that’s made by the liver; 55% with low levels of prealbumin, a short-lived protein made by the liver which decreases in supply when the liver isn’t getting adequate nutrition; and 11% with a deficiency in vitamin B12, which often works synergistically with folate, which is also a B vitamin. More than 62% of those with low serum folate were deficient in one or more of these malnutrition markers, the investigators say.

Their findings led them to suggest that patients with a folate level of less than seven nanograms per milliliter be evaluated for malnutrition. A state of overweight or obesity should not preclude malnutrition evaluation, they say.

The low folate group also had a significantly higher prevalence of gastrointestinal disorders, sepsis and abnormal serum creatinine. Creatinine is a breakdown product of muscle and protein that is typically eliminated by the kidneys, and high blood levels indicate kidney problems.

The investigators found no significant differences in the high and low folate  groups in related factors like diabetes, drug and alcohol abuse or an existing diagnosis of malnutrition.

A complicating factor was that as many as 60% of the patients they reviewed had received a folic acid supplement before they were tested, which meant that low folate levels could be even more prevalent. That finding and other indicators of nutritional deficiency prompted the AU Health System to urge medical staff to do folic acid testing before any supplements or blood products were given, even before patients eat a hospital meal. The health system’s Medical Executive Board also approved automatic testing for prealbumin and B12 in those found to have a folate  level of less than seven nanograms per milliliter.

The investigators note that B12 levels also need to be tested before a folate supplement is given. Folate and B12 have some overlap in function but both are needed, Singh says. “One cannot make up for the other and they often work together to make blood and keep the nervous system in working order,” he says.

Folate, or folic acid, is an essential nutrient, which means our bodies don’t make it, we have to consume it.

The availability of folate in so many foods means many of us likely don’t need testing or a supplement, he says. “The addition of folate to common foods like cereal has helped us compensate to some extent for even an unhealthy diet,” Singh says.

Since 1998, folic acid has been added to bread flour, cornmeal, pasta, rice, breakfast cereal and corn masa flour used to make corn tortillas and tamales, according to the National Institutes of Health Office of Dietary Supplements. Foods like eggs, legumes, asparagus, Brussels sprouts and citrus fruits are some of the healthiest foods that are naturally high in folic acid.

Low folate levels may indicate problems with absorption not just with diet, Singh says. Too little folate can result in the blood disorder megaloblastic anemia, which is characterized by weakness, trouble concentrating and even heart palpitations. Folate can help prevent birth defects like spina bifida and brain defects in developing babies.

Singh reported similar inconsistencies in testing and follow up action in a similar study in Georgia and Missouri published five years ago. He suggested then that serum folate levels be tested on admission as an indicator of nutritional status.