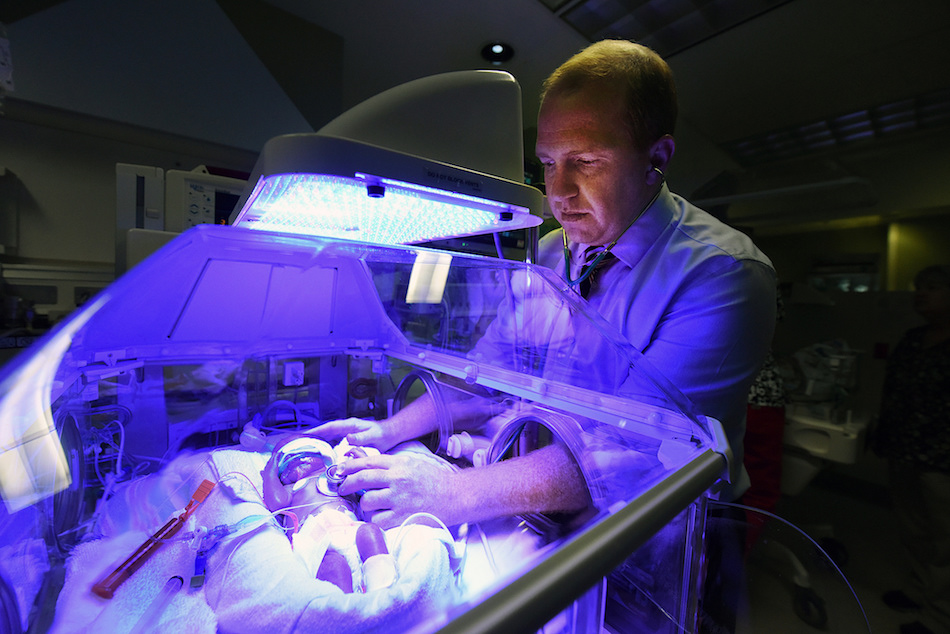 AUGUSTA, GA – Babies born at both low and high birthweights appear to be at increased risk for cardiovascular disease and type 2 diabetes, researchers report.

For reasons that remain unclear at least in the smaller babies, both birthweight extremes appear to increase the likelihood of developing dangerous fat around major organs in the abdomen like the liver and pancreas that significantly increases these risks, said Dr. Brian Stansfield, neonatologist at the Children’s Hospital of Georgia and the Medical College of Georgia at Augusta University.

By adolescence, these children have more visceral adiposity – a stand-alone risk factor for cardiovascular disease – and signs of related problems such as insulin resistance and inflammation than their average birthweight peers, according to a study of 575 adolescents, now age 14-18, that researchers divided into three groups by birthweight.

The findings were independent of other usual cardiovascular risk factors such as lower activity levels and socioeconomic status as well as higher body mass index – weight divided by height – which actually did not vary much among all three birthweight groups, according to the study in The Journal of Pediatrics. For the small babies, it may be an unfortunate inevitable.

“The 5-pound baby, regardless of whether he grows up to be obese, normal weight or thin is going to have more visceral adiposity than a similar child with a normal birthweight,” said Stansfield, corresponding author. A heavy baby, on the other hand, who exercises and eats healthy as he grows may reduce the risk.

The take-home message for mothers-to-be is an old one, Stansfield said: Don’t smoke and do breastfeed. Maternal smoking is the number one cause of low-birthweight babies and breast milk may be protective. The take-home message for his fellow physicians is: When assessing cardiovascular risk in adult patients, include birthweight as a factor, he said.

The hypotheses about why both extremes are affected also include extremes: caloric restriction and protein deprivation during development in the low-birthweight babies and the mother’s nutrient-dense diet in the heavier ones. For example, a rat model of calorie restriction during pregnancy shows resulting low-birthweight offspring with big appetites and eventually high levels of insulin in the blood.

Perhaps the most confusing and harmful part is that for the low-birthweight babies, their lifetime risk of cardiovascular and related disease may be independent of their body composition as an adult.

“I may not be able to look at you and tell. That is why we are identifying risk factors,” Stansfield said.

Continuing conflict centers around whether being born small by itself is a risk factor or if it’s because small babies tend to catch up in growth in that first year of life. It’s called the growth-acceleration hypothesis – so that a 5-pound baby and a 7-pound baby both tend to get to nine pounds in about one or two months.

“This period of time when that small baby is growing quicker than others may start to induce some of this phenotype. We just don’t know,” he said, noting that’s one of many areas that need more study. Small babies tend to have higher insulin sensitivity so when they are fed a calorie-dense diet, the insulin sensitivity may lead to more efficient nutrient and ultimately fat storage, he said.

Since much of this accelerated growth occurs in the first few weeks of life, it may be that a diet of breast milk – which is naturally low in calories and dense in needed nutrients – may help babies avoid this unhealthy and likely permanent accumulation of fat around their organs, he said.

The researchers literally divided the group in thirds by birthweight so there were actually some normal- weight babies in all three groups. But as they drifted away from the normal in either direction, it appeared to cause problems.

Normal birthweight is considered 2,500 (about 5.5 pounds) to 3,800 grams (about 8.4 pounds). Low birthweight can result from growth restriction that can happen at any point in the pregnancy, often from placental insufficiency, which can result from problems like the mother not getting adequate nutrition or the placenta inexplicably slowing or stopping delivery of what the baby needs. Low birthweight also tends to run in families and/or can result from the mother’s poor nutrition, smoking and other factors. He notes that babies who experience poor delivery of nutrients via the placenta throughout pregnancy, probably are most at risk.

Magnetic resonance imaging was used to measure subcutaneous abdominal tissue – typically visible belly fat – and visceral adipose tissue. The two tend to go hand-in-hand unless they don’t, Stansfield noted. Most of the teens in the study were at least in the later stages of puberty and most of the females had begun to menstruate. Overall, 11 percent were overweight and 16 percent were considered obese.

An international study of nearly 650,000 individuals in 26 countries published in 2012 in PLOS ONE indicated that low birthweight results in a low risk of later being generally overweight while high birthweight babies are predisposed to a lifetime of overweight. Most studies have found something similar, Stansfield said.

The new study was supported by the National Institutes of Health. Stansfield received the 2016 Clinical Science Young Investigator Award for the study at the recent annual meeting of the Southern Society for Pediatric Research.