Klaassen is 2016 Resident of the Year 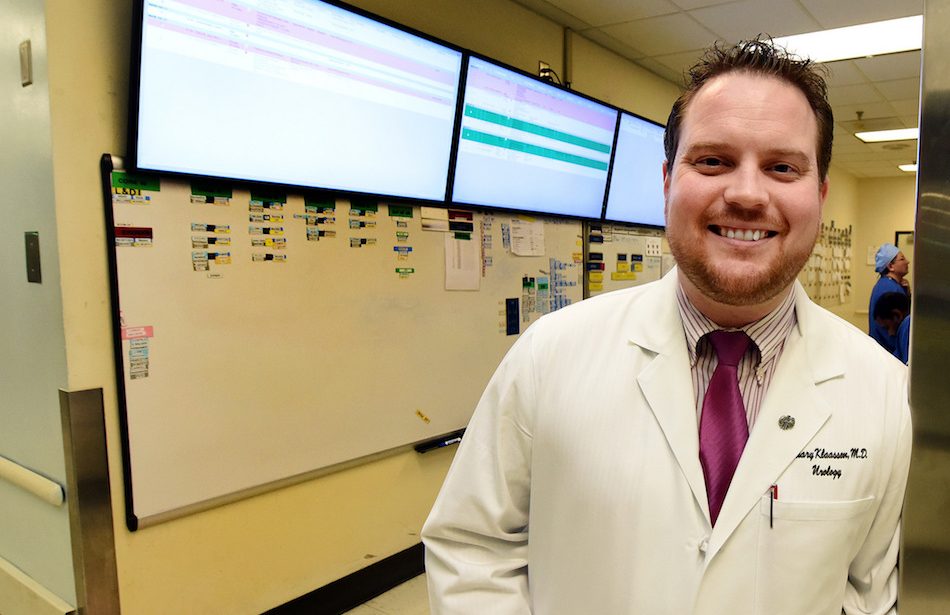 As a fourth-year medical student at St. George’s University Medical School in Grenada, Klaassen was 99 percent positive he was headed for a career as a vascular surgeon. Until a call from a family friend in New Jersey changed everything.

“This friend, who was a urologist, said ‘Come spend four weeks with me. I think you’ll like urology,’” Klaassen remembers. “I was in love with the field in four days. It was also September before the Match (in March).”

Knowing how selective the urology match already was and knowing being from a foreign school would make matching in such a competitive field even harder, Klaassen made another life-changing decision. He took a year off to do research in New Jersey and entered the urology match the following year.

That decision to essentially put his and his family’s life of hold paid off when Klaassen landed a spot in the Urology Residency Program at the Medical College of Georgia and Augusta University Health in 2011.

Klaassen is MCG’s 2016 Resident of the Year.

A native of Canada, he grew up a hockey player in the prairie province of Saskatchewan. He had aspirations of playing professionally but didn’t excel at the sport like he did at school. “No one in my family was in medicine,” he says. “But I took anatomy and biology and knew I wanted a career in medicine.”

After moving to Vancouver, he applied to the University of British Columbia School of Medicine twice but didn’t get in. Convinced he was going to be a doctor, he applied and was accepted to St. George’s. Two years of basic sciences curriculum in Grenada was followed by two years of clinical rotations in the United States. “Going to school there was great – my wife and I ran on the beach every day,” Klaassen says. “But we worked hard.”

Hard work continued through medical school and during his urology residency at MCG and Augusta University Health. It was during residency that he says he found his niche in the field, caring for patients with urologic cancers. “I found that I really enjoyed that aspect because I love talking with patients and their families. I love the operations, the follow-up care, all of it really,” he says. “I feel like, as a cancer surgeon, we get to treat all aspects of the patient – physically, spiritually and psychologically.”

During his fourth year of residency, Klaassen and one of his urology mentors, Dr. Martha Terris, chief of the MCG Section of Urology, co-authored a paper on the psychology of genitourinary malignancies. They found that older, single white males with advanced bladder cancer have the highest suicide risk among those with other cancers of the male genitals and urinary system. The study, which appeared in the journal Cancer, was the first assessment of that group of patients’ suicide risks.

“The older, white, single male is already at higher risk in the general society for suicide; add on the fact that he has advanced bladder cancer, and this is a high-risk patient. But this has taught me that we have to look for warning signs in all these patients,” Klaassen said when the study was published.

After he wraps up residency this month, Klaassen and his family, which includes his wife and three children under age eight, will head back to Canada, where he will complete a two-year Society of Urologic Oncology Fellowship at the University of Toronto and the Princess Margaret Cancer Centre. Then he will head back as a faculty member to the place he credits with making him the physician and surgeon he wants to be.

“I owe this place a lot,” he says. “I mean these are the people who got me into this field when I was accepted into the residency program. Not to mention there are tremendous opportunities here – plenty of patient needs and great opportunities to grow as junior faculty.”