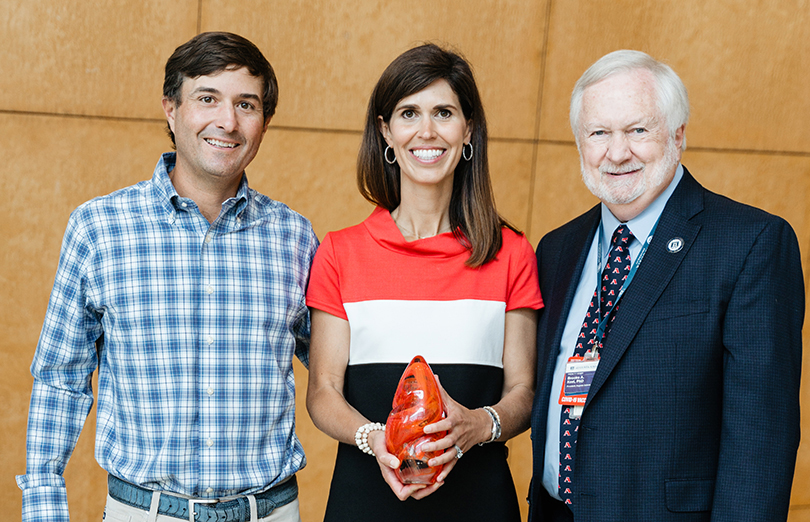 Golfer Kevin Kisner and his wife Brittany have been recognized with the annual Augusta University President’s Award for outstanding philanthropic support to the Children’s Hospital of Georgia. President Brooks A. Keel, PhD, announced the news May 5 during the President’s Spring Celebration.

“One of my greatest honors as president of Augusta University is to present the President’s Award to those who have made a remarkable impact on our institution,” Keel said. “It takes a leadership gift from people in our community like Kevin and Brittany Kisner to truly make a difference in what we do here. The Kisners are not just giving money; they are helping us build a dedicated program in pediatric development and behavioral health that will serve children and impact them for their lifetimes.”

Since the Kisners could not attend the spring celebration, President Keel presented them with the award earlier in the week when the couple visited the Health Sciences Campus to present a $1 million check to Children’s Hospital of Georgia, Augusta’s only children’s hospital.

“I’ve always wanted to give back once I reached a platform such that I could give back,” said Kevin Kisner, an Aiken native and professional golfer who has earned four PGA Tour victories and 45 Top 10 finishes.

“Everyone can give something, and we hope we inspire others to give,” said Brittany Kisner, co-founder and board chair of the Kevin & Brittany Kisner Foundation. Brittany Kisner said she first noticed a need for more pediatric development and behavioral health services at Children’s Hospital of Georgia several years ago when she worked there as a speech pathologist. Health experts report that the pandemic has intensified this need.

The Kisners presented a $50,000 gift to Children’s in December 2020 to help start a part-time clinic for children with health challenges. A year later in November 2021, the Kisners pledged $5.3 million, giving $300,000 as an immediate gift, to help establish and name a center for pediatric development, behavioral health and wellness. Their $1 million gift this week was the first installment of this substantial commitment.

“We felt like we started so small in what we were able to do, but through personal giving and giving of the foundation, and then going out to other donors and asking them to give to this endowment, it is unbelievable that we can reach a point where we could receive an award like this,” Brittany Kisner said.

“To be thought of by the president that we’ve done enough to get an award with his name on it – that’s pretty spectacular,” Kevin Kisner said. 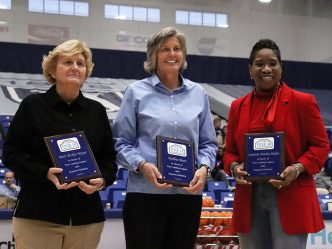 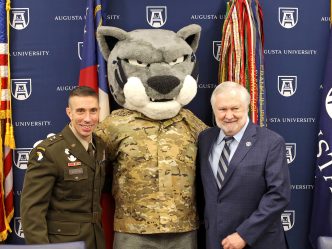