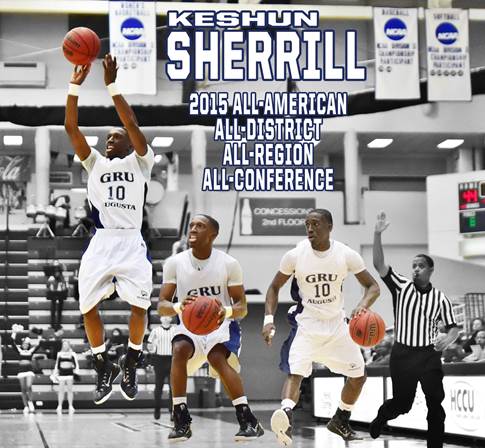 As well as earning All-District honors earlier today, Jaguar sophomore guard Keshun Sherrill has been named to the 2015 NABC Coaches’ Division II All-America team. Selected and voted on by member coaches of the NABC in NCAA Division II, these 16 student-athletes represent the finest basketball players across America.

Sherrill, a Daktronics/DII Conference Commissioners Association All-Region Team member and Peach Belt Conference first-team selection, averaged 18.7 points per game and shot had a 50.8 field-goal percentage and an 84.7 free-throw percentage to help lead the Jaguars into post season play. He joins Montevallo’s Troran Brown on the All-American list, the only two representing the Peach Belt Conference.

Sherrill is now an All-American, All-District, All-Region, and an All-Conference player for his efforts in the 2014-15 season.

The sophomore-guard from Cleveland, N.C., was voted first-team All-Conference for the Peach Belt. He was third in the league with 561 points and was the best three-point shooter with a 47.9 three-point percentage. Sherrill paced the Jaguars in scoring with 18.7 points per game and in field goals made with 189.

He played the most minutes of any Jaguar and his 127 free-throws made were third best in the league while his 84.7 free throw percentage was sixth best. He led the team in scoring in 16 different games – highlighted by his career-high 37 points in the season opener against Anderson on Nov. 14, 2014.

Located in Kansas City, Mo., the NABC was founded in 1927 by Phog Allen, the legendary basketball coach at the University of Kansas. The NABC currently has nearly 5,000 members consisting primarily of university and college men’s basketball coaches.