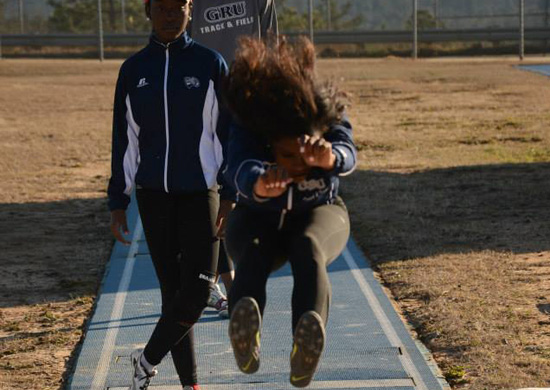 The GRU women’s team had four first-place finishes and 19 top-10 finishes and took the top title out of 11 teams.

“It was great first meet, despite some windy conditions,” head coach Adam Ward said. “Our men and women were tough and picked up several wins, top-five finishes and a few school records – great momentum for the new season!”

The Jaguars, coached by Adam Ward, set four personal records on Saturday in Savannah. For women’s shot put, Javoni Canty took second overall with a throw of 11.61m and for the women’s 400 hurdles, newcomer Heather Hammett won the overall title and posted her best time ever of 1:06.72.

Overall for the women’s events, the Jags showed well with Angelica Clayton besting 23 other competitors to win the 100 meter dash in 12.74. In the 200 meter, Dejah Johnson took second for the Jags in 26.87, and in the 400 meter dash, Aaliyah Pettway took third and Ashley fourth for GRU.

The Jaguar women posted three in the top 10 in the 800 meter run, sparked by Taylor Shaw’s third-place finish in 2:40.02. As well as winning the 400 hurdles, Hammett finished in the top three for 100 meter hurdles, while teammate Jordan Humphrey showed off her distant skill in the 500 meter run to take second in 19:0036.

The Jaguar women also won the 4×100 meter relay and the 4×400 meter relay, and Sabiyah Broderick notched third in the javelin throw. Next for GRU, the men’s and women’s teams travel to the Columbus State Cougar Invite on Feb. 28.