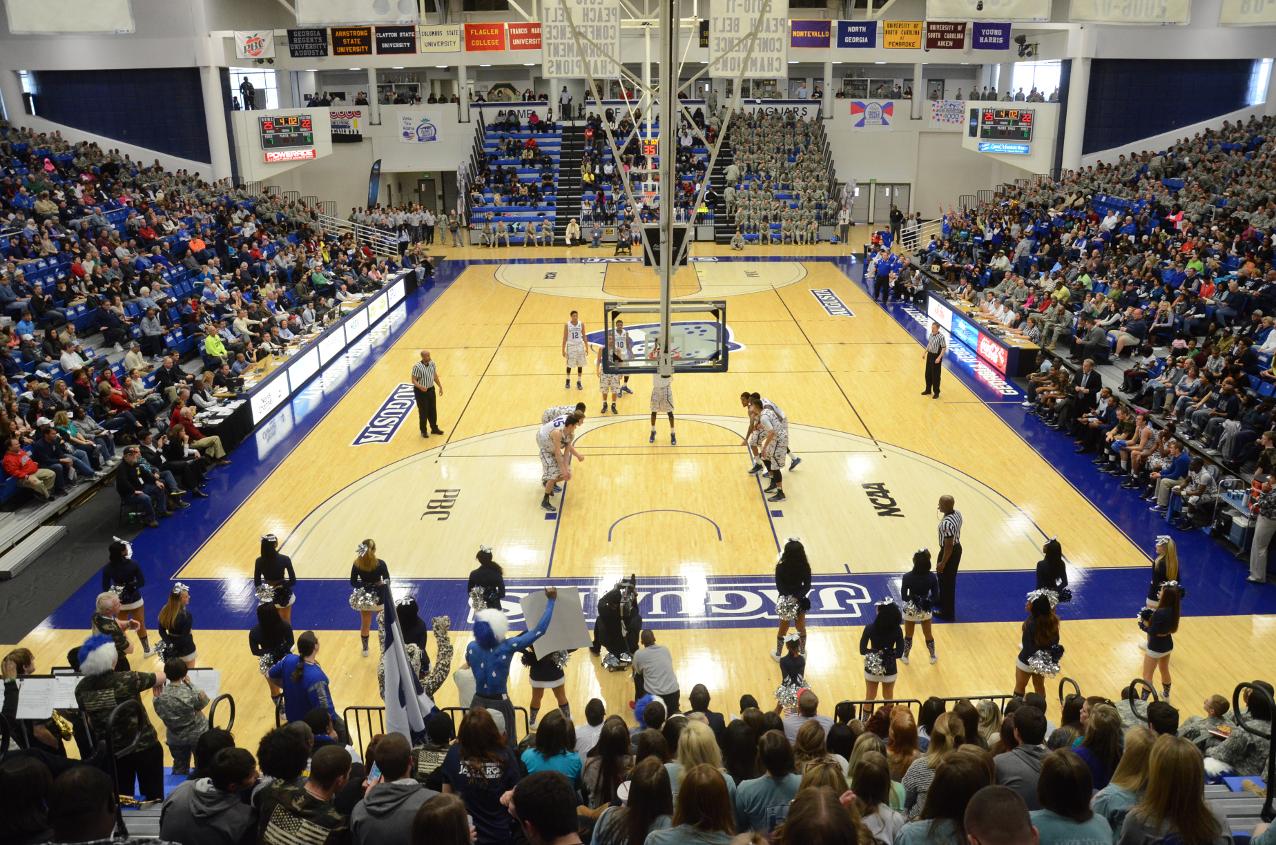 During a nationally televised game by CBS Sports Network in 100 million homes, the GRU Augusta men’s basketball team extended its winning streak to 10 in a row by defeating Lander, 71-61, in Peach Belt action Saturday afternoon in Christenberry Fieldhouse.

There were over 1,000 Fort Gordon soldiers in attendance as a part of Military Appreciation Day, and the military-themed jerseys worn by both squads were auctioned through the NCAA for a new scholarship fund, the Veteran Military Hardship Completion Scholarship to support veteran and active-duty military GRU students.

With less than 10 minutes remaining in the first half, the Jags still clung to a three- point lead, 18-15.

Lander junior-wing Tobiasz Hose drove to the basket for a one-point differential, 18-17. Big man Asger Hjorth sunk a layup to give the Bearcats their first lead contest at 19-18.

However, a layup from Thomas allowed the Jags to reclaim the scoring advantage and a 10-4 run pushed the Jags margin to 30-23.To end to the first half, Hose canned a three-pointer at the buzzer to cut the score to 30-28.

The Jags continued to impose their will in the second half. The squad ignited an 11-4 run to force Lander to take a 30 second timeout and take a 41-32 lead.

At the 17 minute mark, sophomore guard Keith Crump knocked a jumper from the elbow to give the Jags the first double-digit margin, 43-32. Two minutes later, senior forward Devon Wright-Nelson found 5-foot-9 Sherrill in transition for a one-handed dunk to put the crowd on their feet.

The Jags maintained a 13-point lead, 57-44, deep into the second half, holding the Bearcats offense below 40 percent shooting from the field, and 25 percent from three-point land.

In the final two minutes, the Jags were able to milk the clock, snag rebounds, and play smart defense to secure the conference victory.

The Jags finish out the regular season schedule at home with their second meeting against rival USC Aiken on Feb. 25 at 7:30 p.m. The game is a BLACKOUT wear fans ae encouraged to wear black!!

Fans of Jaguar Athletics can subscribe to the email listserve by clicking here.