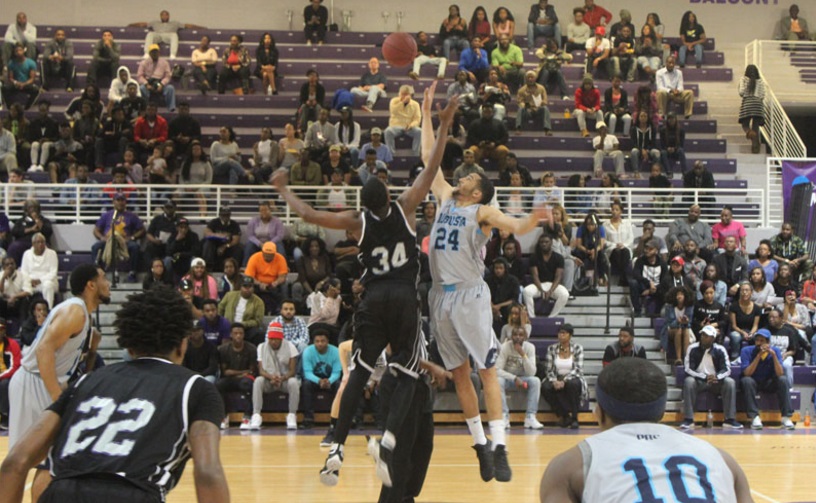 The Lions (2-19) haven’t beat Augusta (20-6) since the 2005 season, but they made it interesting. Paine made it 71-68 with seven seconds to play in the game and forced a turnover on an inbound AU pass. The Jags held off the Lions in the final seconds for the victory.

Each team hit six treys in the first half. Paine ended the game going 10-for-30 from the arc and Augusta 9-for-18 (50 percent). The rebound battle went to the Jaguars 41-28, but each team matched 20 points in the paint.

Augusta was paced by sophomore Deane Williams and senior Keshun Sherrill with 14 points each. Sophomore Tyvez Monroe managed 13 points in the win.

Monroe made his 52nd and 53rd three pointers to open the game for Augusta. The Jags took an 8-0 lead, but PC scored eight straight for an even battle. Paine led by five with seven minutes left in the first half and they remained ahead to take a 34-32 lead into halftime.

The first half was a game of deep shots as each team buried six three pointers in the first 20 minutes. Augusta sophomore Ben Ursich assisted Monroe on another trey to begin play in the second half.

With 12:40 on the clock, Ursich set up TC Fields for a wide open dunk that took the lead for the Jags. The lead changed three times in the next three possessions. PC trailed by a pair halfway through the half, but AU built a 10-point lead on a jumper from Fields.

Paine had themselves back in a three-point game with under 10 seconds, but AU survived.

The Jaguars host the 2017 Homecoming Games on Saturday, Feb. 13 with a Peach Belt Conference doubleheader in Christenberry Fieldhouse against the Lander Bearcats. The women tip at 1:30 p.m. and the men follow at 3:30 p.m.