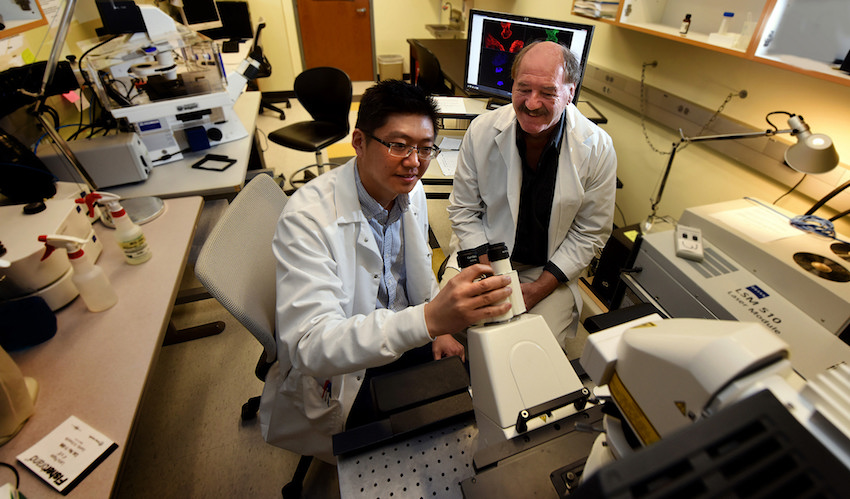 AUGUSTA, Ga. – A protein that is constantly expressed by cancer cells and quiescent in healthy ones appears to be a solid target for reducing cancer’s ability to spread, scientists report.

The WASF3 protein enables cancer cell invasion, and by interrupting its relationship with another protein that helps WASF3 keep its form and function, scientists have suppressed the ability of highly invasive human breast and prostate cancer cells to metastasize through an artificial surface that mimics invading a blood vessel.

“Ninety-five percent of all cancer deaths are due to metastasis, not due to the primary cancer,”

said Dr. John Cowell,  professor of pathology at the Medical College of Georgia at Augusta University and associate director for basic science of the university’s Cancer Center. “If metastasis is your target, this is the protein you should be targeting.”

Cowell is corresponding author of the study in the journal Cancer Research, which shows interfering with WASF3’s relationship with CYFIP1, is deadly to WASF3. “CYFIP1 stabilizes the protein complex,” he said. “The whole thing has to be together to be stable; otherwise it just falls apart.”

The WASF3 finding has applicability to a wide range of cancers, including other common cancers such as melanoma and pancreatic cancer, Cowell said.

His team first suspected WASF3’s role in metastasis in 2002 when they first identified the gene in a child with neuroblastoma. They knocked the gene out a decade ago and saw it stopped cancer spread, then used mass spectroscopy to discover the proteins WASF3 interacts with and found CYFIP1 high on the list.

More recently, his team worked with Dr. Eileen J. Kennedy, assistant professor in the University of Georgia College of Pharmacy, to develop stapled peptides that essentially disconnect WASF3 from its stabilizing force CYFIP1. “It’s the same effect. WASF3 goes away and, guess what, so does invasion,” Cowell said. There is already one clinical trial underway for a peptide that interrupts the interaction between two other proteins. “So the therapeutic pendulum is swinging toward these peptides,” he said.

The scientists note that the cells’ ability to proliferate – not considered a part of metastasis in which breast cancer cells, for example, spread to the lungs – was unimpeded. “Cells can and will grow at the primary site,” Cowell said. More traditional cancer therapies, including drugs and/or surgery, often are effective at removing a large mass that can result from such proliferation. However, there are currently no therapies available that target metastasis or WASF3 specifically, Cowell said.

“We thought: Let’s find out if we can target the protein-protein interaction,” he said. CYFIP1 essentially enables WASF3 to sit on ready inside cells. In a healthy cell, WASF3 could be active for a short time to aid wound healing, for example, then go quiet again. But cancer hijacks its ability to promote metastasis and keeps it turned on. In fact, higher WASF3 expression has been documented in a wide range of metastatic cancers.

Cowell suspects that the usually healthy relationship also is part of a sort of fail-safe mechanism. “Inside your cell, there are surveillance mechanisms that are watching proteins all the time and if they find a protein that is not folded exactly right, they kill it. CYFIP1 holds WASF3 in its right conformation to function and also to avoid the surveillance system that would normally kill it.”

While the entire WASF family of proteins has been implicated in healthy cell movement, only WASF3 seems to help cancer cells invade and metastasize. When the scientists knocked down WASF1 and 2, which also bind to CYFIP1, the cancer cells’ ability to invade was not affected.

Cowell notes that there are likely many genes involved in metastasis and many likely intersect at some point. “The critical thing is, all you have to do to a cancer cell is kill the function of this protein, and it can’t metastasize.”

The scientists are finding similar results in mice with breast cancer and in zebrafish given human cancer cells. Future studies will need to examine stability and toxicity of the stapled peptides. “The stage we are at is the proof of principle that targeting this particular complex has the potential to suppress invasion or metastasis,” Cowell said.

Cowell and his team reported in 2010 in the British Journal of Cancer the increased expression of WASF3 in high-grade human prostate cancer tumors and that knocking down WASF3, reduced prostate cancer cell motility and invasion.

Dr. Yong Teng, assistant professor of biochemistry and molecular biology at MCG and a member of the Molecular Oncology and Biomarkers Program at the Cancer Center, is the new study’s first author. The work was supported in part by the National Cancer Institute. 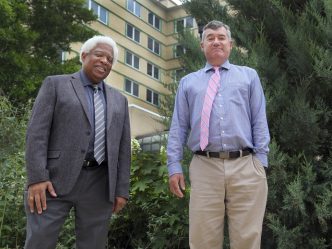