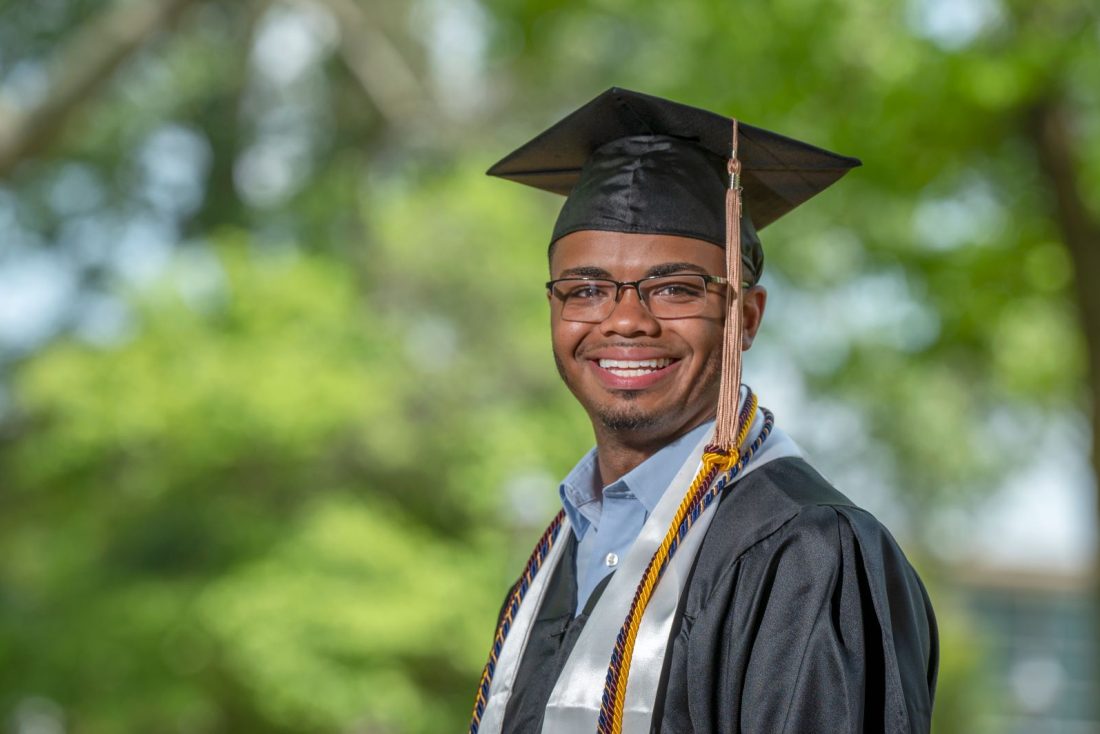 Transfer student DeAndre Cochrane started college in 2014 — but this spring, after an eight-year journey, he’ll walk across the stage with the degree of his dreams in hand.

Originally from Brooklyn, New York, Cochrane began his career at Augusta University in August 2020 as a transfer student. He’d previously spent three and a half years at Albany State University pursuing a biology degree, and had even considered medical school. This path seemed the natural choice for him, due to his family’s career interests and his natural skill in the sciences.

“In high school, I had an affinity for science in general. I was doing well at it. And there are people in my family who work in the health field, some physical therapists, some RNs. And there was some influence there. And so that kind of motivated me to go into the sciences, and I could see myself in a white coat. I liked the idea of it.”

But he was conflicted: During all his time studying the sciences, it never felt like a fit — and his interests were pulling him in a different direction.

“During my time at Albany State, I switched my major from biology to nursing back to biology, and even during that time, I would intentionally wake up earlier to spend time learning about the stock market and business concepts — and not study organic chemistry,” he joked.

Despite knowing his passion was in financial services, the idea of veering off the health care track so late in his education worried him.

“There was such a strong pull to go into business, but I just knew changing your mind prolongs your collegiate career, and I was scared to do that. But I’m glad that I did it because you know, now I think to myself, ‘What would I have done with a biology degree, personally?’ Of course there are many things you can do, but would I have been happy?”

So after nearly four years, Cochrane left Albany State and moved back to Augusta, where his family has lived for the past 15 years. He spent two years working, taking online classes and deciding what to do next — and he eventually enrolled in the Hull College of Business to pursue his true passion.

Cochrane loves studying business, and specifically financial services, because money has the power to transform lives. But unfortunately, many families don’t have the tools to use it efficiently.

“I think a lot of people face a challenge in their own personal life when it comes to finances. And I think that’s just because there’s a lack of education around it,” he said.

“Money is a tool. And I think that people should have that perspective: How can I use this resource? How can I use this tool to get me to where I want to be and do the things that I enjoy doing? People want to spend time with family, people want to travel and they have these visions and dreams of these things, and it requires money. And you have to manage it properly.”

To support families’ financial goals, Cochrane has interned at Northwestern Mutual for nearly a year and a half as a financial representative. In this role, he meets with clients to build out their financial management plans, where he counsels them on risk management and resource allocation.

After graduation, he plans to move to Atlanta and continue his work with Northwestern Mutual.

Reflecting on his life four years ago — when he left Albany State and didn’t know his next steps — he knows now that he made the right choice.

“What this journey has shown me is that I can rise to the occasion. I can persevere, and AU has been there as a support system. I’ve had family and things like that, but AU has provided resources for me to excel and thrive, and help me grow.”