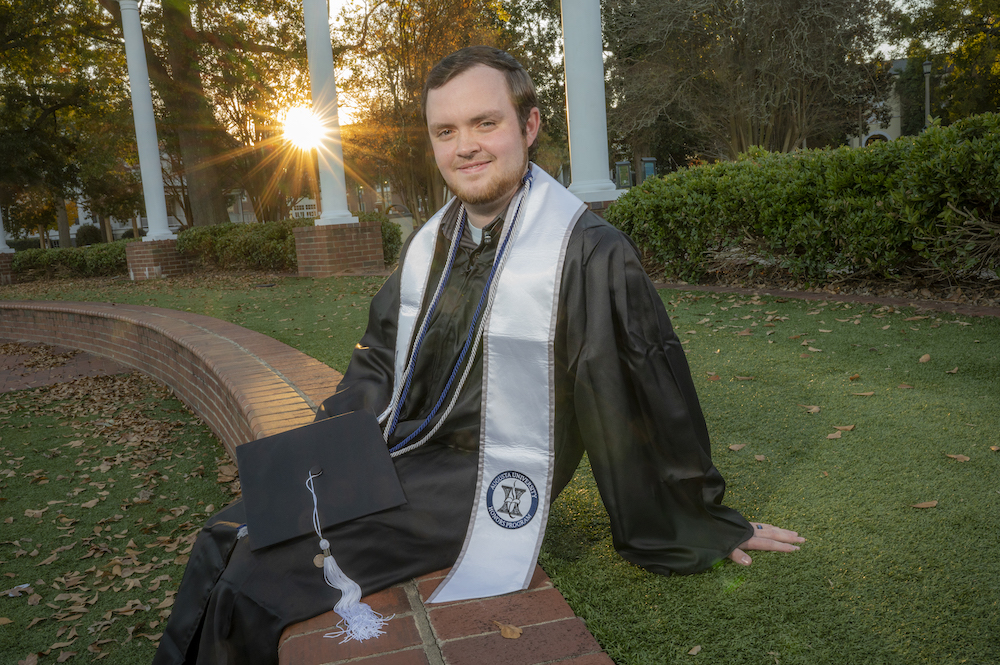 When Joshua Rutland first began his college career at Augusta University in 2016, he initially thought about pursuing a law degree.

“I liked the idea of being involved in policy making and guiding the country toward a better future, but eventually I didn’t really see a way for me to accomplish those goals through a law degree,” Rutland said. “Law just wasn’t a good fit for me.”

It wasn’t until his junior year in college that he discovered his path for the future in the Master of Arts in Intelligence and Security Studies (MAISS) program at Augusta University.

“To be honest with you, I did not know the MAISS program existed up until my junior year, when I had a conversation with the MAISS director, Dr. Craig Albert, about not knowing where my life was going and not knowing what I wanted to do,” Rutland said. “I still look back on that conversation as a turning point because he told me about this exciting new program. He said the people that were coming out of this program were equipped to do the kind of work I wanted to do in the intelligence and security worlds.”

Rutland, who received his bachelor’s degree in political science from Augusta University in 2020, was accepted into the MAISS program and immediately felt at home.

“Once I got involved in the MAISS program, I knew this was where I wanted to be,” he said. “I was very confident, even by the end of my first semester, that this was what I wanted to do. The MAISS program is the best thing that has happened to me since I came to Augusta University. And I can’t say enough about Dr. Albert’s mentorship. He has been there for me personally and academically since my junior year when I first met him, and that has continued up until today.”

The MAISS program has brought out his passions for foreign policy, international relations, the promotion of cybersecurity and raising awareness of its importance in the modern era, Rutland said.

Ever since the MAISS program began in 2018, Augusta University has seen a dramatic increase in enrollment in the program. The first full-time cohort was eight students in fall 2018 and it has grown to a total of 44 students who are currently enrolled, Albert said.

The MAISS degree from Augusta University is unique from other colleges around the country because it takes an integrated approach to the study of intelligence and security, with a focus on strategic cybersecurity and modern intelligence methods alongside traditional notions of national and international security, Albert said.

As Rutland prepares to walk across the stage at the James Brown Arena and accept his master’s degree from the MAISS program on Friday, Dec. 10, he is excited about what the future holds.

“Right now, I am working as a graduate assistant and I am also working downtown with the Department of Emergency Medicine as a researcher,” Rutland said. “But, in the next few months, I’m hoping to start interning with Army Cyber on Fort Gordon.”

Throughout his college career at Augusta University, Rutland has taken advantage of research opportunities with several faculty members from the Department of Social Sciences, including Drs. Lance Hunter, Martha Ginn, Gregg Murray and Craig Albert.

The resulting articles have been published in some of the top scholarly journals in political science and security studies, said Dr. William Hatcher, interim chair of the Department of Social Sciences in Pamplin College of Arts, Humanities, and Social Sciences.

“My mentality on publishing articles was, essentially, if somebody asked if I was interested in working on something, the answer was, ‘Yes,’” Rutland said, laughing. “It started with my undergrad honors thesis and meeting Dr. Hunter. We did a paper together that ended up getting published, and that was where I really got a taste of what the publication process was like and what it was like to write professionally. I liked it because it was challenging, but it was also fun.”

Rutland, an Augusta native, was proud to receive the Master of Arts in Intelligence and Security Studies Outstanding Student Award for 2021.

Besides his inspiring professors in the Department of Social Sciences, Rutland said he also received support and guidance throughout his college career from the Augusta University Honors Program.

“The honors program has meant my future,” Rutland said. “It helped me figure out what I wanted to do and it helped me make professional connections that are guiding me toward getting the career that I want.

“It helped me form a regimented life path for myself where I’m serious about what I do and I’m passionate about what I do, and I’m not just doing something for the sake of it or because I feel like I have to,” he added. “I actually enjoy what I do now.”

This fall commencement will be particularly special for Rutland because his fiancée, Joannah Gourley, is also graduating with a degree in anthropology from Augusta University.

Written by Stacey Eidson
Cheer on our graduates with ‘In the Wild’ podcast
FacebookTwitterPinterestWhatsApp
Graduation Week 2021: Health services grad proves it’s never too late to chase your dream