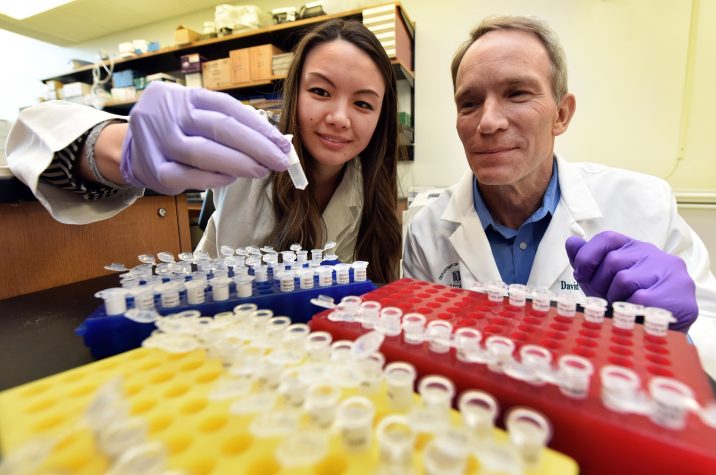 In salt-sensitive hypertension, immune cells gather in the kidneys and shoot out free radicals, heightening blood pressure and damaging this pair of vital organs, scientists report.

These highly reactive chemicals, also called reactive oxygen species, or ROS, are a byproduct of our body’s use of oxygen that our immune system uses to kill invaders. But at high levels, they also are known to alter key components of our body like proteins, and contribute to a myriad of diseases from hypertension to cancer.

“It’s a beneficial mechanism of our immune system except when it becomes chronic and uncontrolled,” says Dr. Justine M. Abais-Battad, physiologist in the Department of Physiology at the Medical College of Georgia at Augusta University and corresponding author of the study in the journal Free Radical Biology and Medicine.

“That is what we think is the problem,” says Mattson, Georgia Research Alliance Eminent Scholar in Hypertension and senior study author.

For their studies, the scientists used an established animal model for salt sensitivity, the Dahl SS rat. They also have a version of that rat that lacks NADPH oxidase bodywide, an enzyme complex and major producer of ROS that’s elevated in the kidneys of salt-sensitive rats. The rat missing NAPDH oxidase is protected from hypertension and kidney damage on a high-salt diet, another clue that ROS is a big factor in hypertension, Abais-Battad says.

To pinpoint the source of the ROS cells, they restored the ability of that NADPH oxidase knockout rat to make the ROS-producing enzyme but only in immune cells. All cells can make ROS but they suspected the immune cells were the troublemakers here.

“ROS specifically produced by the immune cells is enough to give these rats hypertension,” says Abais-Battad. “That is a big problem,” says Mattson, but it points to a clear potential treatment target.

“If we can begin to understand an approach where we could block this production of free radicals by those cells particularly in the kidney, there is a potential treatment,” he says.

While antioxidant therapies have failed for many maladies, Mattson says location is likely one reason. “They are just not getting to the right places,” he says. Knowing the cellular source of the ROS is important for designing effective therapies that will.

“Our study shows that ROS from immune cells causes salt-sensitive hypertension, and that targeted antioxidant therapies may be necessary to produce maximal beneficial and protective effects,” they write.

Mattson’s lab and others have linked hypertension with the immune system and increased immune cells in the kidneys. In salt-sensitive hypertension, the scientists have watched immune cells congregate around the kidneys’ submicroscopic blood vessels — already under super high pressure as part of their endless role of filtering blood —  and exacerbate pressure and kidney damage.

“They are sort of living on the edge anyway,” says Mattson. This damage ultimately shows up as protein in the urine, an indicator of the problem, Abais-Battad says.

A high-salt diet fed to normal rats doesn’t cause hypertension or that clustering of immune cells. Postmortem studies of humans who died from all causes indicated those with hypertension also had more immune cells in their kidneys along with increased kidney damage.

For this study, the scientists wanted to know why the immune cells move into the kidneys and what they are doing when they get there. Based on what they and others already had seen, they reasoned they could be producing ROS.

In terms of the true instigator, some theorize an errant immune system also is the culprit, driving up pressure a bit initially, and causing damage that attracts the army of ROS-producing immune cells. Mattson’s lab theorizes and has evidence that the problem actually starts with kidneys that do not eliminate salt sufficiently, which means fluid levels increase and so does pressure.

While it may be sound advice for all of us to lighten up on the salt, our kidneys will eliminate excess salt for most us. But in about half of people with hypertension, salt is a major driver and there are not currently tests to easily diagnose it or drugs that target this pervasive problem, Mattson says.

“All of us have all kinds of salts in our body and we need it to hold onto water, “Mattson says. “It’s only in maybe the last 50 years or so when we adapted to this Western, modern lifestyle where we are consuming excess salt that this becomes a problem.

“With a little bit of a pressure increase, you can go on a low-salt diet or eat more potassium or fresh vegetables, and probably bring your blood pressure down,” Mattson adds. “But if you have your immune system fully activated, the disease is amplified and I think that is where we get into trouble.“

There are a lot of high-salt culprits besides French fries, like frozen dinners and prepackaged foods, canned vegetables, packaged deli meat even some of our favorite condiments like ketchup. So while a low-salt diet may be helpful, it also may be harder than you think, they say.

There is evidence that suppressing the immune system can lower blood pressure but the scientists say that likely is not a smart or safe way to tackle the problem.

While they are working on both a test and targeted therapies for salt-sensitive hypertension, right now, determining salt sensitivity is essentially anecdotal when, in first steps to lower blood pressure, people find that dietary modifications, like eating less canned and processed foods, really start to work. “If you change your dietary habits and blood pressure comes down that would be a clue you have salt-sensitive hypertension,” Mattson says.

The scientists also note that as with many diseases, there are both genetic and environmental factors that contribute to hypertension.

Our fist-sized kidneys filter about a half cup of blood every minute, and are critical to maintaining a healthy fluid balance in the body, a blood pressure that ensures adequate blood and oxygen delivery bodywide, and eliminating things we don’t need like excessive salt, while resorbing things we do.

“If you just walk outside, you will see somebody who has this going on inside,” Mattson says of the pervasive health problem. “It shortens their life.”