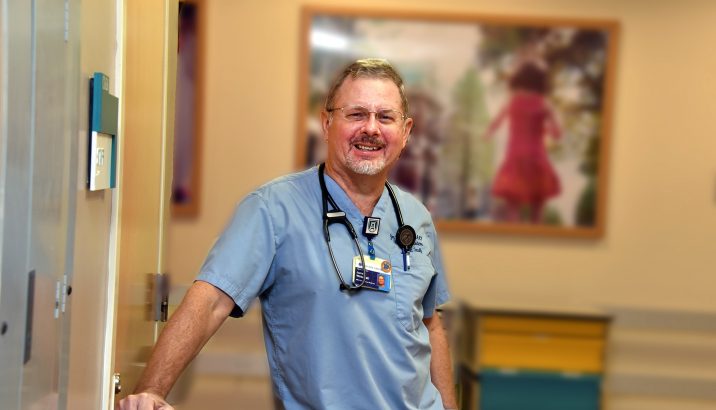 Flu season got off to an early start – and that could be a good thing or a bad thing, says an infectious disease physician at the Medical College of Georgia at Augusta University.

“The flu has been circulating for more than a month, and that is very early,” says Dr. Jim Wilde, a pediatric emergency medicine and infectious disease physician at MCG and AU Health. “The earliness of the season doesn’t mean a lot in terms of how severe it will be. It does mean it may be gone sooner – maybe by the end of February.”

A typical flu season usually begins in December and is over in late March or early April. Most seasons see two types of flu: A and B. The flu A virus, which changes its genetic composition every year and is a target of the annual flu vaccine, is usually first to arrive. Flu B is more static from year to year and the symptoms it causes are usually tougher on children because it has been around for a while; adults have been exposed and have developed immunity, Wilde says

“We’re seeing a lot of flu B early this year,” he says. “My concern is that we have flu B now and then flu A shows up this month and we may be in for a double peak this season,” he says.

While the flu vaccine is only about 50% effective for healthy adults and children, there are certain groups of people that should get the vaccine 100% of the time, he says. These include adults ages 65 and older, pregnant women, people with chronic illnesses, those who are immunocompromised, like someone with HIV or cancer, and those who come into regular contact those people, like physicians and other health care workers. Those with high-risk medical conditions also should see their doctor if they develop flu symptoms during periods of high flu activity, since they may be candidates for antiviral medications like Tamiflu and Xofluza, which target the influenza virus and generally shorten the duration of symptoms by 12-24 hours.

If you do find yourself or your children with symptoms like fever, sore throat, runny nose and cough, it may or may not be the flu. Many upper respiratory viruses like rhinovirus and adenovirus can cause similar symptoms, particularly in children. The main difference is that flu will cause more severe symptoms and for a longer period of time — most respiratory viruses last about 3-5 days.

“The attack rate for flu is about 10% of the population per year,” Wilde says. “That means you’re probably going to get flu once every 10 years. The reason people think they get the flu more frequently is because there are dozens of respiratory viruses that circulate during flu season, and they can mimic flu symptoms. Flu vaccine and medications like Tamiflu, are of no benefit against these other viruses.”

Symptoms of the flu typically last about 4-6 days, Wilde says, and when they last longer, it can be a sign of trouble.

“Any adult or child who is not getting any better by the fourth or fifth day, especially if they still have a fever, should be seen by a physician.” Symptoms indicating the flu may be turning into something more serious, like pneumonia, or that there is an underlying bacterial infection, include trouble breathing, inability to take fluids and low or no urine output, he says. “Those are the three big things that should drive people to the doctor. Other than that, use common sense. If someone is having pain in their chest, they need to see a doctor.”

Outside of the signs the virus is getting worse, there is no good reason why otherwise healthy people from ages 2-65 have to see a doctor if they have the flu, he adds. For those people, bed rest, lots of fluids and fever lowering medications generally suffice. Tamiflu and other antiviral medications that target influenza are only effective if given within 48 hours of the first symptoms. Most fevers will subside within 4-6 days, and while some symptoms like coughing and a runny nose may last longer “you’re not contagious anymore,” Wilde says. “What’s the mark of contagious? The fever.”