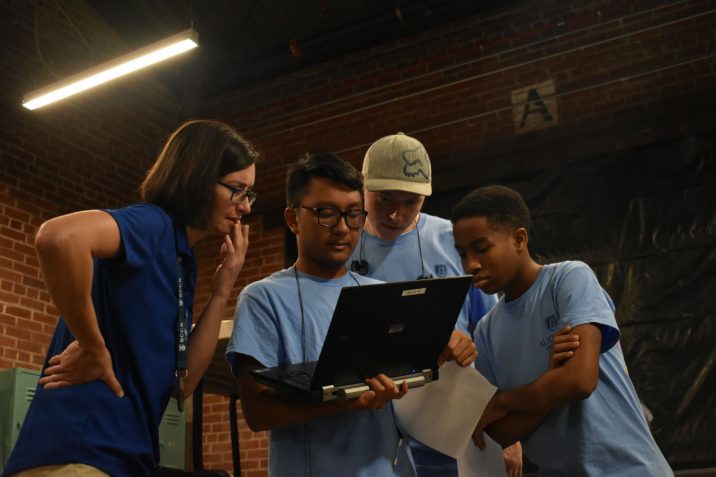 Summer camp is a special time to learn and grow new skills and talents.

Do any of these activities sound familiar to summer camp experiences you’ve heard about?

Thirty-six high school students from all over the United States got to do all of these things (and more) at the School of Computer and Cyber Sciences GenCyber camp this past week.

The School of Computer and Cyber Sciences at Augusta University hosted its fifth annual GenCyber Camp from June 22-29. Thirty-six rising high school juniors and seniors from as far north as New Jersey and Connecticut to students right here in our backyard were chosen to be a part of the 2019 GenCyber cohort. Over 100 students applied to be a part of this year’s camp program.

Not familiar with GenCyber? Here’s the key things you need to know about this special week of camp:

The week kicked off with an orientation and special keynote address at the Georgia Cyber Center from Security Onion Solutions Founder, CEO and proud Augusta University alumnus Doug Burks. Burks commended campers, reminding them how they’re at the right place and time pursuing an interest in the buzzworthy world of cybersecurity.

Counselors and campers wasted no time getting to work following orientation on Saturday, as lessons in how to set up a Raspberry Pi, Linux programming and a general overview of cybersecurity followed throughout the course of the next couple of days of camp.

Tuesday evening of camp brought an exciting opportunity for campers, as they joined 16 industry professionals for dinner. Organizations represented at this year’s career dinner included Security Onion Solutions, SOFtact Solutions and various specialists from NSA Georgia. Campers enjoyed interfacing with professionals in the field and learning about what they need to do now to succeed in a future career.

Wednesday at GenCyber brought a fun field trip to Fort Gordon for our camp cohort. Our camp crew started the day at the Army Cyber Center of Excellence, where students put their skills to use working through a mock phishing exercise with Army Cyber COE instructors.

Following the Cyber Center of Excellence exercise, students were transported across Fort Gordon to see inside the campus of NSA Georgia, a rare opportunity few can say they’ve had. Students saw a bird’s eye view of the NSA Georgia Command Center from the commander and deputy commander’s offices and learned the importance of how things they do now could potentially impact their future in a cybersecurity career.

One of a few highlights of the NSA Georgia tour was learning about polygraphs and witnessing a polygraph demonstration from one of their own as the guinea pig. Nothing to worry about here, though; this was much easier than the actual polygraph questions asked during an official exam.

“Even though I was only asked what day of the week it was, it was still scary being hooked up and taking it in front of my friends,” said Destiny Barrett, an Evans High School student who was chosen to take the polygraph. “I’d love to work for the NSA one day, though, so it was good practice for me whenever that day comes.”

Have you ever heard a chorus of students humming Europe’s famous hit, “The Final Countdown” before? Besides the buzz of excitement as students worked with their robots in preparation for the big race at the end of the week, this was one of many sounds that rang inside the Physics and Innovation Lab on Thursday at GenCyber. Teams of campers introduced their robots to their peers as they took the robots for a practice lap in the PI Lab prior to the Grand Prix.

While students typically started camp activities at the Georgia Cyber Center, they switched things up Friday, starting at the PI Lab on the Summerville campus, where the fifth annual GenCyber Grand Prix was held. Camper teams were given some additional time to give their robots a few test laps before the official Grand Prix began. From the moment students were let loose to work with their robots some more, the excitement grew greater and greater as minutes ticked away before the first heat of the Grand Prix kicked off.

The 2019 GenCyber Grand Prix was an epic race for the books! The goal? Be the first robot to cross the finish line in one lap, at or under 100 seconds.

While some robots experienced technical difficulties during the individual heats, the championship race was an exciting neck-and-neck battle between Team Excalibur and Team End Gamers.

Team End Gamers broke away toward the finish line, flexed on the competition and are the 2019 GenCyber Grand Prix champions.

Team End Gamers even coded a special wiggle victory dance once it crossed the finish line!

It seemed as if we blinked and the GenCyber 2019 graduation ceremony was upon us. The second Saturday of GenCyber, students reconvened at the Georgia Cyber Center for one final gathering before their official graduation. NSA Georgia Commander, Col. John Chu, was the special graduation speaker, and reminded students of the importance of the relationships that were formed this week.

Without a doubt, lives were impacted this week as newfound friends introduced their family and friends to one another and said their goodbyes at the conclusion of graduation.

A special highlight to note about this GenCyber cohort: Nearly one-fourth of this year’s cohort were females. At a time when women are not well represented in this field, it was encouraging to see so many well-rounded women desiring to learn more about this ever-changing industry.

“It’s kind of disappointing that there aren’t more girls, but it’s also really cool because we did break that barrier,” said Aniyah Bussey, an Evans High School student.

How can you get into this group picture for GenCyber next year? The School of Computer and Cyber Sciences is always looking for counselors to get involved with this special week of camp. If you know a rising junior or senior in high school with any level of interest in the world of cybersecurity, GenCyber is the place to be next summer.