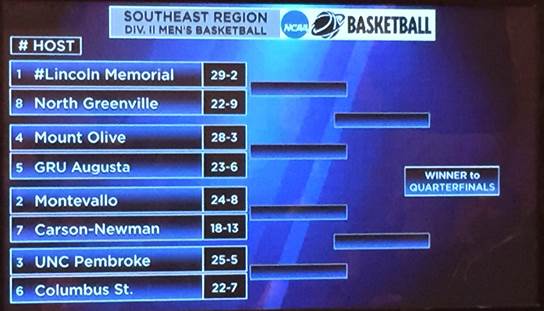 The NCAA announced that the GRU Augusta men’s basketball team earned the fifth seed and will face fourth-seeded Mount Olive in the first round of the NCAA Southeast Regional, hosted by Lincoln Memorial at the B. Frank Turner Arena in Harrogate, Tenn.

The Jaguars (23-6) were ranked fifth in the most recent Southeast Region poll and via a live selection show on NCAA.com, Head Coach Dip Metress and his team were selected with eight other teams to make the postseason.

The Jaguars are 23-6 overall and won 13 of their last 15 games this year. The Mount Olive Trojans went 28-3 this year and 19-1 in the Conference Carolinas.

Last time out against Mount Olive on Nov. 30, 2014, the Jags went down in the opening minutes to the Trojans and never recovered to drop an 82-75 non-conference game for their first loss of the season Sunday afternoon in the Kornegay Arena. FULL RECAP & BOX SCORE

Not a stranger to the postseason after hosting five NCAA Regionals from 2007-2011, the Jaguars reached the regional last year  and beat Anderson in their last first-round regional game on March 15, 2014. Devon Wright-Nelson answered Anderson’s game-tying 3-pointer on a layup with five seconds left to give the GRU Augusta Jaguars an 86-84 win in the opening game for the Jags in the NCAA Southeast Regional in Aiken, S.C.

The Southeast Region tournament champion will advance to the NCAA Division II Elite Eight, which will be held March 25-28 at the Ford Center in Evansville, Ind.

For information on the tournament site – the B. Frank Turner Arena click here