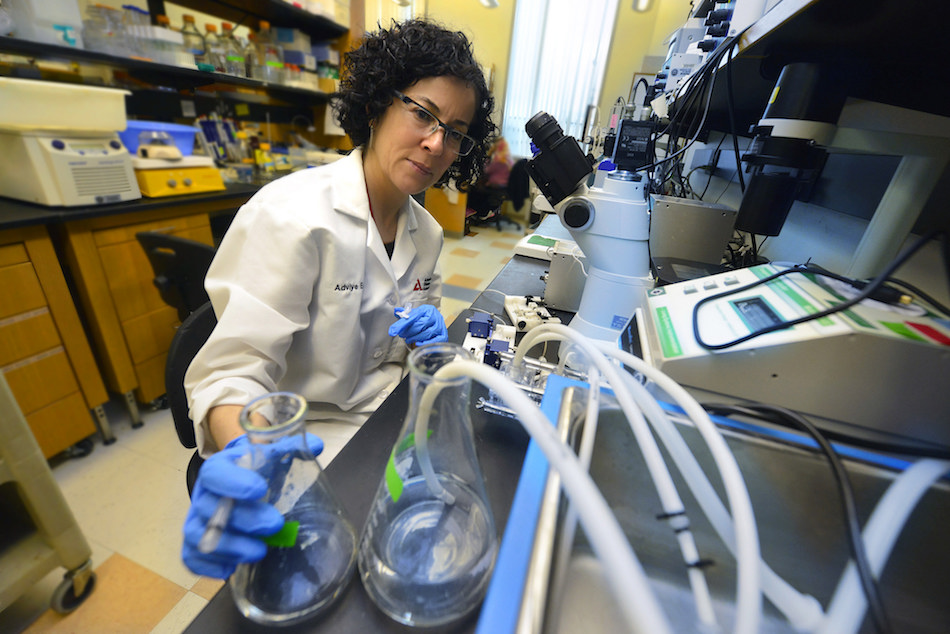 Dr. Adviye Ergul, a vascular physiologist and a prolific stroke researcher at the Medical College of Georgia at Augusta University, has been named a Regents Professor by the University System of Georgia.

Regents Professorships honor full-time faculty at the rank of professor whose exemplary performance has been recognized not only by the institution, but also at regional, national and international levels.

Ergul, who joined MCG in 2000, is a Professor in the MCG Department of Physiology and an associate member of the medical school’s Vascular Biology Center. She also serves as a research career scientist at the Charlie Norwood Veterans Affairs Medical Center.

With more than $4.6 million in current and pending research funding, her work is focused on better understanding the regulation of vascular function and structure in people with diabetes, in hopes of preventing, delaying or reversing diabetes-associated complications like stroke and cognitive impairment.

“Dr. Ergul’s longstanding commitment to scholarship and research have rightly made her widely recognized and respected, both on this campus and around the world and also make her beyond qualified for this honor,” says Dr. Gretchen Caughman, Augusta University Provost and Executive Vice President for Academic Affairs. “Her important research into preventing devastating complications for people with diabetes undoubtedly has and will continue to improve the lives of millions of people with this disease.”

“Dr. Ergul’s innovative research and her reputation as a strong collaborator are a tremendous asset to the Medical College of Georgia and Augusta University,” said Dr. David Hess, interim dean of MCG and interim executive vice president for medical affairs and integration at AU. “We are extremely appreciative of the University System’s recognition of her and her work.”

She is the principal investigator on a five-year $1.1 million RO1 from the National Institutes of Health to study vascular injury and recovery in diabetic ischemic stroke and a Biomedical Laboratory Research and Development Veterans Affairs Merit Review award to examine cerebral arteriole structure and function in diabetic ischemic brain injury. She also is managing the bioinflammation core of a $9.4 million Program Project Grant from the National Heart, Lung and Blood Institute, exploring how the body’s dying cells further fuel chronically high, destructive blood pressure.

“She has certainly made groundbreaking discoveries that will ultimately improve people’s lives, but Dr. Ergul also works hard to inspire the next generation of scientists,” says Dr. Clinton Webb, Herbert Kupperman Chair of Cardiovascular Disease, Regents Professor and Chairman of the MCG Department of Physiology. “In her time at MCG, she has mentored dozens of graduate students who will no doubt go on to make important discoveries of their own.”

Ergul is a fellow of the American Heart Association, serves on its Council on High Blood Pressure Research Leadership Committee and has received its Established Investigator Award. She is a member of the association’s Basic Science Council, Council on Hypertension and Stroke Council, as well as the International Society of Hypertension in Blacks, American Diabetes Association and American Physiological Society.

She serves as a reviewer for the National Institute of Neurological Disorders and Stroke’s Special Emphasis Panel and is a standing member of the Department of Veterans Affairs Merit Review Subcommittee Cardiovascular Disease Panel. She is a member of the Editorial Board of the American Journal of Hypertension and serves as a reviewer for the American Journal of Physiology, Journal of Pharmacology and Experimental Therapeutics, Hypertension, Diabetes, Stroke and Circulation, among others.