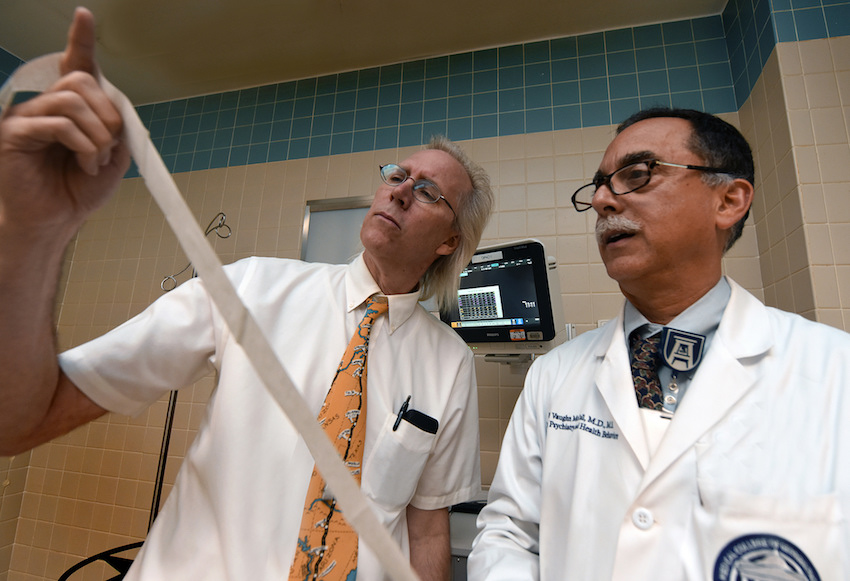 Older people receiving electroconvulsive therapy for their depression likely will need an additional treatment if insomnia is one of their symptoms, researchers report.

“What we can say is that ECT is a powerful antidepressant with a global effect that hits many of the different symptoms of depression but it does not have a specific anti- insomnia effect in older patients,” says Dr. W. Vaughn McCall, chair of the Department of Psychiatry and Health Behavior at the Medical College of Georgia at Augusta University.

“We need to be prepared to separately address the sleep problems in some patients,” recommends the expert in the trifecta of depression, insomnia and suicide and first author of the study in the Journal of Clinical Psychiatry.

Vaughn and his colleagues took a second look at a group of 240 patients age 60 and older who participated in a study looking at the benefits of the usual combination of ECT and the antidepressant venlafaxine for major depression. Patients included in this second review also had insomnia problems categorized as high or low. High levels of insomnia include clinically significant problems with classic symptoms such as difficulty falling asleep and staying asleep, waking up too early and daytime sleepiness, all likely to impact quality of life.

“Our recommendation for ECT should not be based on this having a positive effect on your sleep,” surmises McCall, Case Distinguished University Chair of Psychiatry and Health Behavior.

The researchers note venlafaxine – as well as many other effective modern antidepressants known as selective serotonin reuptake inhibitors – have been reported to actually cause sleep disturbances. In fact, there’s evidence that the increased availability of serotonin these drugs provide while good for depression, may be bad for sleep, McCall says. While serotonin is involved in regulating the sleep/wake cycle, too much of it in the wrong location can be bad for sleep.  “When you take these medications, they get everywhere in the brain and we know that if you promote serotonin in every direction in the brain, that is not good for sleep,” McCall says.

Conversely, the first generation of antidepressants, called tricyclics, were well known for their ability to help patients get a good night’s rest. While many also reduced the natural uptake of serotonin so more would be around longer for the brain to use, these drugs also list drowsiness as a leading side effect because of their antihistamine effect. In fact, antihistamines are a component of many over-the-counter sleep aides.

“With the old antidepressants, the very first symptom they would fix was the sleep problems, long before the patient felt better in any other way… they were sleeping better,” McCall says.

When these circa 1970s drugs began to be replaced by the selective serotonin reuptake inhibitors in the late 1980s, sleep essentially became the last symptom to get better. The difficult tradeoff of the older drugs was about a week’s supply was sufficient for a lethal overdose, whereas the newer drugs, while they often list increased risk of suicidal thoughts as a side effect, are not themselves easy vehicles for committing suicide, he says.

All of the above, and his interest in ECT as a therapeutic tool for some patients, made McCall wonder if an antidepressant therapy that was not a drug would impact sleep.  “The question is: Is ECT more like the older drugs or is more like the newer drugs: Does it have a specific and inherent sleep-promoting effect? The answer appears to be no, at least in this older population.

Five years ago, the research team, led by MCG psychiatry vice chair Dr. Peter Rosenquist, found similar results with magnetic stimulation, another non-pharmacologic method to alleviate depression. In that case, patients were resistant to antidepressants and magnetic stimulation, like ECT, helped with the depression. When they looked again specifically at insomnia in these patients, they found patients’ sleep got better as their depression improved but the treatment did not have an independent effect on insomnia, they reported in the journal Psychiatric Research.

Overall about 3 percent of people are depressed and about 80 percent of those with depression also report problems with insomnia. Whether depression or insomnia come first and if they are distinctive conditions varies, but they are often frequently found together.

There are additional caveats, like younger patients have more depression and less insomnia and that reverses with age.

“We don’t know whether that is really an age effect or a cohort effect,” McCall says of Korean and Vietnam War era individuals, who grew up in a time that may have made them more resilient to depression.

Also younger people who are depressed may actually sleep longer while older people are more likely to complain of insomnia when depressed. “When we get depressed, we tend to not be able to sleep so there is something in older people that looks different than young people,” he says.

ECT is used almost exclusively for depression in the United States and occasionally for mania and schizophrenia, McCall says. Therapy includes a short, controlled burst of electricity to the brain via electrodes placed on the scalp. The electricity alters brain chemistry, which helps some patients feel better within days.  Patients receive an anesthetic and muscle relaxer to help ensure safety and comfort.

When McCall talks with his patients about ECT, he often hears that they feel better overall but are still not sleeping. When his patients clearly have sleep problems, McCall may prescribe one of the older antidepressants at bedtime, like the decades-old trazodone.