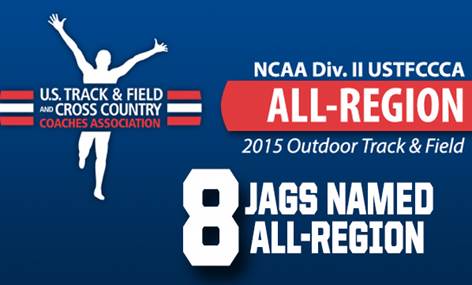 The top five individuals in each event from each region earned the All-Region distinction, in addition to each of the members of the regions’ top three relay teams. The regions used for this award match those used during the cross country season, and student-athletes must come from USTFCCCA member institutions.

The 2015 season will conclude May 21-23 in Allendale, Michigan, at the NCAA Division II Outdoor Championships.

Sabiyah Broderick competed in 29 events in 2015, including 10 at the Peach Belt Conference Championships. Broderick won the javelin throw and the 800m run at the PBC Championships and had 21 top-10 finishes on the year, while setting five personal-best records.

JaVoni Canty logged 17 events this season and had 13 top-10 finishes and 10 top-five places. Canty was named the PBC Field Athlete of the Week on March 11, 2015 for her discus and shot-put performances. Canty posted her best distances in the shot put, discus, and hammer throw all this year.

Angelica Clayton raced in 11 events total in 2015, but she finished in the top five in all of them and top three in nine – sparked by three first-place marks. Her 12.44 time in the 100m race at the Emory Classic gave her a new personal best.

Heather Hammett was named the Female Freshman of the Year at the GRU Augusta Athletics Banquet. Hammett recorded eight first-place finishes in hurdles and the 4×400 relay and finished in the top 10 in 21 of her 22 events. She holds the record for the 100m and 400m hurdles at GRU and she aided the Jags to top-10 finishes in all six regular-season meets.

Jordan Humphrey carded six top-five places in eight of her events on the track this season. In the 10,000m race at the Emory Invitational, Humphrey finished in 38:49.52 for her best finish ever. She placed in the top five in six consecutive meets for her strength in the 10000m, 5000m, and 1500m races.

Christian Collier carded 32 events and set four personal records on the season. Collier notched 28 top-10 finishes and won four events overall – highlighted by a conference championship in the long jump with a distance of 7.29m at the PBC Championships. The jump was Collier’s personal best.

Taylor Coxwell logged an impressive 44 events of competition this season and had five first-place marks; five of them coming consecutively at the PBC Championships for decathlon, 110m hurdles, shot put, discus throw, and long jump. Coxwell set personal records in 10 events and now holds the GRU record in decathlon, javelin, and 100m hurdles.

Dustin Ross earned All-Region honors for both the 800m race and the 1500m race. Ross raced 11 events overall and had seven first-place finishes and set a PBC record for the 800m and 1500m race at the championships. Ross blazed the 1500m run and won the event out of 31 racers in 3:49.78 on Thursday. Ross outkicked the competition to win his second championship in back-to-back style. Ross also won the 800m run in 1:51.24.

Written by Taylor Lamb
Asian-Pacific American Heritage Month showcases diversity through dance, stories, and cuisine
FacebookTwitterPinterestWhatsApp
Leadership Academy to develop leaders from within, at all levels