Carlton Deese has been named executive director of the Georgia War Veterans Nursing Home. He succeeds Charles Esposito, who will retire Oct. 1 after 32 years of service at the nationally recognized skilled nursing facility.

“As executive director Carlton will join our efforts in promoting the tripartite mission of Augusta University at the Georgia War Veterans Nursing Home,” said Brooks Keel. “His leadership and dedication have been evident throughout his time with us, and we are honored to promote one of our own.”

Deese, a licensed nursing home administrator, is currently the associate director at Georgia War, which has served the veteran community for nearly 50 years with a strong emphasis on the individual needs of each veteran. The 192-bed facility, affectionately known as “The Blue Goose,” is owned by the Georgia Department of Veterans Service and operated by Augusta University and its health system.

“Carlton’s commitment and responsiveness to the needs of the veteran residents has been quite impressive,” said Lee Ann Liska, CEO of AU Medical Center. “He has provided excellent support and steadfast guidance as associate director since 2013.

A licensed nursing home administrator, Deese was selected last year as one of the Top 10 in 10 Young Professionals to Watch by the Augusta Metro Chamber of Commerce and Augusta Magazine, and he was named to Georgia Trend magazine’s prestigious 40 under 40 list.

He began his career at Coker College in Hartsville, S.C., where he played baseball and earned a bachelor’s degree in Business Administration. He earned his master’s degree in Healthcare Administration from the Medical University of South Carolina. Deese then completed an administrative fellowship at Charlie Norwood Veterans Affairs Medical Center, where he also served as a health systems specialist in the Director’s Office.  He later served as associate administrator at Heart of Florida Regional Medical Center.

Before joining the team at Georgia War, Deese was administrative business manager for the partnership between East Central Regional Hospital and Augusta University. He is active in several organizations, including the United Way of the CSRA, the American Heart Association, and several veteran service organizations. 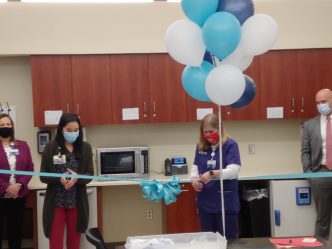