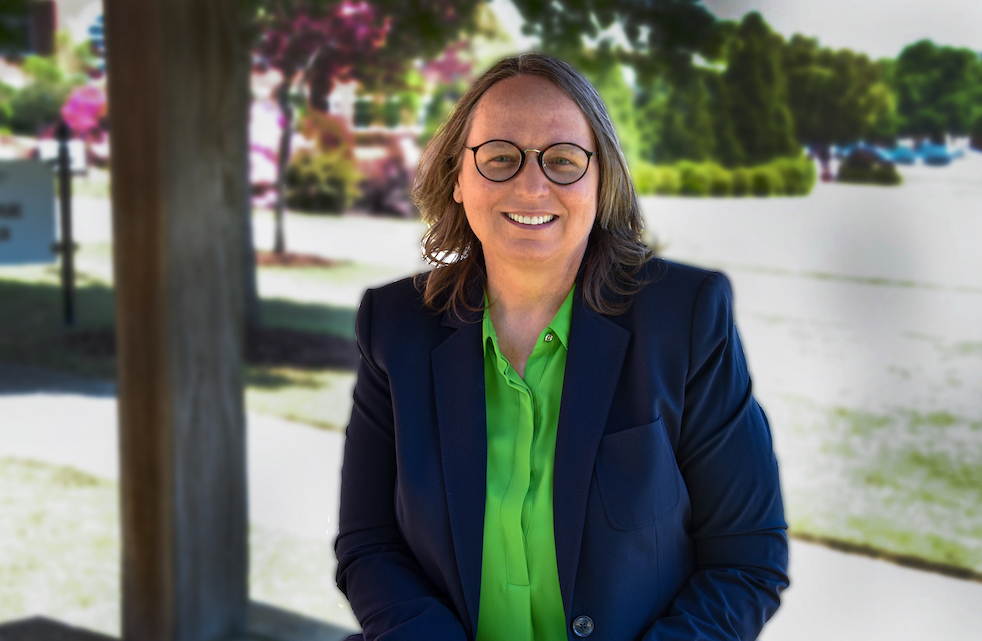 Dr. Kim Davies, who began her academic career at Augusta University in 1996, has been named dean of Pamplin College of Arts, Humanities, and Social Sciences, effective April 15.

“This is truly an honor because I’ve had my whole career here,” Davies said, pointing to a framed picture that hangs in her office at Allgood Hall on the Summerville Campus announcing the university’s first name change. “When I first interviewed here, we were Augusta College. Then, when I arrived on campus in 1996, we were Augusta State University.

“We’ve changed so much since then. I’ve grown with the university and Pamplin College, so I’m extremely excited about this opportunity.”

Davies, who has served as the interim dean since July 1, 2020, is the former chair of the Department of Social Sciences at Pamplin College. Over the course of her tenure, Davies was named Outstanding Faculty Member in 2001 and received the Louis K. Bell Alumni Research Award in recognition of outstanding contributions in the areas of research and publication by a university faculty member in 2009. She also received the leadership award, Caught in the Act of Representing Values of Georgia Regents University, in 2015.

Dr. Neil J. MacKinnon, provost and executive vice president for academic affairs at Augusta University, said Davies was the clear choice to lead Pamplin College into the future because of her wealth of experience and institutional knowledge at the university.

“Dr. Davies appreciates and understands the rich history of the Pamplin College of Arts, Humanities, and Social Sciences, and she has excelled in the interim dean role over the past few months,” MacKinnon said. “She has a strong track record of supporting program growth, hiring and mentoring new faculty, promoting research, scholarly work and the creative arts.

“She is well-respected by her fellow deans on the Deans’ Council and is a collaborative leader. I’m looking forward to working with her to continue to elevate Pamplin College.”

Davies, who earned her bachelor’s, master’s and doctoral degrees from The Ohio State University, said she has always felt at home at Augusta University.

“Coming from a big university like Ohio State, I remember a faculty member there once told me, ‘Don’t love your university because they won’t love you back,’” Davies said, laughing. “Well, I love Augusta University. I love the people and I have great colleagues in Pamplin College and around the university as a whole.  And the students have been fantastic. I feel really at home here.”

The faculty members in each department in Pamplin College are dedicated to their scholarship, teaching, and they are great mentors to their students throughout their college careers, Davies said.

“They really care about teaching and they are kind to one another and do things for one another. It is wonderful to have that kind of support,” Davies said. “And the students have been great. I think we are very fortunate to have a student population that is very diverse. It’s one of the things that attracted me to Augusta University and it’s helped to keep me here.”

The student population at Augusta University is not only racially diverse, but the students come from different socioeconomic backgrounds, she said.

“As a sociologist, the diversity of our students has made teaching sociology much more interesting and it makes for a richer culture on campus,” Davies said, adding that one of the most exciting and challenging aspects of being dean of Pamplin is also the college’s diverse curriculum. “I came in here with experience in the social sciences, which is diverse in itself, but then also heading programs like music and art has really been a rewarding experience.”

As dean of Pamplin College, Davies said she feels even more connected to the entire university and everything it has to offer.

“In the past, I’ve always enjoyed going to the theater and seeing musical events at Augusta University, but, now, it’s part of my job and I love it,” Davies said. “It’s just a fantastic opportunity to get to know everybody a little bit better.”

Over the next few years, Davies said she expects to see Pamplin College continue to grow and create graduate programs throughout the college.

“I think we have opportunities for growth in all of our departments and the ability to add and strengthen our programs,” she said. “For example, our Master of Arts in Intelligence and Security Studies (MAISS) program is rapidly growing and that could be our next doctoral program in this college. It’s a very strong program that can attract people from across the United States.”

About two years ago, the Department of Art and Design also launched a new Bachelor of Fine Arts degree with a concentration in animation that has been extremely popular, Davies said.

“Animation is bringing in people from all over the country,” Davies said. “We actually get people who apply to our animation program and then ask, ‘Where is Augusta?’ So, animation is definitely a place of growth, as well as graphic design.”

The new Health, Society, and Policy degree from the Department of Social Sciences is also preparing students for a career in the human service fields within the health industry, Davies said.

“And our Integrated Studies is a program that I believe should continue to grow,” Davies said.  “That might even be a place where we could consider graduate programs in the future, because a lot of the strength in Pamplin is with interdisciplinary and multidisciplinary programs.”

Davies said she is excited about what the future holds at Pamplin College.

“When I started here, I was 31. Now, I’m 55,” Davies said, smiling. “The university has changed so much. Just Summerville itself looks so different and the faculty expectations are much different. But I have a real sense of where we were, why some people came here and why we stayed. And I know that there are really wonderful opportunities for faculty and students here at Augusta University.”

Written by Stacey Eidson
Moment of silence will observe those lost the past year
FacebookTwitterPinterestWhatsApp
JagNation’s Allise Riney: ‘The care here at AU Health is genuine’