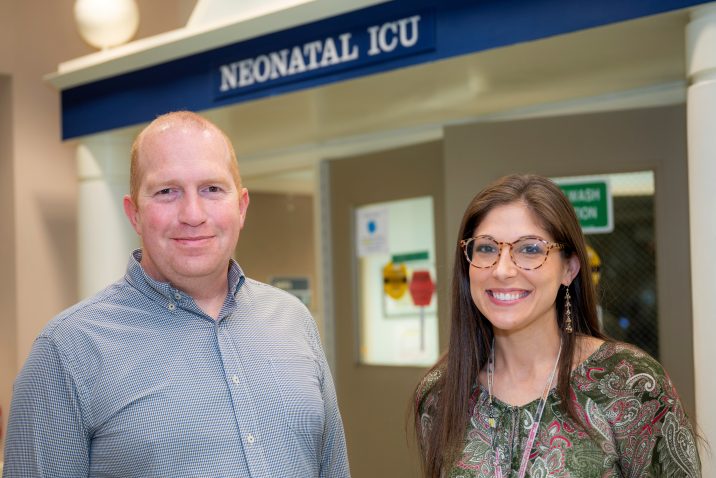 Their assessment of nearly 250 newborns placed on ECMO because of respiratory failure over 17 years indicates that when breathing, not heart function, is the problem, the safest path is a single cannula in the right internal jugular that can remove oxygen-poor blood from the baby, run it through the ECMO circuit to clean it and add oxygen, then put it back into the baby at the same site, according to ECMO team members at Children’s Hospital of Georgia and the Medical College of Georgia.

The findings are being presented during the Southern Society for Pediatric Research meeting Feb. 13-15 in New Orleans.

The dual access veno-arterial approach just incurs greater risk, says Dr. Jessica Gancar, neonatology fellow at MCG and CHOG, for reasons like it  does not enable clot filtering, which increases the risk for brain bleeds and strokes. “You also are putting a big IV in a major artery and that comes with unwanted risk because ultimately the natural function for that artery is to supply oxygenated blood to your brain,” Stansfield says.

They looked at 244 newborns placed on ECMO for respiratory failure from 2002-19 at CHOG, the pediatric teaching hospital for MCG, Georgia’s public medical school. They looked at the babies’ demographics and medical records to determine which cannula approach was used, as well as outcome and predicted mortality risk based on a risk assessment for babies requiring ECMO called Neo-RESCUERS.

The group had a 93% overall survival and 71% of the babies had a single cannula placed in the right internal jugular in an approach called veno-venus. The right internal jugular is the largest vein in the neck and collects oxygen poor blood from the head and neck, including the brain. The cannula pulls the oxygen-poor blood right before it goes into the heart, runs it through the ECMO circuit which replenishes the oxygen as the lungs normally would, then puts the now oxygen-rich blood back into the same cannula and vein so it can resume its normal path to the heart, which ultimately pumps the blood back out to the head and neck.

“We take the blood out, we put all the oxygen back into it, then through the same cannula we put it right back in so it goes directly to the heart,” Stansfield says. “Veno-venous requires that the heart function normally. “

The remainder of the newborns had two cannulas placed, with the second in the right common carotid artery, which runs essentially parallel to the right internal jugular. This veno-arterial approach bypasses both the heart and lungs and directly puts oxygen-rich blood back into the arterial system to supply the head and neck with oxygenated blood.

They found the mortality rate for babies in respiratory failure put on ECMO with the veno-arterial approach was 17% versus 2.7% with veno-venus. They also found that the total hours spent on ECMO was not directly associated with mortality risk.

But the national trend for putting newborns in respiratory failure on ECMO is to use veno-arterial about 80% of the time, even when heart function is sound, a trend the ECMO team at MCG and CHOG doesn’t follow or understand.

“We believe that seems to be overkill because if you can use the baby’s heart, why would you not?” Stansfield says.

In Augusta, the team basically does the exact opposite; in fact, they continue to whittle away at the percentages of babies on whom they use the veno-arterial approach, reserving it, for example, when they have concerns that a baby’s heart function cannot sustain the baby on ECMO.

Gancar, one of the next generation of neonatologists, hopes the message to her colleagues across the nation is to opt for veno-venous ECMO when heart function is good to eliminate some mortality risk and have better outcomes.

They note there are technical reasons that can make veno-arterial ECMO appear to be a better choice, including positioning of the veno-venous cannula and because babies with veno-venous require more intense monitoring along with accepting the fact that their blood oxygen levels may not be quite as high while they are on ECMO because of the more circuitous route for the blood.

The veno-arterial approach also means that both the vein and artery will no longer function after the baby comes off ECMO, unless the decision is made to have an additional procedure to repair the carotid. The short- and long-term impact of sacrificing a carotid artery on the brain was a significant concern in the early days of ECMO in the 1970s, and those concerns are not completely resolved although some studies have shown brain lesions in babies with veno-arterial placement and others have associated this dual placement with seizure activity.

“We are trying to provoke our colleagues to think more critically about their choices,” Stansfield says, and the ECMO team in Augusta to continue to do the same.

The ECMO center at MCG and CHOG was established in 1985 as the first program in the Southeast and one of the first half dozen in the nation. Since those early days many refinements have been made including fewer babies requiring ECMO because of expanded alternatives like vastly improved ventilator support and use of the gas nitric oxide to dilate the lungs and blood vessels.

Once a decision is made by the neonatology team that the child needs ECMO to enable recovery, they call the pediatric surgeons and together the physicians decide which cannulation approach to use, Gancar says.