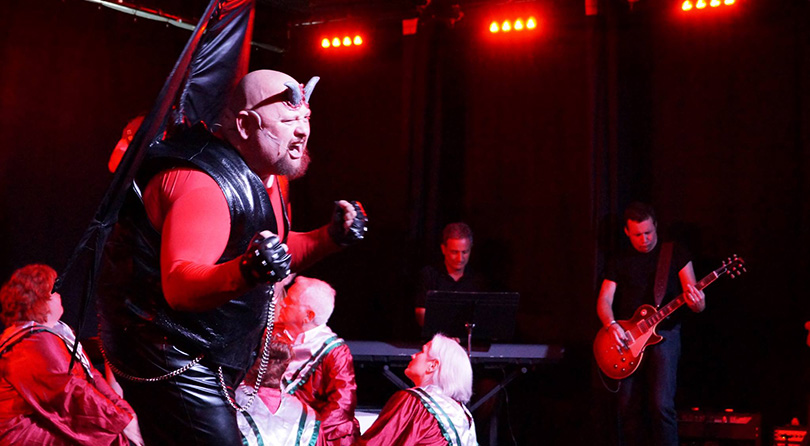 Augusta University will host a concert performance of Mark Swanson’s (BA ’93) hit musical Misconception: The Lost Gospel of Christmas on Monday, May 30, at 7:30 p.m. at the Maxwell Theatre.

In lieu of ticket sales, donations will be accepted at the door to help support the production of Swanson’s second musical, A Scythe of Time at the New York Musical Festival in July.

Founded in 2004, the New York Musical Festival has become widely recognized as the “Sundance” of musical theatre. To date, more than 350 shows have premiered at the festival, featuring more than 8,000 artists. After having their shows performed, several NYMF alums have moved on to even greater glories, including Tony Awards and a Pulitzer Prize.

Described as a mix of Jesus Christ Superstar and The Rocky Horror Show, “Misconception” offers a lighthearted, somewhat irreverent retelling of the birth of Christ. Made complete by a stellar cast of Augustan actors, a trio of “non-traditional” wise men and one leather-clad biker devil, Misconception is a show you can’t afford to miss.

Swanson, along with renowned playwright Alan Harris and the entire A Scythe of Time cast and crew, is working around the clock to raise funds for their NYMF production. Their current goal is roughly $94,000, a total which includes the cost of travel, production and professional actor fees.

“We’re getting closer,” Swanson said. “I’m humbled by the amount of support we’ve received already, and every little bit helps.”

The suggested donation at the door is $50, but any amount is welcome.

This event is sponsored by the Katherine Reese Pamplin College of Arts, Humanities, and Social Sciences.

For more information about this event or to make a donation online, visit ascytheoftime.com.