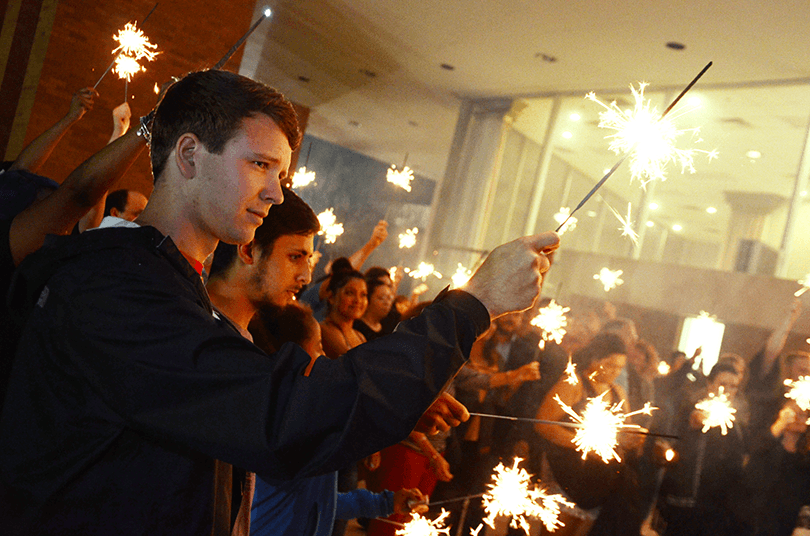 Over 100 friends, faculty and family members gathered at the Maxwell Theatre on Monday night to celebrate the life of Rowan Feldhaus, an Augusta University student who died on May 16 at 25.

Speakers at the student-organized ceremony spoke of what an inspiration Feldhaus was and how influential he was to those who knew him.

“Rowan was a remarkable individual, and he inspired everybody who was around him,” said Dr. Craig Albert, who as program director of Augusta University’s Model United Nations program worked closely with Feldhaus, who held several roles during his five years in the program, including honorary faculty advisor. “Rowan helped me become a better teacher, and by being a better teacher, helped me become a better person.”

Feldhaus, a transgendered student who made national headlines for his lengthy legal battle to change his name, was remembered as an active presence on campus, serving many roles in the Undergraduate Student Government Association (SGA), overseeing the planting of a descendant of the university’s historic Arsenal Oak and working as a student assistant in the Study Abroad office. He was applauded for his generous spirit and for embodying the qualities of a leader: honesty, integrity, the ability to inspire and the ability to be empathetic.

“There aren’t many people who have even a couple of those qualities, but Rowan had them all” student Daniel Hill said in announcing the work being done to create a leadership scholarship in his name.

The emotional event concluded on the Maxwell’s patio, where those in attendance raised sparklers and Harry Potter wands in remembrance of Feldhaus, who was a fan of the Harry Potter series.