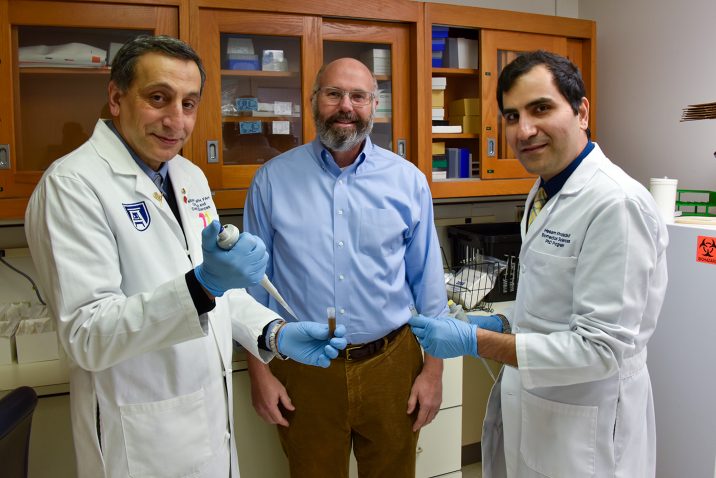 A two-week course of high doses of CBD helps restore the function of two proteins key to reducing the accumulation of beta-amyloid plaque, a hallmark of Alzheimer’s disease, and improves cognition in an experimental model of early onset familial Alzheimer’s, investigators report.

The proteins TREM2 and IL-33 are important to the ability of the brain’s immune cells to literally consume dead cells and other debris like the beta-amyloid plaque that piles up in patients’ brains, and levels of both are decreased in Alzheimer’s.

The investigators report for the first time that CBD normalizes levels and function, improving cognition as it also reduces levels of the immune protein IL-6, which is associated with the high inflammation levels found in Alzheimer’s, says Dr. Babak Baban, immunologist and associate dean for research in the Dental College of Georgia and the study’s corresponding author.

There is a dire need for novel therapies to improve outcomes for patients with this condition, which is considered one of the fastest-growing health threats in the United States, DCG and Medical College of Georgia investigators write in the Journal of Alzheimer’s Disease.

“Right now we have two classes of drugs to treat Alzheimer’s,” says Dr. John Morgan, neurologist and director of the Movement and Memory Disorder Programs in the MCG Department of Neurology. One class increases levels of the neurotransmitter acetylcholine, which also are decreased in Alzheimer’s, and another works through the NMDA receptors involved in communication between neurons and important to memory. “But we have nothing that gets to the pathophysiology of the disease,” says Morgan, a study coauthor.

The DCG and MCG investigators decided to look at CBD’s ability to address some of the key brain systems that go awry in Alzheimer’s.

They found CBD appears to normalize levels of IL-33, a protein whose highest expression in humans is normally in the brain, where it helps sound the alarm that there is an invader like the beta-amyloid accumulation. There is emerging evidence of its role as a regulatory protein as well, whose function of either turning up or down the immune response depends on the environment, Baban says. In Alzheimer’s, that includes turning down inflammation and trying to restore balance to the immune system, he says.

That up and down expression in health and disease could make IL-33 both a good biomarker and treatment target for disease, the investigators say.

CBD also improved expression of triggering receptor expressed on myeloid cells 2, or TREM2, which is found on the cell surface where it combines with another protein to transmit signals that activate cells, including immune cells. In the brain, its expression is on the microglial cells, a special population of immune cells found only in the brain where they are key to eliminating invaders like a virus and irrevocably damaged neurons.

Low levels of TREM2 and rare variations in TREM2 are associated with Alzheimer’s, and in their mouse model TREM2 and IL-33 were both low.

Both are essential to a natural, ongoing housekeeping process in the brain called phagocytosis, in which microglial cells regularly consume beta amyloid, which is regularly produced in the brain, the result of the breakdown of amyloid-beta precursor protein, which is important to the synapses, or connection points, between neurons, and which the plaque interrupts.

CBD’s impact on brain function in the mouse model of early onset Alzheimer’s was assessed by methods like the ability to differentiate between a familiar item and a new one, as well as observing the rodents’ movement.

People with Alzheimer’s may experience movement problems like stiffness and an impaired gait, says Dr. Hesam Khodadadi, a graduate student working in Baban’s lab. Mice with the disease run in an endless tight circle, behavior which stopped with CBD treatment, says Khodadadi, the study’s first author.

Next steps include determining optimal doses and giving CBD earlier in the disease process. The compound was given in the late stages for the published study, and now the investigators are using it at the first signs of cognitive decline, Khodadadi says. They also are exploring delivery systems including the use of an inhaler that should help deliver the CBD more directly to the brain. For the published studies, CBD was put into the belly of the mice every other day for two weeks.

A company has developed both animal and human inhalers for the investigators who also have been exploring CBD’s effect on adult respiratory distress syndrome, or ARDS, a buildup of fluid in the lungs that is a major and deadly complication of COVID-19, as well as other serious illnesses like sepsis and major trauma. The CBD doses used for the Alzheimer’s study were the same the investigators successfully used to reduce the “cytokine storm” of ARDS, which can irrevocably damage the lungs.

Familial disease is an inherited version of Alzheimer’s in which symptoms typically surface in the 30s and 40s and occurs in about 10-15% of patients.

CBD should be at least equally effective in the more common, nonfamilial type Alzheimer’s, which likely have more targets for CBD, Baban notes. They already are looking at its potential in a model of this more common type and moving forward to establish a clinical trial.

Plaques as well as neurofibrillary tangles, a collection of the protein tau inside neurons, are the main components of Alzheimer’s, Morgan says. Beta-amyloid generally appears in the brain 15-20 years or more before dementia, he says, and the appearance of tau tangles, which can occur up to 10 years afterward, correlates with the onset of dementia. There is some interplay between beta amyloid and tau that decrease the dysfunction of each, Morgan notes.

The Food and Drug Administration is scheduled to make a ruling by early June on a new drug aducanumab, which would be the first to attack and help clear beta amyloid, Morgan says.

Other coauthors include Drs. David Hess, neurologist and MCG dean, and MCG neuroscientists Kumar Vaibhav and Krishnan Dhandapani. The research was supported by the National Institutes of Health.