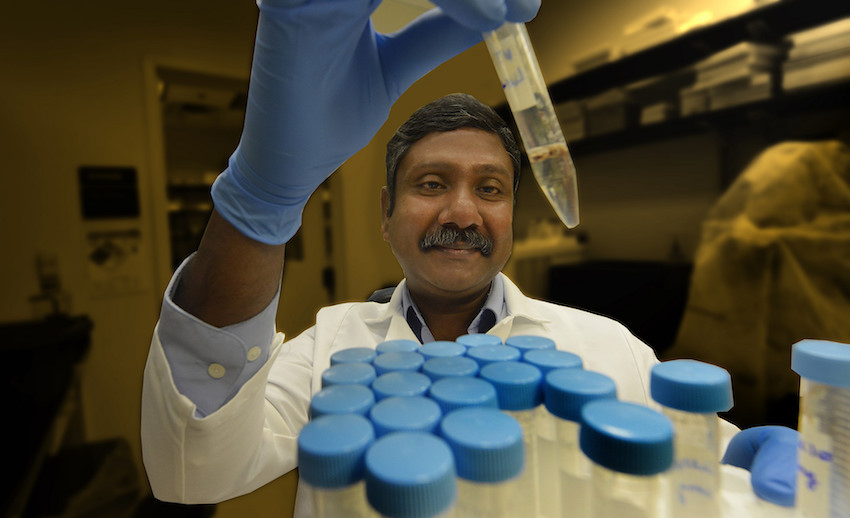 AUGUSTA, Ga. – A class of drugs used increasingly to help fight cancer may have the additional benefit of protecting the kidneys when packaged with the powerful chemotherapy agent cisplatin.

The nearly 40-year-old cisplatin can be a strong opponent against aggressive cancers, such as head and neck, ovarian and lung cancers.

But in more than 10 percent of patients, the drug, given intravenously for typically a handful of days, can also take a quick and potentially deadly toll on the kidneys, said Dr. Ganesan Ramesh, kidney pathologist at the Vascular Biology Center at the Medical College of Georgia at Augusta University and at the university’s Cancer Center.

Ramesh and his colleagues have new laboratory evidence that histone deacetylase inhibitors, or HDAC inhibitors, can eliminate 80-90 percent of that kidney toxicity.

“Cisplatin is a very effective drug, and we don’t want to stop using it,” said Ramesh, corresponding author of the study in the journal Kidney International. “We want to reduce its toxicity to the normal tissue.”

The super-busy kidneys filter the entire blood volume of the body every 20 minutes. A big part of their job is removing toxins for elimination in the urine and pushing back into the body valuables such as glucose and nutrients. The major problem with cisplatin is it can get stuck in the kidneys, where the platinum metal compounds the drug releases to kill a tumor can do serious harm. Inside the kidneys, the malingerer stimulates inflammation, DNA damage, free-radical production and cell death.

Histones are the protein spools DNA wraps around, and histone deacetylase enables DNA to be wound tightly and regulates gene expression and protein function. One way HDAC inhibitors help fight cancer is by temporarily loosening DNA, increasing the expression of tumor-suppressing genes and making the tumor more vulnerable. Evidence that HDAC inhibitors also can protect kidneys following injury, led Ramesh to reason it was logical to pair these drugs with cisplatin.

Inside the kidneys, the researchers found HDAC inhibitors suppress inflammation and subsequent cell death. “You basically cut down the level of inflammation, which reduces the toxicity,” Ramesh said.

They found at least one way HDAC inhibitors do this is by inducing a small anti-inflammatory molecule with a big name, AMWAP, or activated microglia/macrophage WAP domain protein.

In fact, when they just infused AMWAP with cisplatin, the kidneys were still protected. The AMWAP effect is a new finding about how HDAC inhibitors work, Ramesh said, and needs further study. But they suspect that HDAC typically silences potentially helpful AMWAP.

Preclinical next steps include also using their combination therapy in mice with grafts of human tumors, which are typically targeted by cisplatin.

Currently, physicians try to reduce cisplatin’s negative impact by also giving a lot of intravenous fluids to help keep the drug from building up in the kidneys. At the first sign of kidney toxicity, patients may be taken off their cancer therapy to give their kidneys the opportunity to recover before resuming cancer treatment.

The research was supported by the National Institute of Diabetes and Digestive and Kidney Diseases.