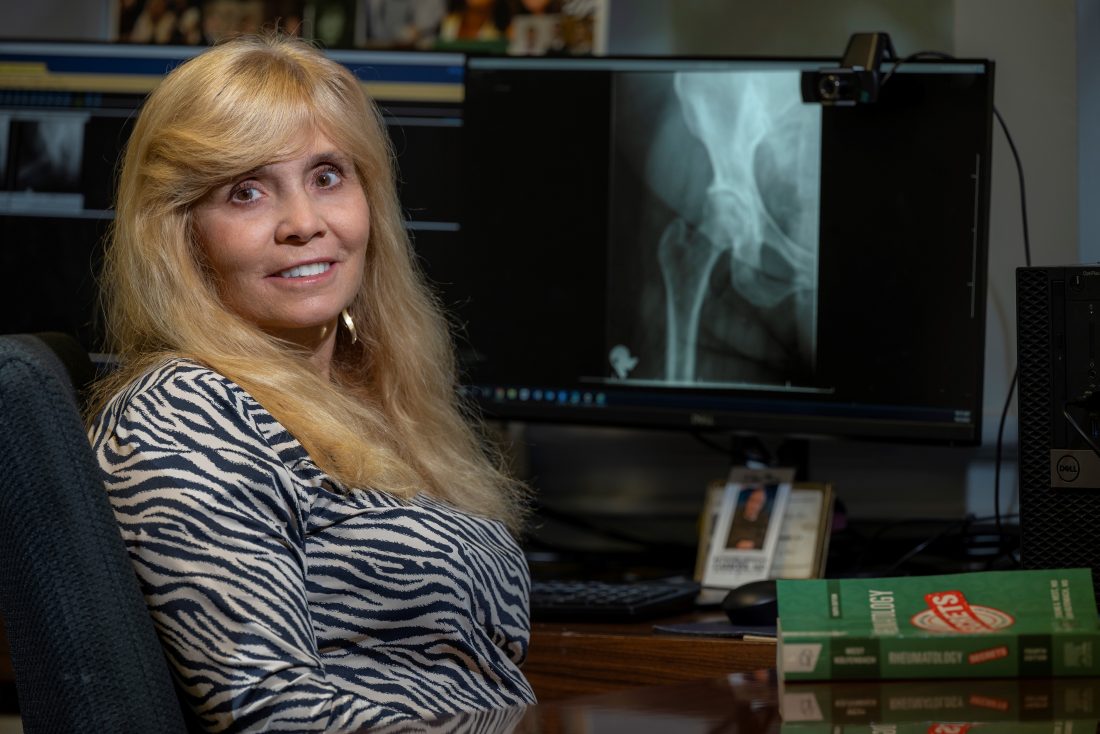 Osteoporosis is a major, worsening public health problem, and bisphosphonates, which help restore a healthier balance of bone production and resorption, have been a relatively inexpensive, successful treatment, particularly for those at highest risk for fractures.

But even as the population ages, the drugs’ use has been trending down amid patient concerns about rare but potentially serious side effects linking their long-term use to unusual fractures of the femur or thigh bone, the biggest bone in the body, and an even more rare jawbone loss called osteonecrosis.

Investigators have launched a five-year, $5.7 million study funded by the National Institutes of Health (1R01AG079118-01) to objectively analyze big, diverse datasets of males and females who have been using these drugs to objectively assess the risk and benefit of continuing to take bisphosphonates versus taking so-called drug holidays, which can stretch out for years, in an effort to avoid the rare side effects.

Their bottom line will be developing a risk calculator called CLUB — calculator for length of use of bisphosphonates — that a physician can use to help an individual patient determine how best to proceed.

“The calculator will be designed so a physician can sit down with their patient and say: In the next X number of years you have X chance of an osteoporotic hip fracture based on everything we know about you, and this is your risk for an atypical femoral fracture,” says Laura Carbone, MD, an osteoporosis expert who is chief of the Division of Rheumatology at the Medical College of Georgia and principal investigator on the new grant.

“Right now, we are having these discussions all the time, even as the risk associated with drug holidays remains uncertain with emerging reports of women sustaining osteoporotic fractures during these holidays,” Carbone says.

Osteoporosis is the major cause of fractures — most commonly in the hip and vertebra in the spine and wrist — most often in white and Asian postmenopausal women and older men, according to the National Institute of Arthritis and Musculoskeletal and Skin Diseases. A broken bone may be the first clear indicator of the problem.

“It used to be said that if you had osteoporosis, you were on these drugs for life,” Carbone says of bisphosphonates, which can cut your fracture risk in half and up to 90% if you’ve already had a fracture. “They work, but they don’t work in everyone,” she says.

However, even the small possibility that the drugs you are taking to strengthen bone could lead to fractures and bone loss is tough to digest, she adds, and impossible to ignore.

Bisphosphonates were first approved by the Food and Drug Administration in 1995 to help keep bone strong, but the FDA and other professional groups have since developed guidelines suggesting that after three years of taking the intravenous version and five years of taking the oral version, fracture risk be reassessed to see if a drug holiday can help patients avoid the rare, but serious risks associated with the drugs’ long-term use.

“We want to provide more individual evidence of your risk, not a population’s risk,” Carbone says, noting that most information out there on the impact of long-term treatment was found in mostly white, healthy females who live independently, demographics that don’t necessarily reflect the population taking the drugs.

The new study will first examine relevant data on about a half million females and males from diverse races and ethnicities who live both independently and in long-term care facilities available from Kaiser Permanente, HealthPartners and the Veterans Health Administration.

The 2018 National Institutes of Health Pathways to Prevention Workshop looked at available evidence of long-term use of the drugs to identify research gaps and needs for advancing the field. Carbone and her colleagues will use the data they find to address those identified gaps, including looking specifically at those with so-called comorbid conditions, which are concurrent health problems like diabetes and high blood pressure in addition to their osteoporosis, as well as the impact of fractures.

They are looking at details like how long patients took the drugs, if they took drug holidays and if they experienced any fractures and what type.

When they identify long gaps of not taking the drug, they are going to look for physician notes on conversations about a drug holiday, and whether those were initiated by the physician or the patient.

Then, a multidisciplinary team that includes consumers will use this data to develop a risk factor calculator that will determine if an individual patient would benefit from a drug holiday and for how long, or if, like the current statistics indicate, stopping the medication likely will quickly put them back at risk for a fracture, Carbone says.

Much like calculating your 10-year-risk for heart disease, there already is something called FRAX, or Fracture Risk Assessment Tool, that helps physicians objectively assess your 10-year fracture risk. The National Osteoporosis Foundation Guide, for example, says postmenopausal women and men age 50 and older with a 3% or greater risk of a hip fracture or 20% or greater risk in the next 10 years for a major osteoporotic fracture should be considered for some kind of osteoporosis treatment based on FRAX.

CLUB should provide that sort of objective risk assessment for those already taking the drug, Carbone says. “Based on the data we will be analyzing, our expert panel is going to decide whether you should benefit from a drug holiday based on your risk of an atypical femoral fracture versus your risk of an osteoporotic fracture,” Carbone says. “This will literally be a calculator where you put in all the variables and it will give you those two numbers.”

Atypical breaks in the femur are clearly tied to long-term use of bisphosphonates and are considered atypical because they relate more to the fragility of the usually strong bone as opposed to more typical breaks that might happen, for example, with extreme force in a car wreck.

The other concern, which Carbone says seems to be even bigger for patients, is osteonecrosis of the jaw, a painful, tough-to-treat condition in which a portion of the jawbone dies. Carbone notes this is a particularly rare consequence which is slightly more frequent in patients taking bisphosphonates for multiple myeloma because they are taking much higher doses.

While the association between the jawbone problems and long-term use of bisphosphonates is not as clear as with atypical femur fractures, the experts will also be looking closer at the relationship based on their data to see if there is objective cause for concern, Carbone says.

The drugs generally work by helping restore a younger version of how bone turns over. Cells called osteoblasts make bone and osteoclasts help degrade and resorb bone with the idea of keeping bone strong. But with age, the balance shifts and bisphosphonates help slow the bone-consuming osteoblasts down.

Carbone does not question that the long-term use of these drugs can lead to atypical femur fractures, because in certain people after a while the drugs actually shut down rather than augment the healthy balance that most of us are fortunate to have in our youth, Carbone says. Within the first year after you stop taking the drugs, the risk of these atypical fractures declines about 70%. She emphasizes “certain people” because she does not think, and there is evidence from the large numbers of people who took the drug safely for a long time, that not everyone is at risk.

The other reality is that as soon as people who need the drug stop taking it, many will experience a fracture, like the common and potentially debilitating hip fracture, they were working to avoid.

“You can die from fractures and you can also lose your independence,” Carbone says. Hip fractures, for example, are one of the most difficult to recover from; Most are caused by falls and the risk goes up with age and osteoporosis. More men than women die from hip fractures, Carbone says, potentially because they tend to have a higher number of those comorbid conditions.

Most hip fractures occur in people older than age 60 and the risk doubles each decade after age 50. The range of risk factors includes excessive alcohol intake, cigarette smoking and vision problems.

Being a white or Asian female is a significant risk factor, along with earlier onset of menopause and related earlier loss of higher estrogen levels, as well as reductions in testosterone that men tend to experience about age 50.

Carbone, who also specializes in Paget’s disease, another condition in which the healthy balance of bone turnover is lost, regularly prescribes bisphosphonates, but only to those considered at a higher risk, which would include already having low bone density and having other risks like being Asian and postmenopausal. Already having had a fracture and growing older are two of the biggest risk factors for osteoporosis, Carbone notes.

A 2020 study in the JAMA Network reported that after five years of treatment, five more years was not associated with a reduction in hip fractures compared to those who stopped and recommended further study. However, if women just continued for two years then stopped, the risk appeared lower than if continuing for five more years.

While exercise is good for our overall health and does help build bone when you are younger, Carbone says, with age it helps more with avoiding falls and strengthening the muscle, which supports bone, she says. 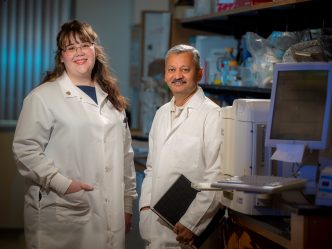 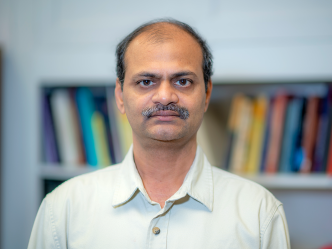