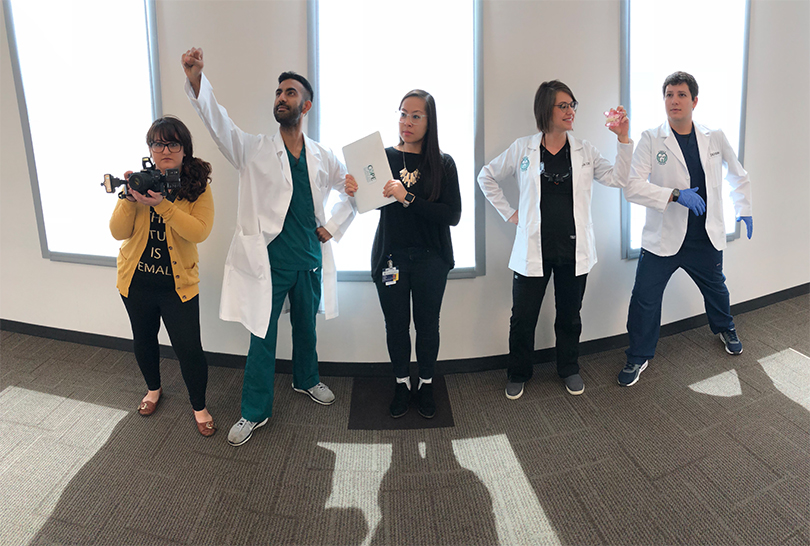 They may not be the heroes helping save the galaxy from alien supervillains, but five students at The Dental College of Georgia have their own evil to fight. They have the powers needed to show cancer patients how to protect their mouths from the dangerous side effects of radiation and chemotherapy.

“Some of our classmates call us The Avengers,” said Zach Dubin, co-founder of Comprehensive Oral Health Promotion and Education (COPE) with Cancer. “I guess it makes sense, seeing as how we all have different skills that we bring to this group.”

Nadia Heidari has put her filmmaking skills to work to produce the student organization’s newest educational video. It comes almost one year since COPE with Cancer’s founders started the organization and produced their first video. At last check, it has accumulated over 10,000 views.

“With our second video, we wanted to turn the information we’ve gathered for written brochures into a visual medium,” Heidari said. “People love watching videos, so we thought that would be a helpful tool in our education campaign.”

The video illustrates ways to handle oral complications before, during and after cancer treatment. It is designed to show cancer patients how to handle those side effects from chemotherapy and radiation that can affect the mouth. Dubin, who lost his aunt to cancer, said the kind of information contained in the video could help the next family who has to help a loved one diagnosed with cancer.

“When I was taking care of my aunt, no one knew what questions to ask about her oral health,” he said. “A cancer patient is so focused on the 150 other things being affected by their diagnosis that they’re not stopping to ask their doctor why their mouth hurts.”

Dahlia Levine, another co-founder of the group, said a cancer patient’s oral health could affect other areas of an oncologist’s treatment plan.

“If you’re having complications, you may not be eating right, Levine said. “Dietary problems can lead to malnourishment, which can cause doctors to postpone chemo or radiation until a patient builds their strength back.”

In the nine months since they produced their first video, the COPE with Cancer team has presented information to support groups and an education conference filled with dentists from across the globe.

“It was the second time we took part at a gathering of the American Academy of Oral Medicine,” said Varun Iyer, one of the five co-founders of the group. “People from different parts of the world came up to us and mentioned they had seen our video. It was a very humbling experience to know we are making a difference.”

Levine, Iyer and Diana Tran graduate in May. They said that does not mean their role in COPE with Cancer will change. They said when they started the student organization it was always for the long-term.

“We knew we wanted to educate the next generation of dental professionals, ourselves included,” Levine said. “We can take the things we’ve learned to the practice we work at to make sure our patients get the information and care they need.”

“We all made a vow that we would stick to this because it’s our baby,” Tran said. “It’s like our dental school identity.”

For now, these superheroes, who wear lab coats instead of capes, are assembling to finish their third video, which should be released by the end of March. It is another tool the team will use in their fight to protect patients from the effects of cancer.