Augusta University’s men’s and women’s basketball teams had quite a year.

First, practice for the 2020-21 season was delayed until November, then an abbreviated schedule was approved where they would play a limited number of non-conferences in December before focusing on the Peach Belt Conference.

Games were won and lost, postponed or canceled, and one program opted out of the season. The stress coaches Dip Metress and Millette Green and their players endured was unprecedented.

“This year was unpredictable … I was uncertain about each game until the ball went up at tip,” said Green, women’s basketball head coach. “My focus was to take it day by day and control what I could control.”

Metress, mens’ basketball head coach, said a day never went by when the word COVID or testing came up in conversation and also commended his players for controlling what they could control.

“All in all, we had five players that had to sit out for three months all at different times and it made for a challenging year,” he said. “Of them, two were starters and two other players, we were expecting to play big roles this year.

Green’s squad missed 10 games after Christmas break, including all eight league games in January. She said the team met to decide if they wanted to continue despite missing 45 days of practice and competition.

“When they gave me the word, I refocused and got back to business,” said Green, whose team went 6-8 overall and 5-5 in the conference. “In preparation for our return to play, we emphasized competing, defending and rebounding until we got our offensive rhythm flowing. … Over the course of 25 days, we played 10 games with maybe three full practices.”

Green mentioned they spent more time in the film room watching and learning rather than practicing on the court to keep their legs fresh.

“I am proud of what my players accomplished with minimal on-the-court preparation,” she said. “It shows the experience and growth in our team from last year. Going into next season, all our trials and tribulations will make us a better team as we compete for a championship.”

The men’s program went 9-7 overall and 7-6 in conference play and just missed the playoffs, which was shortened to four teams.

Senior guard Shawn Moss played in 14 of the Jaguars’ 16 games, averaging close to 20 minutes and 7.4 points per game. He said it’s always tough not ending a season with a championship, but with the season this team had, he focused on being the best teammate he could be.

“I just tried my best to make sure guys were doing what they needed to do in school and get in the gym as much as possible,” Moss said. “With breaks in the schedule, very often there’s a lot of times we had off days because the game was canceled … I would always grab a few of the guys and go to the gym and get shots up to stay ready.”

Senior guard Jerod Carrier said it was frustrating at times not having a concrete schedule and missing out on the opportunity to have a full schedule, but he was glad they were able to start and finish the season together.

“I understand that many teams were not blessed with the opportunity to play and I’m glad we were able to get it done with everything going on,” said Carrier, who played in nine games while battling injuries. ”Regarding our record, I can comfortably say that I don’t know any other team that dealt with as much adversity as this team did, from losing key players to dealing with COVID. I’m proud that we still competed with every team in the conference regardless of our difficulties.”

Carrier said Metress did a great job of maintain a positive environment as well as staying focused on their goals. As one of the seniors, he said he tried to keep the team grounded and focused on winning.

Kennedi Manning, Green’s sophomore forward, played in 13 games and averaged 27.2 minutes while leading the team in scoring at 12.5 points per game. She said the delay to the season was frustrating because of all the work the team did during the preseason.

“Having to quarantine for about a month, it felt like everything we did kind of went to waste and we had to start from scratch again,” said Manning, who scored a season-high 22 points against Flagler on Feb. 13. “The schedule was very challenging. Having back-to-back games with very little recovery time, I can really say it took a toll on my body. To go through so much in such a short period of time and not make the playoffs was really heartbreaking.”

Manning was sidelined early in the preseason and then had to adjust to the work load as well as conditioning. She also lost a family member to COVID-19 during the season, which was “really tough for me.”

“It just felt like if it wasn’t one thing, it was another … I just had to focus on what I could control and continue to work hard through these times,” Manning said.

Moss’ biggest obstacles were dealing with being disciplined and continuing to do well in school, even though they weren’t meeting in person.

“My major requires ample time on campus in order to get work done, so I just had to stay locked in on getting on campus as much as the gym,” Moss said.

Carrier and Moss said one of the highlights to their season was Senior Night.

“It was definitely one of the most special nights as a Jaguar,” Carrier said. “The support my teammates and coaches showed meant a lot to me and to be honored is a memory I will have for life.”

“Just connecting and growing relationships with every one of my teammates, Senior Night was a great night for me and the guys,” Moss added.

Manning said starting the season 3-0 at home was a highlight for her team, also noting that they made their mark defensively in the conference.

“By establishing our defensive chemistry early, it made our team become even closer and more competitive,” she said. “We have so much talent and potential, which just makes me even more excited for next season.”

One of the biggest highlights for the Jaguars came Jan. 20 at Lander, when Metress won his 500th career game. The Jaguars won 99-97 in double overtime in front of a crowd of 262 people. But as Metress said, while he was happy to get the milestone win, everyone understood the protocols in place.

“By the end of the year, we were the only Peach Belt school that did not allow fans,” Metress said, “But as I explained to people often, we are a medical school, and we have hospitals full of patients suffering from COVID complications, so it was understandable.”

Green said her highlight was that they were competitive, resilient and finished higher than predicted.

“We started conference play 3-0 again this season. … During that time, we were holding teams to 45 points a game,” she said. “I was able to experiment with some defensive schemes that my players’ adapted to quickly. I am excited to build on this season next year.”

Metress and Green look back on the challenging season with hope that what they had to overcome will make them bigger, stronger and better in the seasons to come.

“I love my team’s resilience, togetherness and competitiveness,” Green said. “Each year, we have climbed the standings. We will use all the ups and downs of this season to help us to continue to climb the ladder and become champions.”

While winning his 500th was special, Metress said the highlight for him was a photo of Timmy Sellers dunking at home with no fans in the stands, but the whole bench cheering their hearts out.

“Guys are on their feet, leaping in the air … true sense of team in that photo,” Metress said.

His next highlight was the drive-by Senior Day recognition for Carrier and Moss, who “kept unbelievable attitudes in difficult circumstances.”

Moss said he is ready to start his career as a graphic designer once he graduates and plans to continue to explore different avenues and life opportunities.

Carrier hasn’t decided what he’s going to do yet after graduation, though he is leaning toward pursuing his Master in Business Administration and “still has decisions to make.”

Either way, both have nothing but high praise for their time at AU.

“I am beyond grateful to have been part of this team and can’t thank you guys enough for the support during my time here,” Carrier said.

“I love and appreciate every one of you guys for making sure my five years here was fun, comfortable and just like home,” added Moss, who is originally from Clinton, Maryland. “The love shared down here was amazing, and to Coach Dip, thanks for an eventful college career, thank you for pushing me every day to be better, and thanks for giving me the opportunity to represent the Augusta Jags.” 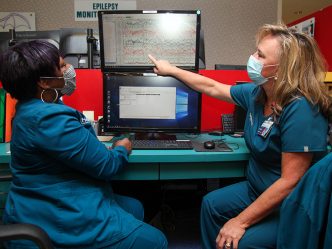