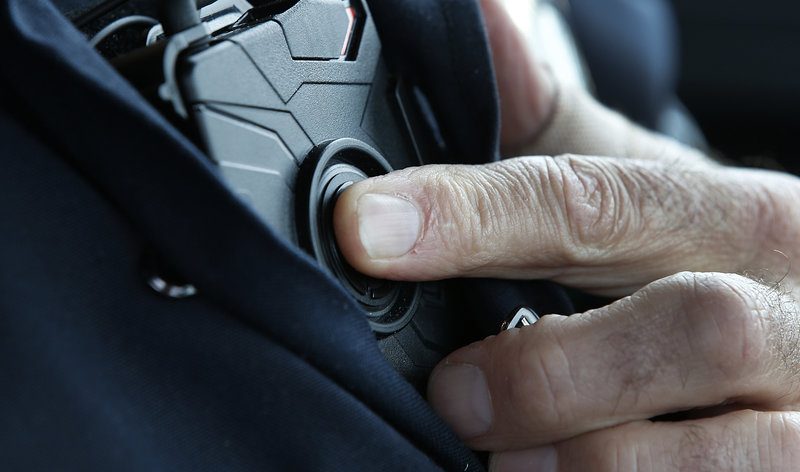 Five years ago, the shooting death of 18-year-old Michael Brown Jr. by a police officer in Ferguson, Missouri, set into motion drastic changes in policing and a public call for widespread adoption of body-worn cameras across the United States.

These small cameras, typically mounted on officers’ shirts, were adopted by law enforcement agencies throughout this country in hopes of building transparency and trust with the public.

As of 2016, 47% of law enforcement agencies in the United States – including 80% of the largest departments in the country – have adopted the body-worn cameras, resulting in approximately 15,000 full-time officers wearing the devices.

In a recently published article in The Pursuit Journal titled, “Is the Juice Worth the Squeeze on This One? Examining officer and command staff support and unexpected consequences of body-worn cameras,” Drs. Melissa Powell-Williams, Todd Powell-Williams and Candace Griffith of Augusta University’s Department of Social Sciences explored the impact of body-worn cameras on the Richmond County Sheriff’s Office.

“One of the things that we were initially concerned about was, to what extent might this mediating technology influence, either positively or negatively, officer discretion,” said Todd Powell-Williams. “Would these body-worn cameras alter the ability for an individual officer to apply their discretion? In other words, as an officer, would it alter me being able to use my discretion to decide if I am going to effect an arrest or not?”

After interviewing several of the law enforcement officers, Todd Powell-Williams said they discovered the body-worn cameras actually do limit the officers’ discretion.

“They were telling us, ‘I have made more piddly marijuana arrests in the last six months than I ever have in my career,’” Todd Powell-Williams said. “And the reason being is, in the past, if officers caught you with a gram of marijuana, they would make you dump it and grind it into the pavement and that would be that.

“Well, now, it is on camera, so they felt like, ‘Well, what now?’ They felt, with the body-worn camera, they had no choice but to make an arrest.”

The perception of body-worn cameras

In their research, the sociologists from Augusta University found that the majority of Richmond County officers “overwhelmingly support” the body-worn camera program and believe their usage has and will continue to improve police and community relations overall.

However, few officers in their study felt the devices have resulted in positive change in their own behavior in regard to community relations, following protocol or use of force.

“The number of years an officer has served in law enforcement increases the likelihood to report that wearing a body-worn camera has reduced their use of force and makes them more mindful in the field,” the research article states. “Interview data reveals that while officers are not likely to report changes to their adherence to formal policies or procedures, they are changing their demeanor, language and emotional control when interacting with the community.”

But officers noted that increased surveillance has improved the behavior of other officers who may violate procedure or engage in excessive force, the article stated.

The article calls for more research that broadens empirical measures of “effect” and “change” of body-worn cameras to officer and community relations.

“At the heart of both of those two things is accountability,” Melissa Powell-Williams said. “Accountability for use of force and accountability coming in the form of being monitored and having increased surveillance.”

The article regarding race is nearly completed and will be published soon, she said.

“That article will get at how, the more likely officers are to experience racial tensions in their job, the less supportive they are of body-worn cameras,” Melissa Powell-Williams said. “Which we actually thought would be the opposite.

“The thought was, the body-worn cameras would sensitize people to issues of race because they will be more accountable since their interactions are being recorded,” she added. “So, the responses were counterintuitive, which was interesting.”

Partnering with the sheriff’s office

“I am beginning a project, partially supported by a fellowship from the Center for Social Science Research at Augusta University, where I am going to be doing content analysis of body-camera footage,” said Todd Powell-Williams. “It will be fascinating because the Richmond County Sheriff’s Office has hundreds of thousands of video clips that are all contained in a server there.”

In fact, Todd Powell-Williams has participated in a handful of police ride-alongs with the sheriff’s office over the past few months.

“They were unbelievably eye-opening,” he said. “It’s one thing to interview the police and maybe have knowledge of what crime really looks like in Augusta by looking at the stats and looking at the stats laid on a map. But it’s another to see what the realities are in these neighborhoods and what the realities are for these patrol officers on the streets.”

The team of sociologists at Augusta University said they deeply respect the command staff and officers in the Richmond County Sheriff’s Office for agreeing to partner with Augusta University’s Department of Social Sciences and discuss these sensitive topics.

“There are a lot of really good people who work at the Richmond County Sheriff’s Office,” Todd Powell-Williams said. “They are top-notch professionals in law enforcement. And people may ask, ‘Why are they letting us do this? Why are they willing to work with us?’ The answer is, because they value research. They realize research can help them better serve the community.”