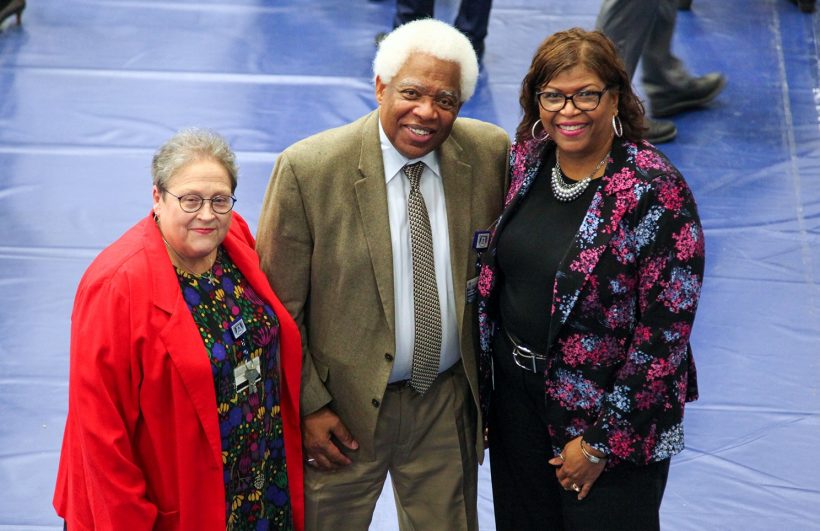 The Augusta University Arsenal Bell rang out three times, echoing through the stands at Christenberry Fieldhouse.

Only, some of the 809 employees being recognized for five to 45 years of service were seated on the gymnasium floor. Group by group, they stood and were thanked for their hard work.

The bell ringer, Dr. Joseph Hobbs, chair of the Department of Family Medicine, was the lone employee being recognized for his 45 years of service, the longest tenure of those honored on Dec. 10.

Hobbs said it is unusual for a professor to spend his entire career at one institution. However, Augusta University has grown so much that it is no longer the same place he began his career.

“I always tell people (when they say) you’re in the same place, ‘No, I’m not,’” he said. “Because this place is not the place that it was when I started. It evolves. If you start taking snapshots of this environment, you have been in different settings.”

His experience has allowed him to learn and network with top physicians from around the world.

Hobbs said he discovered science as a student at A.R. Johnson Health Science and Engineering High School, which then was an all-black junior high school. Like many at that age during the years of space exploration and the space race, he became interested in science — particularly astronomy. His teachers introduced him to the scientists at the Medical College of Georgia.

Though he was still interested in astronomy and biochemistry, he was invited to follow the chief of hematology oncology on rounds on Saturdays while in college. Through that experience, he discovered a love of teaching and worked on a dual degree program — a medical degree and a doctorate.

“The thing that drove me was my desire to be a teacher,” he said. “I did not apply to be on the faculty because I did not think that I would be accepted on the faculty.”

He was invited nonetheless.

Forty-five years later, he said he only considered leaving once. That was when he was offered the position of department chair at a college in Galveston. When his boss caught wind of it, he asked, “What makes you want to go to Galveston?”

“(I said) I want to be a chair, you know?” Hobbs said. “He said, ‘Well, suppose the opportunity was here?’ I said, ‘Oh, well nobody’s talked to me about that, you know?’ And then the rest is history.”

After the ceremony, fellow faculty and staff stopped to congratulate Hobbs on his long, successful career. He is still serving out his tenure as chair.

At a closing reception, attendees enjoyed refreshments and posed for commemorative photos by the Arsenal Bell.

Asked what’s next, Hobbs replied, “People expect me to have an answer for that and you know, quite frankly, I don’t.”