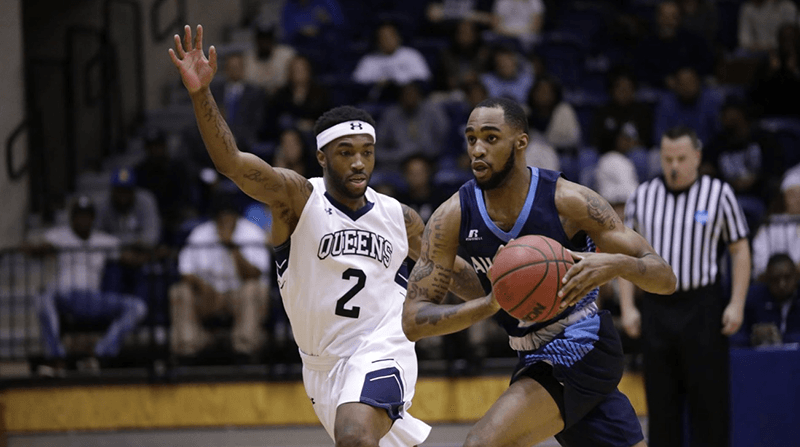 Augusta (24-8) reached the second round of the regional tournament for the eighth time in school history and couldn’t hold off the home team as their season came to an end.

The Jags and Queens (30-3) had not met since the semifinal round of the 2011 NCAA DII Southeast Regionals. The Royals fell 71-60 in the game that was held at Augusta. The Jags still own a 3-1 record against Queens.

Queens faces No. 2 seed Lincoln-Memorial in the regional final Tuesday, March 14 at 7:00 p.m. in The Levine Center.

Queens was led by Todd Withers’ 25 points and 13 rebounds. Mike Davis scored 19 and Ike Agusi 14 points. Augusta outscored the Royals 40-20 in the paint, but they committed 13 turnovers to Queens’ five.

Augusta scored the opening bucket on Fields’ layup and the game began with back-and-forth play for the first five minutes. Queens rallied for a 15-7 lead at the first media timeout, but a 9-2 Augusta run sparked a close affair as AU trailed by one with 11:45 in the first half.

Queens tried to quick layups, but junior Kyle Doyle blocked both shots in the paint to keep a one-point game intact as Augusta took a 19-18 advantage. Queens committed to the glass and led 25-19 after a fast-break dunk lifted the home-team crowd.

Monroe nailed two straight three pointers from the left side to tie the game at 25-all and three and-one plays ignited the visiting team to a five-point lead at the half. Sherrill sunk a three pointer to put Augusta up by eight and they went into the half up 49-43.

Monroe had 12 and Sherrill 10 at the pause to guide the Jaguars. Towards the start of the second half, the Jags built their largest margin with a 13-point advantage

Queens cut it within five, but they were called for a technical foul and Sherrill canned four free throws for AU to stay ahead by eight. The Royals were relentless on defense in the second half and forced two turnovers in the 11thminute to make it 64-60.

Augusta gave up an offensive rebound to the Royals with six minutes on the clock and they hit a big three to get within two points. Down 73-71, Queens got another try from Withers to make it 74-73 – their first lead of the second half.

Under two minutes, the Jags were behind by two when the Royals hit another deep shot from beyond the arc and went on to charity stripe to build a six-point lead with 40 seconds to go. Sherrill connected on a trey at the top of the key, but a slew of Queens’s free throws held off the Jags.