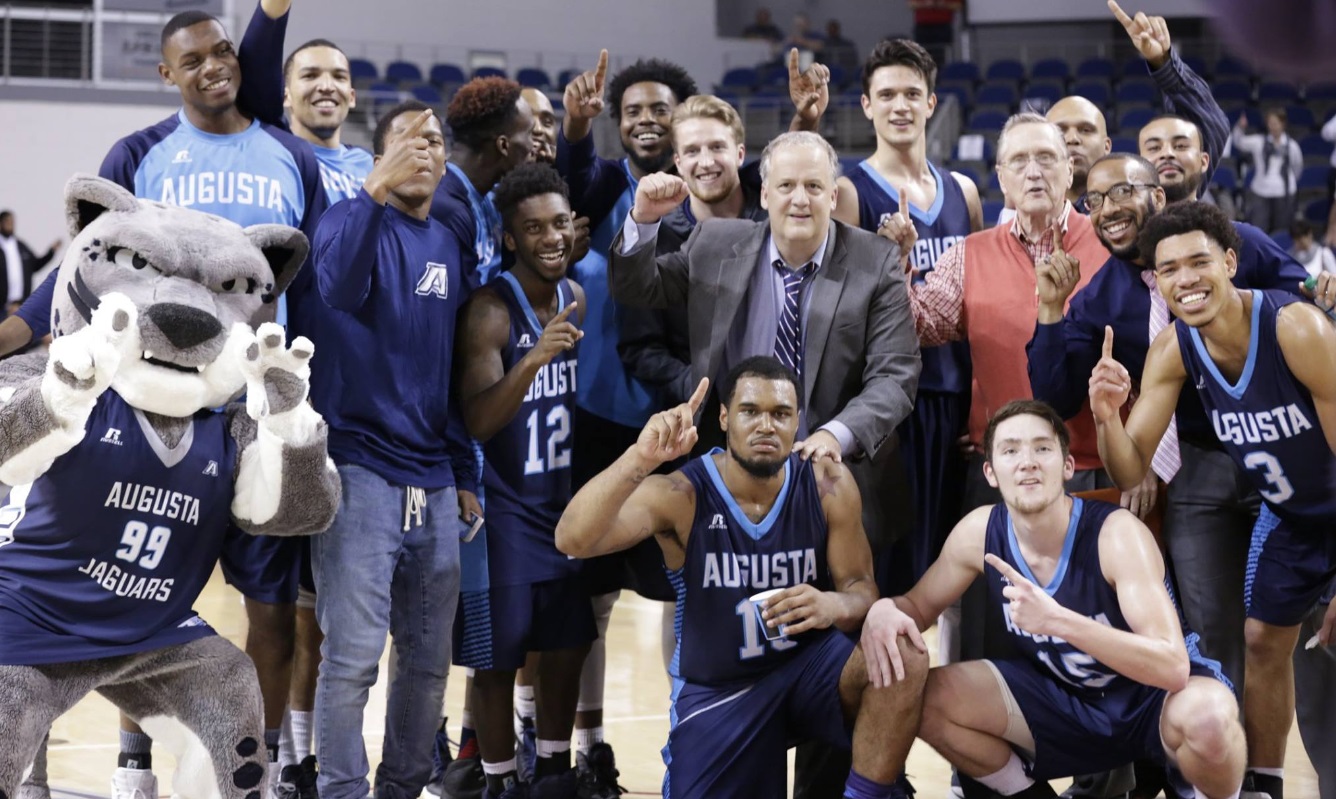 AIKEN, S.C. – The Augusta University men’s basketball team outscored USC Aiken 12-8 in overtime to win an 87-83 game and claim the Peach Belt Conference East Division title. The Jaguars finish the regular season with the best record in the league and receive an automatic birth to the NCAA Tournament.

The stakes were high for the rivalry matchup between Augusta (22-6, 14-5 PBC) and USCA (18-8, 12-7 PBC) in the final regular-season game. The Jags captured its sixth PBC regular season title and its first since the 2010-11 season. It is the fifth for head coach Dip Metress.

Augusta is the top seed in the east, finishing in a tie atop the division with UNC Pembroke. In a two-way tie, the PBC tiebreaker first looks at head-to-head results. Augusta and UNCP split their two meetings. The next tier in the tiebreak is in-division record, where Augusta takes the edge with a 9-3 mark against the east. USC Aiken is #3 and Lander will be the #4 seed in the east.

Augusta hosts Montevallo, the #4 seed in the west, on Saturday, Feb. 25 at 4:00 p.m. in Christenberry Fieldhouse for the Peach Belt Conference Quarterfinal.

Senior Keshun Sherrill gave the Jags 20 first-half points and ended the night with 33. It was the 103rd time in his 118 career games where he has scored double figures. Sophomore Vlad Cobzaru added 11 points.

Augusta trailed by five through the first five minutes, but a three pointer from Ja’Shawn Brooks evened the game at 15-all. The scored stayed within five points until the 6:37 mark when Brooks buried another jumper for a 28-21 lead. AU owned the advantage and led 43-35 at halftime.

The Jags shot 50 percent from the floor in the opening 20 minutes and held USCA to 34.5 percent shooting. At the start of the second, Mark Matthews knocked down back-to-back treys as USCA clawed back into a 47-46 game with 15:47 to go.

A dunk from Robert Hill gave USCA the lead for the second time of the second half and ignited the home crowd. The second-half score changed sides10 times.

With under five minutes to go, AU trailed, but Ben Ursich made a three and Sherrill’s high-glass layup retook the lead for Augusta 70-69. USCA tied the game 75-all with 25 seconds to play and forced overtime.

Up 80-79 with 1:47 to go in OT, Aiken was called for a technical foul and Sherrill hit two free throws. The Pacers poked Sherrill again for a foul and he ended their night with a few more free throws as Augusta won 87-83.

Written by Taylor Lamb
Homecoming Week in pictures
FacebookTwitterPinterestWhatsApp
Wrap it up: A bus gets its look