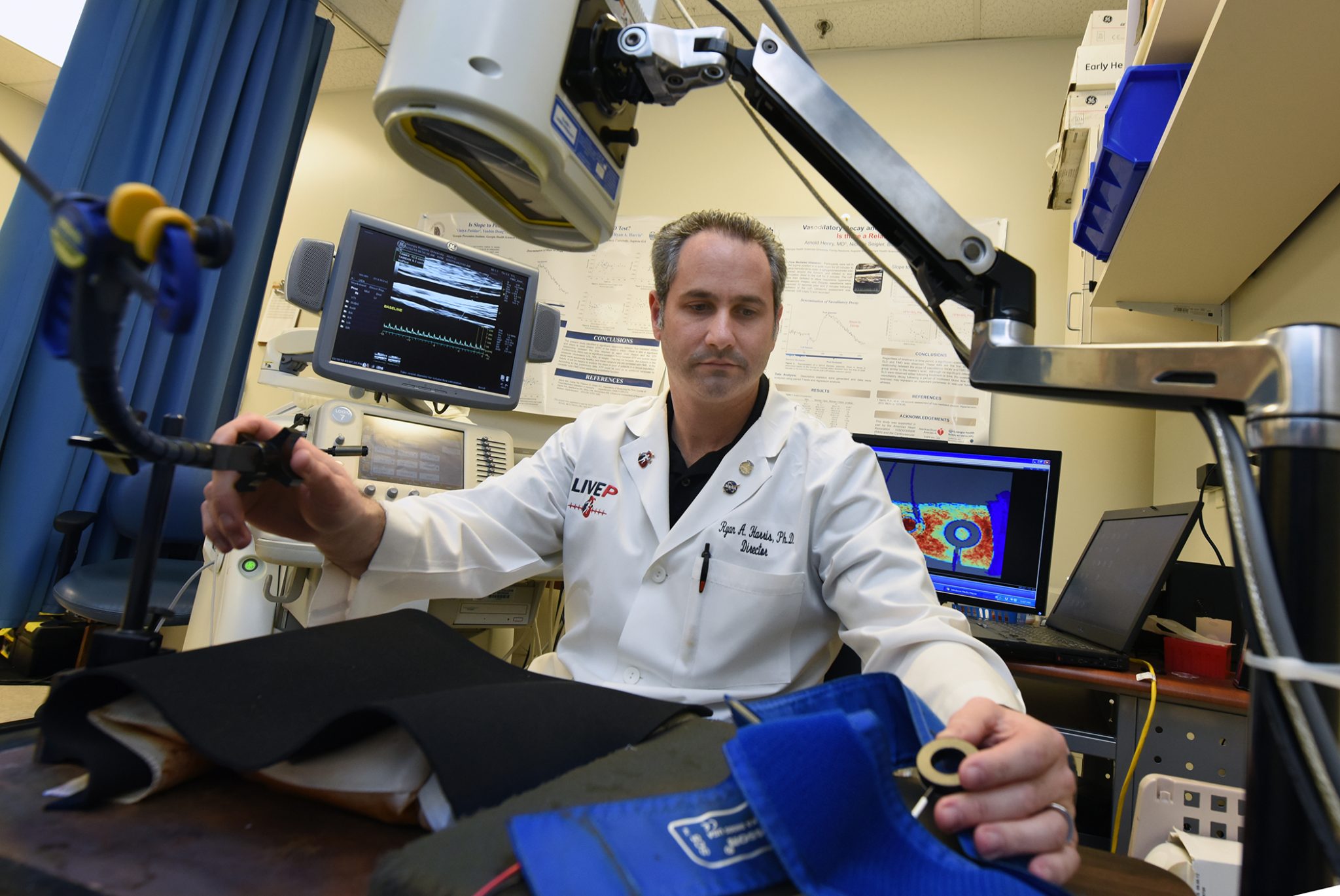 AUGUSTA, Ga. – The high estrogen levels that typically afford younger women protection from cardiovascular disease appear to instead multiply their risk if they have type 1 diabetes, researchers say.

A new study is examining the blood vessel health of these women during normal estrogen peaks and valleys and seeing whether treatment with over-the-counter supplements can help restore protection.

“Why does this disparity and risk exist?” says Dr. Ryan A. Harris, clinical exercise and vascular physiologist at the Georgia Prevention Institute and Department of Population Health Sciences at the Medical College of Georgia at Augusta University.

Estrogen seems to be key in the early, rapid aging of their cardiovascular system. Harris’ team has early evidence that in diabetes the sex hormone estrogen produces a double whammy that increases levels of damaging oxidative stress while dramatically decreasing blood vessels’ ability to dilate. More typically estrogen does just the opposite.

“When you have diabetes, estrogen turns into a bad guy,” Harris says. “It actually causes blood vessel constriction when you have high levels of estrogen.”

“The whole point of the grant is to determine why this happens and what we can do about it,” says Harris, principal investigator on a new $3.3 million grant from the National Institutes of Health.

“Once we can identify why estrogen acts like a bad guy, why estrogen causes vasoconstriction instead of vasodilation in these women, then we could introduce non-pharmacological treatments throughout the menstrual cycle that could ultimately reduce their cardiovascular disease risk,” Harris says.

Rather than giving the women more estrogen, they are using the natural high and low points of the sex hormone over the course of their natural cycle. They will look at vascular health before and two hours following treatment or placebo.

Some women with type 1 will take a cocktail of antioxidant vitamins C and E along with alpha lipoic acid, an antioxidant made by cells to help them use glucose as energy and eliminate free radicals produced from that conversion. While antioxidant therapy for a wide range of ills has gotten mixed results, the Harris team has documented their cocktail’s impact in aging adults and COPD and they have early evidence it also works in these women. In fact, the MCG researchers are the first to study the impact of antioxidants in women with type 1 throughout their menstrual cycle, Harris says.

Other women will take resveratrol, a compound found in the skin of red grapes – and red wine – as well as peanuts and berries, and also thought to work as an antioxidant that can directly activate the protein Sirt1. Sirt1 lowers the reactive oxygen species produced by the endothelial cells that line blood vessels and increases the availability of nitric oxide, a powerful natural dilator of blood vessels. Levels of Sirt1 naturally increase in the high-estrogen days of the cycle, but the Harris team has preliminary evidence that diabetes decreases that healthy increase. In fact, Sirt1 levels are generally lower in people with diabetes.

A final group of women with type 1 will take a placebo.

“We are targeting two different pathways that we think contribute to why estrogen is bad in the presence of diabetes,” Harris says.

He expects the response of those treated to normalize to that of healthy controls.  His lab has already seen an increase in blood vessel health at peak estrogen periods even in women without type 1.

For this study, the healthy female controls will not be treated but, for comparison sake, men with type 1 diabetes will be studied at two similar points and undergo the same treatment strategies. Men with type 1 do have an increased cardiovascular risk over those without it, Harris notes.

The investigators suspect that the more rigid blood vessels they see in young women at peak estrogen levels become cumulative, contributing to their higher risk of cardiovascular disease.

The current study should provide more evidence and insight, but a larger study may be needed before making treatment recommendations to patients, Harris says.

Peak estrogen levels occur during ovulation, which enables an egg to be released and the uterus to prepare for a potential pregnancy. This occurs during about day 12-14 of the menstrual cycle. The first day of bleeding is considered day 1 and estrogen – and progesterone – levels are low. Women with type 1 typically cycle normally with these usual peaks and valleys, Harris notes.

Sirt1 has been implicated in both type 1 and 2 diabetes, including playing a role in increasing inflammation in type 1. Sirt1’s many cardioprotective benefits include improved endothelial function and glucose homeostasis, reduced inflammation and lipid metabolism, even lower blood pressure.

For more information about the study, contact GPI research coordinator Jacob Looney at 706-721-5483.

Written by Toni Baker
Student turns a year’s worth of trash into art exhibition
FacebookTwitterPinterestWhatsApp
Looks, not experience, affect the way some voters judge female political candidates’ worth