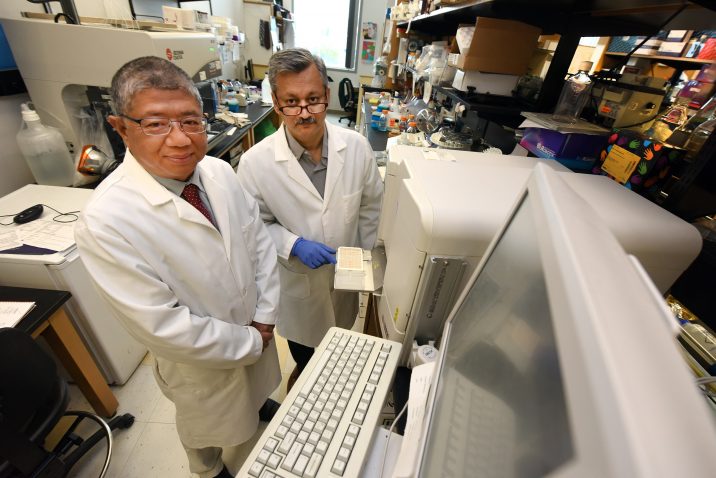 The sugar coating on cancer cells helps them thrive, and a new study indicates patients with cervical cancer who make antibodies to those sugars appear to do better when they also receive internal radiation therapy.

Scientists looked in the blood of 578 Peruvian women with stage 2 and 3 disease before they ever began treatment and found those who ultimately fared best had naturally higher levels of antibodies that target six classes of sugars, or glycans, associated with cervical cancer. The treatment of those who did best included a form of internal radiation called brachytherapy, known to rev up the immune response.

All our cells are sugar coated and so are cancer cells, which use glycans for a variety of fundamental functions like cell proliferation, disease spread, and immune protection, says Dr. Jin-Xiong She, director of the Center for Biotechnology and Genomic Medicine at the Medical College of Georgia at Augusta University.

The fact that these antibodies can neutralize glycans on cancer cells so they can’t be used may be the primary reason they are beneficial to cancer patients, says She, Georgia Research Alliance Eminent Scholar in Genomic Medicine and corresponding author of the study in the journal Gynecologic Oncology.

Pap smears, which look for precancerous cervical changes, have largely resulted in the significant decrease in the number of cases of cervical cancer and related deaths in the U.S. over the last 40 years, according to the Centers for Disease Control and Prevention. But in less-developed countries like Peru, where screening, prevention vaccines and treatment are less available, about half of women have at least stage 2 cancer at diagnosis, which likely calls for a combination of surgery, external and internal radiation and chemotherapy. Still less than half of patients have access to those therapies, the scientists write.

Limited access to therapy and the more advanced stage when the disease is typically found increase the need to identify optimal treatments and biomarkers that can help determine what those are, the scientists say. They think anti-glycan antibody levels may provide that answer.

Like all cells, cancer cells make the complex glycans on their surface, but these sugars dramatically modify the function of the proteins made by the cell so they do cancer’s bidding, Purohit says. “Antibodies will bind to those glycans so they will not be available to promote the tumor,” he says. The binding attracts other immune cells as well. “The complement proteins will gather together and attack the cell, lyse it open,” Purohit adds. Unless you don’t make the antibodies.

“Like the coronavirus, when some people get infected, they produce antibodies to neutralize the virus. Other people don’t do this, or don’t do it very well, and may get very sick and die,” says She.

“The patients who are naturally producing higher titers of antibodies have a more competent immune system and the brachytherapy comes in and further activates the immune response,” says She. He further suspects less direct external radiation doesn’t do that, or at least not as well.

Depending on the type and dose, radiation can be a good partner in boosting or suppressing immunity, they note. Brachytherapy, in which radioactive material in the form of seeds, ribbons or capsules, is placed near or inside a tumor, is used in a variety of cancers in conjunction with and independent of external beam radiation, and is generally considered to have less side effects than external radiation. Most of the patients they studied received both internal and external radiation.

“Brachytherapy is a good treatment but it works better in patients who have antibodies,” says She. His and his colleagues’ long-term goals include helping all patients mount this natural, frontline immune response to cervical and other cancers.

They screened for 177 glycans and ultimately found 13 anti-glycan antibodies against 6 classes of glycans associated with significantly better survival, and that the antibodies made a bigger impact on survival in patients with the more advanced stage 3 cervical cancer.

The scientists note that while there is some overlap in antibodies associated with different cancers, there are likely distinctive ones as well. Elevated levels of the anti-glycan antibodies also have been shown to be predictive of survival in cancers like melanoma and prostate.

She thanked the women of Peru and the clinic established for them by Dr. Daron Ferris, a study coauthor and professor in the MCG Department of Obstetrics and Gynecology and the Georgia Cancer Center, for enabling the studies.

“This work is made possible by the great work done by Dr. Daron Ferris who years ago saw the need for testing and treatment for the women of Peru and provided it to them,” She says.

Ferris was a leader in clinical trials of the first vaccines for human papillomavirus, the cause of the vast majority of cervical cancer. In 2008, he founded the nonprofit CerviCusco Clinic to enable screening, vaccines and treatment for Peruvian women who have one of the highest rates of cervical cancer in the world.

“In the process of providing great care to patients, he also enabled the collection of invaluable samples that make possible research like this that will further improve prevention and treatment,” She says.

The MCG scientists reported in 2018 that they had developed a way to identify biomarkers for a wide range of diseases by assessing the sugars coating our cells with a high-volume, highly sensitive Luminex multiplex glycan array, noting that there are not good biomarkers for many diseases that are killing us. The system uses a patient’s blood or serum to find which sugars a patient is making antibodies to. She and his colleagues expect that broad-range glycan analysis may one day be part of an annual exam like a cholesterol level check.  Glycan antibodies are already used to determine good matches for blood transfusions and organ transplants.

Normally sugar coating helps cells know which other cells to bind to and helps them stick together, helps ensure cell contents stay inside, even provides protection from invaders like viruses and bacteria. Cancer may also use glycans for protection, sending them out to help suppress the immune response and to essentially fertilize the tumor microenvironment by doing things like increasing signaling that promotes the growth of blood vessels and other essentials the tumor needs.

The research was supported by the National Institutes of Health and the Georgia Research Alliance.