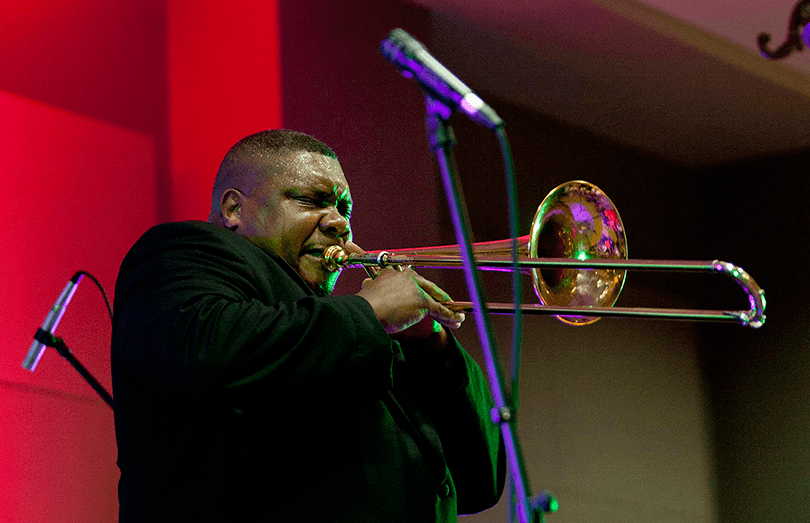 Wycliffe Gordon finished up a workshop in Iowa City on Oct. 23, 2004, and he was scheduled to fly out that night. But he decided to stay in town to see Aretha Franklin perform at Hancher Auditorium.

He was in the audience – “where I rarely get to be” – and Aretha was singing Ave Maria. She went for the high note, and she didn’t hit it.

“She was up there in her beautiful white gown, and she pointed her finger to the sky,” he recalled. “It could easily have been, ‘Aw, Aretha didn’t hit the note!’ But it wasn’t. Everyone clapped for her because after all the years of the power and pathos of her singing, we heard the note, we felt the note.”

Gordon, world-renowned trombonist and director of jazz studies at Augusta University, performed with Franklin for the first time when he was a college student. Key band members would travel with her, and her music director would hire local musicians to complete the orchestra.

“I was in Tallahassee when I got the call,” he said. “Getting a chance to meet her was great. To perform with her … you never forget the experience.”

Gordon played with her multiple times over the years and performed before her on other occasions. That gave him the opportunity to talk to her backstage.

“Her voice was the tool she had,” he said. “It was a manifestation of who she is on the inside, who she is as a person.” With it, “she could reach inside of you and try to pull the best of yourself to her.”

Gordon was on the way to the AU Summerville Campus to teach a class when a friend texted him the news that Aretha Franklin, the legendary “Queen of Soul” died at her Detroit home at the age of 76.

“I don’t think it’s hit me yet,” he said. Moments later, he was talking about his favorite song of hers, Precious Memories on her Amazing Grace album, when he teared up. “So here it comes,” he said.

“I’m very sad to lose someone I consider a friend,” he said. “But she was a friend to everyone.”