Before he was a Pulitzer Prize winner, he was the force behind Black Panther’s phenomenal soundtrack 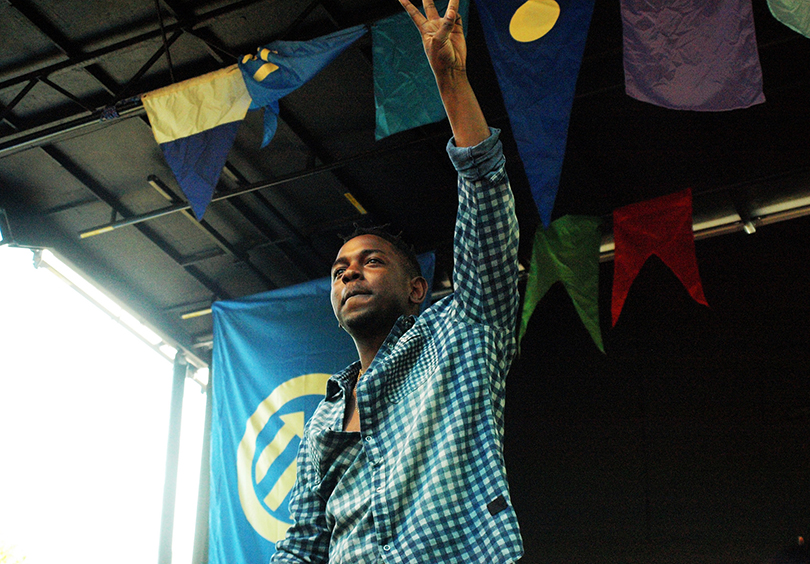 For many moviegoers, 2016’s Captain America: Civil War was a first introduction to the Marvel Comics character T’Challa, king of the fictional African nation of Wakanda.

Since then, the name Black Panther has become synonymous with blockbuster action for a number of reasons, not the least of which being its killer soundtrack. Co-produced and curated by rap legend and Pulitzer Prize winner Kendrick Lamar, the Black Panther album promises to be unlike anything superhero movie audiences have heard before.

But what does that mean?

Adam Diehl, lecturer in the Department of English and Foreign Languages, teaches a course on Lamar’s 2012 album good kid, m.A.A.d city. He said spotlighting Lamar’s music speaks volumes about Marvel’s hopes for its latest hero showcase for a number of reason.

“[Lamar] is at his commercial height—right now, the No. 4 most-listened-to artist in the world on Spotify,” Diehl said. “I think Kendrick’s conscious-rap reputation, combined with the commercial-rap demonstration on [the album] DAMN., will give Black Panther even more weight and intentionality at a time when black America needs a new hero or set of heroes.”

Giving rise to new heroes is certainly the name of the game. The film features a black director (Ryan Coogler) and black screenwriters (Coogler and Joe Robert Cole). It’s moved along by a predominately black cast, including the immensely talented Lupita Nyong’o and Chadwick Boseman in the titular role. Its release during Presidents’ Day weekend, during Black History Month, makes an obvious statement. Marvel is holding nothing back in its attempt to make Black Panther a significant cultural movement.

According to Diehl, the addition of Lamar’s musical talents only sets the bar that much higher.

“I think Kendrick was the best person for Marvel to approach for several reasons,” he said.

The first, and perhaps most obvious reason is Lamar’s star power.

“His work prior to 2017 won over the hip-hop community,” Diehl said. “Everyone in that genre wants to be Kendrick Lamar, much in the same way every band in the mid-1960s wanted to be The Beatles.”

The second, his far-reaching appealing.

“Perhaps most important in the context of the film and the comic, Kendrick’s music feels deeply rooted in the music of the past, especially soul and funk of the 1970s,” he said. “Kendrick—while still appealing to 2018 audiences—can win fans of ‘old-school hip-hop’ to the film.”

Ultimately, though, Diehl said Lamar was the best choice for Marvel because the two just fit.

“I think Kendrick’s involvement is a mutual compliment,” he said. “He wanted to work on such an ambitious movie, and they wanted the most compelling artist of the day as the centerpiece of their soundtrack.”

Diehl said he’s listened to the album only once since its release on Feb. 9, but that the production, much of which was overseen personally by Lamar, was top-notch and state-of-the-art. Unsurprisingly, several of Lamar’s own songs found their way into the mix, and those tracks alone are more than worthy of any comic book superhero. Like the Blank Panther himself, they are strong, proud, and infinitely self-reflective.

“I think the Kendrick features are meant to fit within the film and the context of its release, but they also serve as a shadow of sorts to the DAMN. album,” Diehl said. “Songs like ‘Black Panther’ feel as schizophrenic as songs like ‘DNA’ or ‘DUCKWORTH,’ while ‘All the Stars’ could compete with ‘LOYALTY’ or ‘LOVE’ as Kendrick’s most pop-inspired works.”

For all his talent and drive, though, Lamar’s music is only a small piece of a much greater whole. As a result, his success with the Black Panther album will also be the shadow of much deeper story.

“Black Panther could become a vehicle for black pride and hope,” Diehl said. “It would not only be the first hugely-successful superhero movie featuring African Americans in front of and behind the camera, but it could also become the highest-grossing super-hero film of all time.”

That’s a strong statement, especially at a time when young African Americans are clamoring for big-screen heroes they can relate with.

“That would be a testament to the audience’s support just as much as it would be to the film’s execution of its aims,” Diehl said. “And Kendrick’s music would be playing the whole time.”